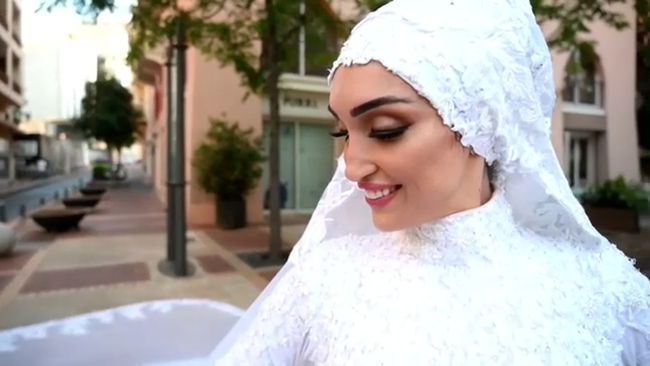 Video captured the terrifying moment when a bride, who was posing for photos on her wedding day, was interrupted by the massive explosion in Beirut that killed at least 135 people on Tuesday.

The video shows the bride, Dr. Israa Seblani, standing outside her wedding venue posing in a full-length gown.

As the photographer pans down to capture a photo of her bouquet, the explosion can be heard as it rocked the city.

The video then pans to show Seblani rushing to safety as smoke fills the street.

“One thing came into my mind, that now my life has changed from wedding, happiness, into a sad moment. Now I’m going to die,” Seblani said after the explosion.

Officials believe more than 2,700 tons of ammonium nitrate ignited and caused the blast. The highly explosive chemical compound, commonly used in fertilizers, had been stored in a warehouse for six years, according to investigators.

It was the worst, most destructive single explosion to strike Lebanon, a country filled with destruction over its history, which included a civil war from 1975 to 1990, conflicts with Israel, and periodic terror attacks.

A senior U.S. Defense Department official and member of the U.S. intelligence community said there were no indications the massive explosion was the result of an attack by either a nation state or proxy forces.