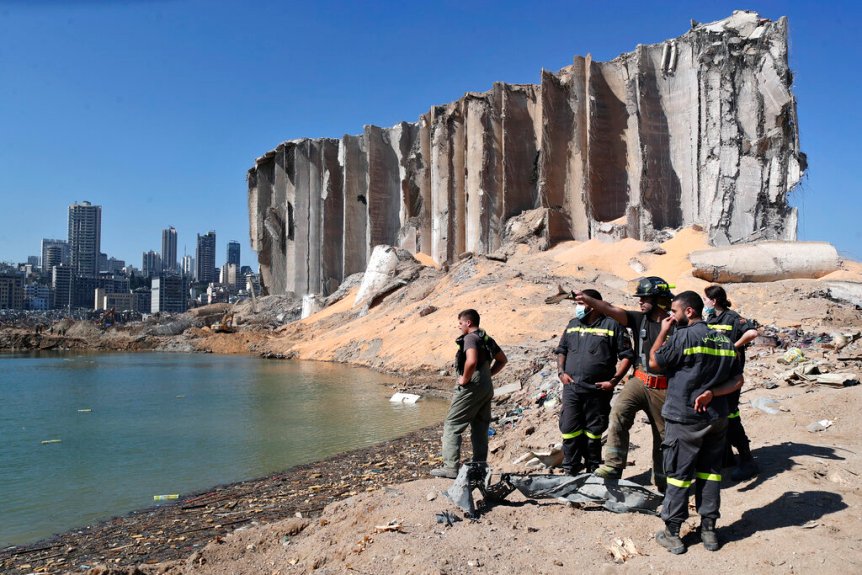 Outside the port area, women cried as they waited for news about missing relatives.

Among the four bodies recovered in the last 24 hours was that of 23-year-old Joe Akiki, a port worker missing since Tuesday’s explosion. His body was found in the rubble near a grain silo that was shredded along with other buildings in the port.

The explosion also devastated nearby residential neighborhoods, blowing out windows and wrecking facades for miles around.

“Our experience shows that we can find people alive until up to 72, 75 or 80 hours after an explosion or an earthquake, so for now we are still in time and we cling on to this hope,” said Col. Vincent Tissier, head of the French team.

The blast apparently was caused by the ignition of 2,750 tons of ammonium nitrate, a chemical used for explosives and fertilizer that had been stored at the port since it was confiscated from an impounded cargo ship in 2013.

An investigation has been started by the government, which has come under mounting criticism after many Lebanese blamed the catastrophe on negligence and corruption.

Several countries have sent search and rescue teams to Beirut, where dozens are still missing.

A team of 55 French rescuers that began work Thursday has found four bodies, according Vincent, of the French Civil Protection. Lebanese firefighters are also working at the demolished port, where bulldozers and excavators churned through the rubble.

An initial government assessment said 300,000 people — more than 12% of Beirut’s population — had to leave homes damaged or left uninhabitable by the explosion. Many of them have since returned, or are staying in second homes or with friends and relatives. Officials have estimated losses at $10 billion to $15 billion.

Damaged hospitals, already strained by the coronavirus pandemic, are still struggling to deal with the wounded.

The investigation is focusing on port and customs officials, with 16 employees detained and others questioned. But many Lebanese say it points to much greater rot that permeates the political system and extends to the country’s top leadership.

For decades, Lebanon has been dominated by the same political elites — many of them former warlords and militia commanders from the 1975-1990 civil war. The ruling factions use public institutions to accumulate wealth and distribute patronage to supporters. Thirty years after the civil war ended, power outages are still frequent, trash often goes uncollected and tap water is largely undrinkable.

Even before the blast, the country was mired in a severe economic crisis that was also widely blamed on the political class. Unemployment was soaring, and a collapse of the local currency wiped out many people’s savings, That will make the task of rebuilding after the blast even more daunting.

Macron said France would lead international efforts to provide aid but would not give “blank checks to a system that no longer has the trust of its people.”

France, which has close ties to its former colony, has also sent a team of 22 investigators to help probe the cause of the blast. Based on information from Lebanon so far, France’s No. 2 forensic police official, Dominique Abbenanti, said Friday the explosion “appears to be an accident” but that it’s too early to say for sure.

In an interview with The Associated Press, he predicted “the death toll will grow.”

French investigators are involved at the request of Lebanon and also because one French citizen was killed and at least 40 were injured in the blast.

French police could later question witnesses or suspects, said Eric Berot, chief of a unit involved in the investigation. For now, the French team is dividing up zones to cover with their Lebanese counterparts and will use drones to study the area.

“The zone is enormous. It’s a titanic job,” Berot said. The investigation is complicated by the huge scale of the damage and “the Lebanese situation,” he said, referring to the political and economic crisis.

The U.N. human rights office called for an independent investigation, insisting “victims’ calls for accountability must be heard.”

Rupert Colville, a spokesman for the U.N. High Commissioner for Human Rights, cited the need for the international community to help Lebanon with both a quick response and sustained engagement.

He said Lebanon is facing the “triple tragedy of the socio-economic crisis, COVID-19 and the ammonium nitrate explosion.” Colville urged Lebanese leaders to “overcome political stalemates and address the grievances of the population.”