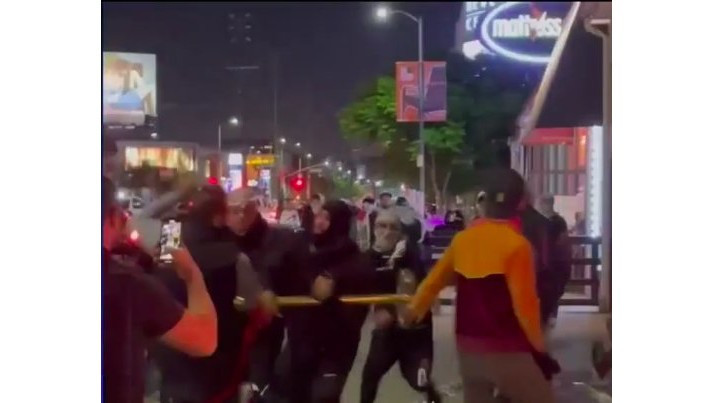 An attack on a group of men at a restaurant in the Beverly Grove area, which was being investigated by police Wednesday as a possible hate crime, drew condemnation from a Los Angeles city councilman who said the victims were Jewish diners targeted by a pro-Palestinian group.

The victims were confronted shortly before 10 p.m. Tuesday outside Sushi Fumi in the 300 block of North La Cienega Boulevard, according to the Los Angeles Police Department, which confirmed the incident was being investigated as a possible hate crime.

Police said one minor injury was reported. No one was arrested in what Mayor Eric Garcetti characterized as an “organized, anti-Semitic attack.”

“Jewish Angelenos, like all residents, should always feel safe in our city … L.A. is a city of belonging, not of hate. There is simply no place for anti-Semitism, discrimination or prejudice of any kind in Los Angeles. And we will never tolerate bigotry and violence in our communities,” he said in a Twitter post.

Councilman Paul Korez said the restaurant incident was one of two attacks directed at Jewish victims over the course of 24 hours.

“Last night, members of a caravan of pro-Palestinian protesters targeted innocent Jewish diners in a vicious attack while they were sitting outside a sushi restaurant, and a separate attempt was made by two drivers to run over a Jewish man who had to flee for his life. Both incidents were captured on video. These were anti-Semitic hate crimes that are unconscionable,” Koretz said in a statement released late Wednesday morning.

“These violent acts will not go unchecked. We will do everything necessary to bring these criminals to justice and to restore order on our city streets. Late last night after being briefed at the Wilshire Division by LAPD, I visited the restaurant where the attack took place and met with a young man who witnessed the entire tragedy unfold,” he said. “I committed to him that we will work diligently to deploy more resources to the region and bring justice for the victims who were brutally beaten. I intend to keep my promise to that young man and to our entire community.

“We will never allow for anyone to strike fear into our hearts because we are Jews. We are not going to allow the violence in the Middle East to spill out onto the streets of Los Angeles. Everyone is entitled to express their opinion but never through violence. Pro-Palestinian protesters cannot be allowed to viciously assault random people on the street because they happen to look or be Jewish,” Koretz said.

According to CBSLA, cell phone video showed a group of men get out of a car and start to attack the diners while yelling racial slurs.

One of the diners, who is not Jewish, told CBSLA that a caravan waving pro-Palestinian flags approached and then began throwing bottles at him and the group he was dining with. The man said he is a photographer and the group was meeting at the restaurant to plan a wedding.

The man said he was physically attacked when he tried to defend the group. He said the attackers used anti-Jewish profanity. He also said he was pepper-sprayed during the attack and had to go to a hospital.

The attackers were described only as men wearing all black. The restaurant apparently was not damaged, police said.

Meanwhile, police are reviewing security video recorded Monday night that appears to show an Orthodox Jewish man being chased by a caravan of people waving Palestinian flags near Rosewood and La Brea avenues, CBSLA reported. The man escaped and was not hurt.

The incidents occurred in the wake of an escalation of the Israeli-Palestinian conflict. At least 200 Palestinians have been killed in Israel’s bombing of Gaza, while Hamas rocket attacks have killed at least 12 Israelis.

The incidents were drawing condemnation from outside the L.A. area.

“As Palestinian protesters attack Jews seated for dinner at a Los Angeles restaurant, and another Jewish individual on foot chased by two cars driven by Palestinian protestors, the scenes of violence that unfolded are undeniable evidence of the dangerous spike in antisemitism in the United States and abroad,” according to a statement released by the Israeli-American Civic Action Network.

“We call upon our elected officials, law enforcement and community leaders to condemn these assaults and demand an end to coordinated acts of antisemitic intimidation, harassment, and violence perpetrated by these protestors,” the statement said.

The organization is described on its website as a “movement of Israeli and American grassroots activists and leaders creating change for a better America, a more secure Israel, and a stronger U.S.-Israel alliance.”