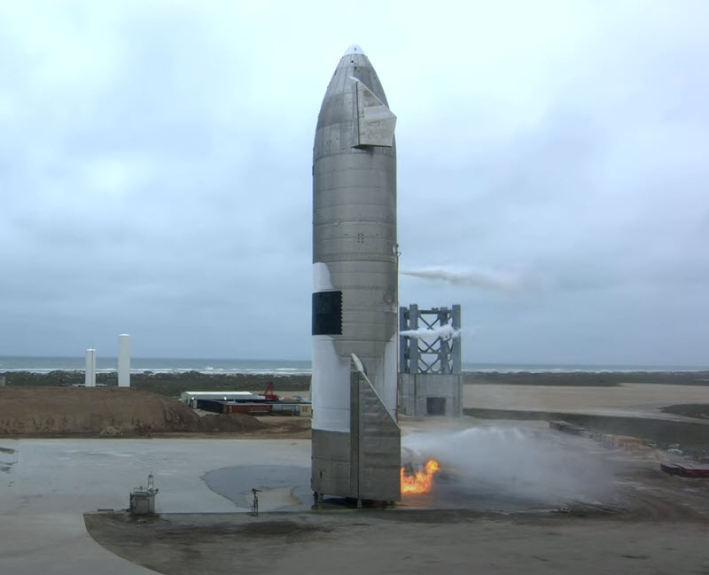 Hawthorne-based SpaceX pulled off a mostly flawless landing of its newest and biggest rocket, as the model’s fifth test flight opened the door to higher altitude excursions.

The Starship SN-15 prototype lifted off Wednesday, May 5, from SpaceX’s seaside launch pad at about 5:24 p.m. local time in Boca Chica, Texas. The rocket flew to an altitude of about 6.2 miles before a controlled descent, based on live video streamed by the company. The landing was marred only by a small fire at the bottom of the vehicle that was extinguished after a few minutes.

The milestone achievement paves the way for more ambitious tests of a rocket that SpaceX founder Elon Musk envisions as a future workhorse for trips to the moon and Mars. NASA recently picked SpaceX to develop a moon-landing system for astronauts with Starship.

The company also envisions the stainless steel behemoth as eventually being capable of reducing travel times across Earth with hypersonic, point-to-point trips.

In four previous tests, conducted since December, the rockets launched successfully and, after reaching an altitude of several miles, demonstrated controlled belly-flops back toward the ground. But each time, problems during landing or after the rocket touched down resulted in spectacular explosions.

Wednesday’s flight was free of any such excitement. The vehicle, powered by its three engines, raced into the cloudy skies over Boca Chica, adjacent to the Gulf of Mexico. It traveled for four minutes to an altitude of about six miles, powering down engines and hovering for a time before beginning its trip back toward Earth’s surface.

During the return to the landing pad, it flipped over into a horizontal orientation to begin its descent. As it neared the surface, it reactivated its engines and brought itself back into a vertical orientation, slowing its approach to the ground in a cloud of smoke. As the vapor cleared, the spacecraft stood upright, plumes continuing to vent from its sides.

SpaceX conceived the Starship as a versatile, fully reusable craft that can carry 100 metric tons. Excluding a booster rocket that creates a two-stage system, Starship is 160 feet high with a 30-foot diameter, able to carry as many as 100 passengers.

A few weeks ago, NASA awarded a contract to SpaceX for $2.9 billion to use Starship to take astronauts from lunar orbit to the surface of the moon.

The contract is part of the Artemis program, and NASA had been expected to choose more than one company to build a moon lander, mirroring the approach the space agency has used for hiring companies to take cargo and now astronauts to the International Space Station.

Musk’s South Bay rocketbuilder has become successful in the launch business, and it is now one of the world’s most valuable privately held companies. Its Falcon 9 rockets have become a dominant workhorse for sending satellites into orbit. It routinely transports cargo and astronauts to the International Space Station. In the last month, it has launched four astronauts to the space station for NASA and later brought home another crew — including Pomona native Victor Glover — in a rare nighttime splashdown on Saturday.

The Hawthorne aerospace company last month struck a deal with the Port of Long Beach, which the city’s harbor commissioners approved, to sublease about 6.5 acres at the site of the former U.S Navy complex. SpaceX will use the space to dock its vessels and offload equipment, port officials have said. The two-year agreement requires SpaceX to pay $107,000 in rent a month.

On Tuesday, SpaceX launched a Falcon 9 rocket from Kennedy Space Center, which deployed the latest round of the company’s Starlink satellites into orbit. “May the force be with us,” said a member of SpaceX mission control after liftoff, paying deference to May 4, also known as Star Wars Day.

The satellites were deployed a little over an hour after launch.

The batch of 60 satellites rode atop a first stage booster flown eight times previous, embracing the company’s reusable components business model. After launch, the booster successfully landed as usual on the drone ship “Of Course I Still Love You.” It marked the 82nd time SpaceX has made a booster recovery.

Amid all the recent aerospace milestones, Musk will attain a different sort of landmark this weekend. He is going to host the iconic NBC show “Saturday Night Live.” Miley Cyrus will be the musical guest on Saturday’s Musk-hosted show.

One of TV’s longest running shows, SNL doesn’t make a habit of tapping business executives host its show, but Musk is far from a stuffy corporate type. A pop star among many tech enthusiasts, Musk is among the richest people on the planet and among its most recognizable. However, his quotes and social posts have repeatedly gotten him into hot water with the public and even spurred legal action.

Musk regularly jokes around on Twitter, where he has nearly 52 million followers and has gotten into legal trouble for making disparaging remarks about critics and hinting that he might lead a buyout of Tesla that resulted him getting fined $20 million by stock market regulators.

This gig already been a lively one for Musk, with some members of the cast taking potshots at him on social media.

Amid the hubbub, Musk polled his Twitter followers to spark ideas for SNL sketches. He shared a few of his own, too, including “Irony Man – defeats villains using the power of irony” and “Baby Shark & Shark Tank merge to form Baby Shark Tank.”