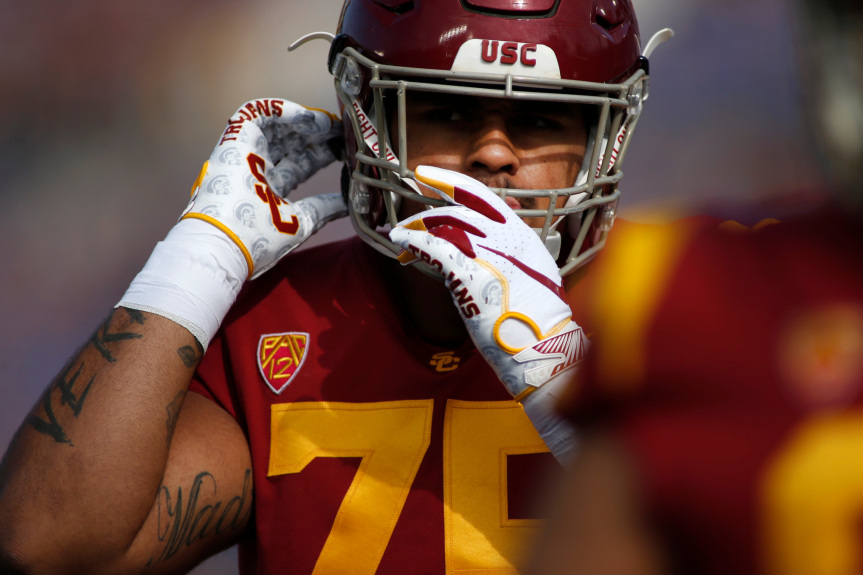 Here’s a look at the USC players who might be selected this week in the NFL draft, which is Thursday to Saturday:

What they’re saying: “We might be in the minority here, but try him at tackle first. Maybe a year from now we’re in a world where offensive linemen who don’t have humpback-whale-flipper arm length can still play outside. This class has a number of prospects in that mold, and Vera-Tucker might be the best of the lot.” — Yahoo! Sport’s Eric Edholm.

What they’re saying: “Despite average foot quickness, St. Brown will vary his press release and displays polish as a route-runner from the slot. He’s unlikely to gain consistent vertical separation but has above-average tracking talent and body control to improve his chances for success.” — NFL.com’s Lance Zierlein.

What they’re saying: “Hufanga also has the ability to put on about 10 more pounds and translate to an off-ball linebacker role at the next level, but will have to improve his tackling for that transition. Hufanga is the type of versatile defender who can stuff the stat sheet for a defense, assuming a multitude of roles.” — Sports Illustrated’s NFL Draft Bible.

What they’re saying: “The 300-pounder opted out of the 2020 season, which seemingly has contributed to his current fourth-round grade and questions about maturity. But when he was last on the field, in the fall of 2019, Tufele was one of the top interior linemen in the country. We believe he has All-Pro potential.” — Mercury News’ Jon Wilner.

What they’re saying: “He will need to add more mass to play nose in the pros but does have the strength and toughness to find reps at the position. Tuipulotu will check all the boxes for personal and football character and could become a solid rotational defender in an even-front scheme.” — NFL.com’s Lance Zierlein.

What they’re saying: “His twitchy feet and well-timed leaps are two very good starting points for defending underneath or down the field. However, he needs to improve his route recognition and instincts in order to do more with his length and make more plays on the football.” — NFL.com’s Lance Zierlein.

What they’re saying: “The ball skills are fun to watch, but he’ll need to improve his play strength and run cleaner routes to hang on as an NFL backup.” — NFL.com’s Lance Zierlein.