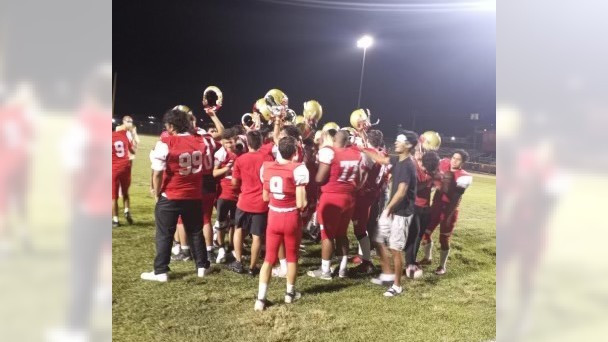 The Toreadors were holding onto a 22-6 lead at the break, sensing that victory was attainable. That sense was new for a program that hadn’t won a game since October 2017.

Kearin challenged his team to score on its first possession of the second half, and they did.

“I think that’s when the kids really felt it,” said Kearin.

Taft beat Van Nuys 43-6 tonight in football. That snaps a 26-game losing streak for the program. The Toreadors’ last win came in a 35-0 victory against Chatsworth on Oct. 27, 2017. @CIFLACS

Kearin, most notably known to be the former head coach at Cal State Northridge and Loyola High, took over in late July. He said slowly the numbers are increasing in the program.

Last week in a loss to Eagle Rock there were 20 players available. Against Van Nuys he dressed 28 – one being a girl, Kimberly Zenteno, a senior wideout. Kearin hopes to get closer to 40 in the next couple weeks as players continue to come out, get healthy and eligible.

Kearin wouldn’t take all the credit, however, he made sure to give kudos to previous coach Aron Gideon. Gideon created a program the athletes could be proud of since his hiring in November 2019. Amid the pandemic, Gideon created a two-story football center that includes a team meeting room, coaches offices, locker room, and re-designed weight room with new equipment.

“He really built something that made these kids do it for each other,” said Kearin. “He laid the ground work.”