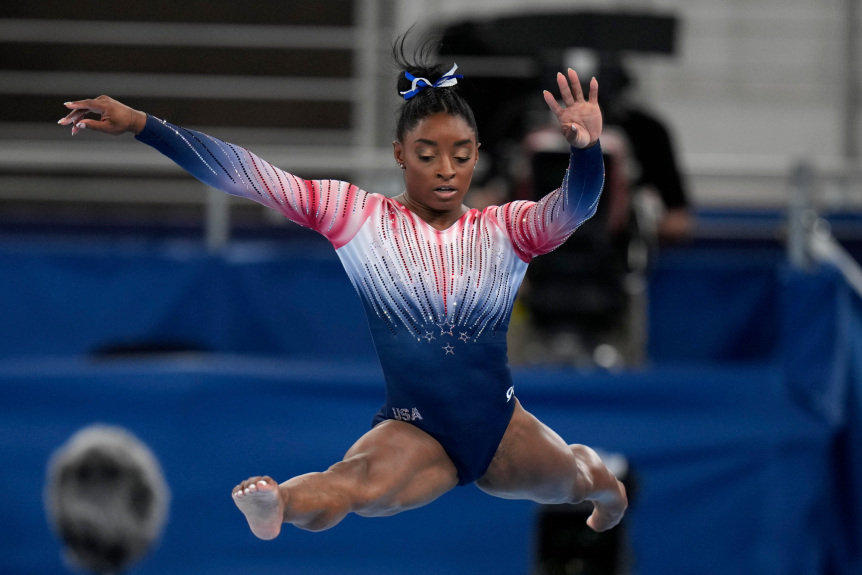 The wait seemed interminable as Simone Biles and her coach, Cecile Landi, stood on the edge of competition area at the Ariake Gymnastics Center early Tuesday evening, awaiting clearance from the judges to begin her balance beam routine on the final night of gymnastics competition.

Landi put her right arm around Biles and squeezed, trying to lighten the moment.

And then Biles was alone, turning to face the beam and a moment for which she and the world had waited a week.

Biles, seven days after she stunned these Olympics by withdrawing in the middle of the team finals, returned to the Games she has been the face of, earning a bronze medal on the beam with a solid, if safe, routine, once again sticking the landing at the end of another barrier-shattering week.

China’s Guan Chenchen, competing last, won the gold medal with a 14.633 score, followed by teammate Tang Xijing (14.233) and Biles (14.00), the event’s determining factor being the American’s last-minute decision to downgrade her dismount for safety reasons.

It wasn’t the Hollywood ending her millions of fans – or NBC – might have wanted, but as Biles reminded us in Tokyo, life is complicated.

“It’s been a very long week, a very long five years,” Biles said. “I didn’t expect to medal today, I just wanted to go out and do it for me, and that’s what I did.

“Just to have another opportunity to compete at the Olympics meant the world to me.”

Biles’ spatial awareness issues, referred to by gymnasts as “the twisties,” aggravated by stress that led her to pull out of the team competition, also kept her out of the individual all-around, vault, uneven bars and floor exercise events. But even restricted to the stands, Biles continued to overshadow her sport and these Games.

Biles’ eight-year reign as the world’s premier gymnast has been defined by skills that defied the imagination. In Tokyo, she again went to a place few dare to go.

She claimed her sixth and seventh Olympic medals here, but above all Biles emerged in Tokyo as the ultimate champion in the MeToo era; the athlete who has stood atop the Olympic medal podium four times, the top step at the World Championships, using her global platform to raise awareness for mental health issues.

“To bring the topic of mental health, I think should be talked about a lot more, especially with athletes,” Biles said Tuesday night. “I know some of us are going through the same things and we’ve always told to push through it.”

Instead, Biles pushed back just as she has against the sexual abuse of young athletes, another issue in which she has been at the forefront.

Biles’ withdrawal came with the Larry Nassar sex abuse scandal still looming over the sport and the Olympic movement.

Biles is a Nassar survivor and has been the highest-profile and one of the most vocal critics of USA Gymnastics and the necessity to prioritize athlete safety over medals and corporate sponsorships and to fix the culture of abuse within the sport that enabled Nassar, the former Olympic and national team doctor, to sexually abuse more than 500 women under the guise of medical treatment.

“It’s great that she is speaking out about these issues,” said Sweden’s Mondo Duplantis, the world-record holder in the pole vault. “It can be tough as an athlete and it’s good that the issues are being raised now.”

In doing so, Biles forced a national conversation on mental health.

“I think just recognizing that it’s so hard and the mental aspect is such a big thing and having the confidence to draw the line and say, ‘You know, I need to step back here and take some time for myself to center myself,’” U.S. beach volleyball player April Ross said. “I think that’s really empowering and that’s something that youths should feel like they can do too, so I think what she did will really impact the future generation.”

But speaking up came with a price.

With Jamaican sprinter Usain Bolt and American swimmer Michael Phelps retiring after the 2016 Games in Rio de Janeiro, Biles became the face of the Olympic Games.

“I live in the United States and anything that came on the TV, NBC or commercials about the Olympics was Simone Biles,” golfer Rory McIlroy said. “I mean it was the Simone Biles Olympics, right. To have the weight of what 300 whatever million (people in the USA). So, the weight on her shoulders is massive.”

Said Rebeca Andrade of Brazil, who succeeded Biles as Olympic vault champion, “People need to understand that athletes are no robots, but humans. The decision (to pull out) she made was the wisest thing to do and it had nothing to do with others.”

Not everyone, however, understood.

With her withdrawal from the team event, Biles became a high profile-target in the latest American culture war. She was vilified as a quitter, selfish and unpatriotic. At least one former top USA Gymnastics official gloated about her demise on social media.

“I feel like athletes kind of suppress their emotions and how they’re feeling,” Biles said. “At the end of the day, we’re not just entertainment, we’re humans. I think people forget that. They have no idea what’s going on behind the scenes. They just judge from our social media, so whenever they say those hurtful things, it’s like you guys have no idea. I got a lot of great comments, a lot of outpouring support and love, but I also got a lot of bad stuff.

In the days and weeks leading up to Tokyo, that weight became overwhelming.

“One day at practice only did beam and before bars I had the biggest mental breakdown, I could not breathe,” she recalled. “I was just like, ‘Not today, I just need to go home.’”

The stress contributed to Biles developing the twisties, the spatial awareness issue that afflicted gymnasts experience when they twist while airborne.

“I’ve had the twisties before,” she said, “but it’s never come out on a stage this big.”

“If you struggle with disorientation in the air,” Italian gymnast Vanessa Ferrari said, “it can be very scary. I feel very sorry for her that she struggles with it, as she is such a great gymnast.”

The problems continued to in Tokyo. Biles couldn’t match her usual high standards in the team qualifying round, Russia finishing ahead of the U.S., an overwhelming favorite to win a third consecutive Olympic team gold.

After the prelims, “everyone was freaking out that Russians ahead and talking about what they need to do,” Biles said of her U.S. teammates. At training the next day, she struggled on bars and only “OK” on the beam and tumbling in the floor exercise.

“That’s when the wires just snapped,” she said. “Things were not connecting, and I don’t know what went wrong. People say it’s stress related but I can’t tell you because I felt fine.”

She continued to struggle the morning of the team final.

“In the back gym, coming in today, it was like fighting all those demons, ‘I have to put my pride aside, I have to do it for the team,’” Biles said on the night of her withdrawal from the team competition, referring to the Olympic practice gym. “At the end of the day, I have to do what’s right for me and focus on my mental health, and not jeopardize my health and well-being. …

“I just don’t trust myself as much as I used to. I don’t know if it’s age. I’m a little bit more nervous when I do gymnastics. I feel like I’m also not having as much fun, and I know that this Olympic Games,” she continued, starting to weep, “I wanted it to be for myself.

“I was still doing it for other people, so it hurts my heart that doing what I love has been kind of taken away from me to please other people.”

Biles had planned to do a Yurchenko 2½ vault on the opening rotation of the team competition final, but only managed 1½ rotations before stumbling on the landing. She received a 13.766 score, well below her usual marks in an event in which she was the reigning Olympic champion and a two-time World Championships gold medalist.

“I did not choose to do a one-and-a-half,” Biles said laughing. “I tried to do a two-and-a-half, and that just was not clicking. It’s very uncharacteristic of me, and it just sucks that it happened here at the Olympic Games. With the year that it’s been, I’m really not surprised how it played out.

“So it definitely wasn’t my best work.”

Returning to the sideline, Biles informed her coaches and teammates she was withdrawing.

“I kind of felt embarrassed with myself, especially when we went to the village and everybody coming up to me and saying how much I did for them and how much I meant for them,” Biles said. “I was crying in the Olympic store because I wasn’t expecting that.”

The scrutiny of Biles wasn’t just in the media. She was medically evaluated daily by a doctor from FIG, the sport’s international governing body, and met with a Team USA sports psychologists twice a day. Because of her inability to twist safely in the air, the all around, vault, bars and floor were out.

“It wasn’t easy pulling out of all those competitions,” she said. “People just thought it was easy, but I physically and mentally was not in the right head space. I didn’t want to jeopardize my health and my safety, because at the end of the day it’s not worth it. My mental and physical health is above all medals that I could ever win.

“For the other events it was not safe for me to do because I could not do the skills with out jeopardizing my health and safety.”

So she continued to lead the cheers for teammates from the stands.

“Being the girls’ biggest cheerleader wasn’t where I wanted to be coming into these Olympics, especially after qualifying for five,” she said. “But I physically and mentally knew I couldn’t do it. I had to pull out.”

And she continued train on the beam. Monday night, she was finally cleared to compete.

“Almost missed the deadline,” Biles said referring to the time she needed to declare to compete in the beam.

“To be cleared to do beam, which I didn’t think I was going to be, just meant the world to get back out there. I wasn’t expecting to walk away with a medal. I was just going out there and doing this for me, and whatever happens, happens.”

As a concession to the twisties, she and Landi decided downgrade the dismount, opting for an exit “I haven’t done since I was 13 or 12.”

“It sucks that I had to downgrade my dismount, but it was best for myself,” she said.

“The pressure was there, but I was doing it more for myself and I was excited to compete at the Olympic Games, because that’s what I planned on doing coming in,” Biles continued. “To have everything change in a whirlwind was so crazy, it’s been a long week. It’s nice to end on a high.”

The question hanging over the end of the Olympic gymnastics competition was whether these were her last Games. In the past, Biles has hinted at competing as an individual event specialist in Paris in 2024. Landi is French.

“Paris is definitely not in my mind frame,” she said Monday, “because I think there are so many things I have work on myself first.”