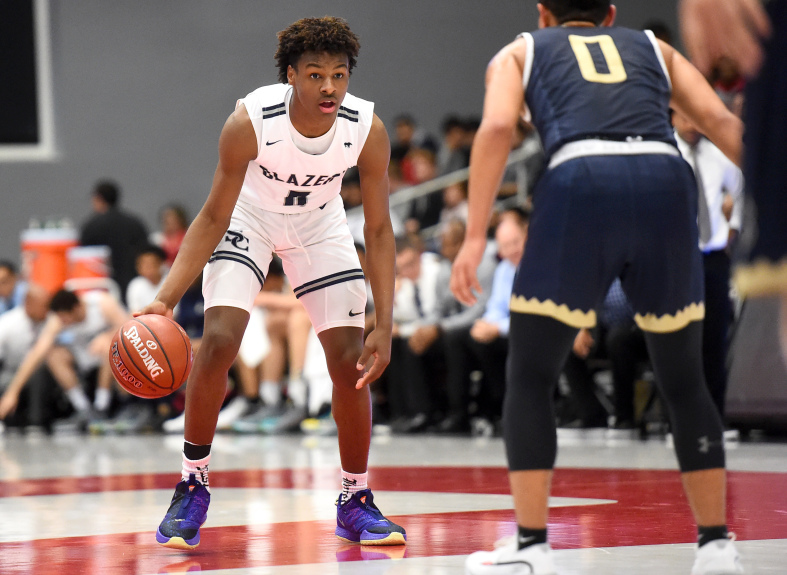 The Sierra Canyon boys basketball team will be in Phoenix, Ariz. Thursday night to compete against Coronado High in the GEICO ESPN High School Basketball Showcase on ESPN2. The Trailblazers will be competing as a travel team “CBC” (California Basketball Club) and Coronado, a school in Nevada, will be playing as “Air Nado”.

The event will have no fans. Only family members of players will be allowed to attend, which makes it likely LeBron James will be there to watch son Bronny James.

The matchup between Sierra Canyon guard Amari Bailey – the No. 3-ranked junior in the country, according to ESPN – and Coronado’s Jaden Hardy (No. 4-rated senior) will be the meat and potatoes of the event. Neither are committed, but both have their bevy of blue-blood colleges to choose from.

Bronny, who’s grown to be around 6-foot-3 since last season, will be making his sophomore debut along with new transfer guard Chance Westry from Pennsylvania. Westry is presumably meant to replace the wing talent of recent graduates Ziaire Williams (now at Stanford) and Brandon Boston Jr. (Kentucky) – both were McDonald All-American selectees.

Sierra Canyon is not the first Southern California high school program to compete in a national event as a travel team this fall. Mater Dei played as “Big Red” in the GEICO Top Flight Invite on Oct. 25 in Gilbert, Ariz. Due to COVID-19, the CIF has extended “summer rules”, which allows programs to compete in games, but because of current local health guidelines competition is restricted, especially indoors.

Competing as a club team – though it’s apparent the roster duplicates that of the respective high school team – seems to be the loophole programs are using to avoid liability from the school, and even potential consequences from powers that be for violating any potential health guidelines while competing.

In short, playing as a club team gets schools off the hook. These games are not CIF sanctioned or even “school” events.