Rams turn to Cooper Kupp to pull out win over Seahawks 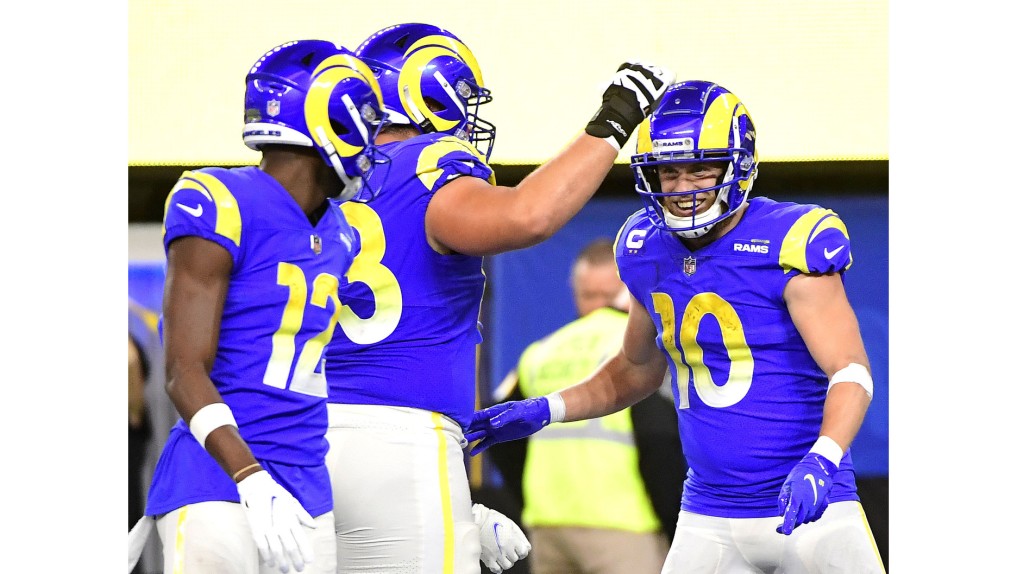 After the longest, strangest week of their season, the Rams took the shortest, straightest way to victory Tuesday night at SoFi Stadium.

They let Matthew Stafford and Cooper Kupp win a game for them.

The defense kept them in it. The ground game kept them moving. But when the Rams were tied with the Seattle Seahawks in the fourth quarter and desperate, they turned to what’s been working all season.

“There’s certain times in a game when you feel like you have to make a play,” Stafford said. “I trusted Cooper to get there.”

Kupp’s 29-yard catch and run for a touchdown with Stafford’s perfectly lofted pass on a first-down play with 11 minutes to go in the game broke a tie and sent the Rams to a 20-10 victory.

They’d waited two extra days to play the game, which was postponed because of the Rams’ COVID-19 outbreak.

Waiting 3½ quarters to win seemed to only make the win more gratifying.

“It makes it that much sweeter when you see guys just stay connected, stay together,” Rams coach Sean McVay said. “Guys didn’t blink. They didn’t flinch.”

The Rams’ third win in a row improved their record to 10-4, tied with the Arizona Cardinals atop the NFC West, although Arizona is still ahead on tiebreakers.

There were other heroes. The Rams’ defense stopped the Seahawks (5-9) on downs at midfield with 3:21 to play. Matt Gay’s second field goal of the night, his 20th successful kick in a row, added insurance. Sony Michel’s fourth-down running capped his day of 92 yards on the ground and 23 in the air.

But in many ways, it was, yet again, Stafford’s and Kupp’s night.

A day after he was named to his first Pro Bowl, Kupp caught nine passes for 136 yards and two touchdowns, giving him 122 receptions this season to break Isaac Bruce’s 26-year-old franchise record of 119.

Kupp became the first NFL receiver in the Super Bowl era to gain 90 yards or more in 10 consecutive games, breaking a record he had shared with Michael Irvin and now-teammate Odell Beckham Jr.

True to form, Kupp steered praise toward the pass in discussing the timing route that created the decisive touchdown.

“Matthew Stafford is a very good football player,” Kupp said. “That’s my analysis of that touchdown.”

Stafford, who completed 21 of 29 passes for 244 yards, reached a milestone of his own, becoming the fastest quarterback to reach 50,000 career yards, doing it in his 182nd game.

The Rams will end up with a bunch of Pro Bowlers this season by the time the rest of the selections are announced this week, but that didn’t give them any privileges Tuesday.

The Seahawks, seven-point underdogs, were looking confident when they went into halftime tied even as the Rams were out-gaining them 153 yards to 79, on the way to out-gaining them 332 to 214 for the game.

The Rams needed a running-into-the-punter penalty on their first drive to put them in position for Gay to kick a 55-yard field goal.

Then they squandered three trips inside the Seattle 40-yard line. From the 32, Stafford threw his first interception in three weeks on an underthrown deep ball to Kupp that was picked off by Quandre Diggs. From the 31, Stafford held the ball too long and was sacked to force a punt. Again from the 32, McVay decided to go for it on fourth-and-2, and a pass to Kupp was broken up.

After that decision by the Rams to pass up a field-goal attempt, the Seahawks went 59 yards and got a 39-yarder from Jason Myers with 10 seconds to go in the half.

But the Rams’ defense was on the job. Sacks by Aaron Donald (giving him 10 in his eighth Pro Bowl season) and Von Miller (his first with the Rams) ended the Seahawks’ first two possessions. Jalen Ramsey covered D.K. Metcalf and a third-down pass fell to the turf.

But the defense opened the second half by giving up a 75-yard, 11-play drive, DeeJay Dallas’ 8-yard push through a gang of Rams tacklers putting Seattle at the 4 and Dallas’ run over Leonard Floyd and Taylor Rapp putting it in the end zone.

Now they had an on-the-field challenge following the COVID-19 challenges of the past week.

At one point they had 29 players, including eight regular starters, on the NFL’s COVID-19 reserve list. Those numbers were down to 16 and three by Tuesday. Tight end Tyler Higbee, right tackle Rob Havenstein and safety Jordan Fuller were the starters who had failed to submit the negative tests required by a noon deadline to be activated.

With top offensive line backup Joe Noteboom also on the COVID list, Bobby Evans started in Havenstein’s place. Center Brian Allen returned after missing most of two games with a knee injury. Stafford was sacked four times, but the line was solid in the running game.

Missing Fuller, their defensive signal-caller, the Rams turned to rookie Ernest Jones for that important duty and he did that and led the team with 11 tackles and a key late pass breakup.

As they had in beating the Cardinals last week with five players on the COVID list, the Rams leaned on backups and asked their leaders to take it up a notch.

Tuesday, when they needed it, that was Kupp and Stafford.

“It’s a whole lot of trust,” Stafford said of what made the decisive play work. “I had to cut it loose early, and cut it loose to a spot that I think only he’s going to be able to get to.

“It turned out to be a good spot.”

With this touchdown catch, @CooperKupp passes @IsaacBruce80 for the most receptions in a season in @RamsNFL history!

Cooper Kupp down there somewhere. #RamsHouse