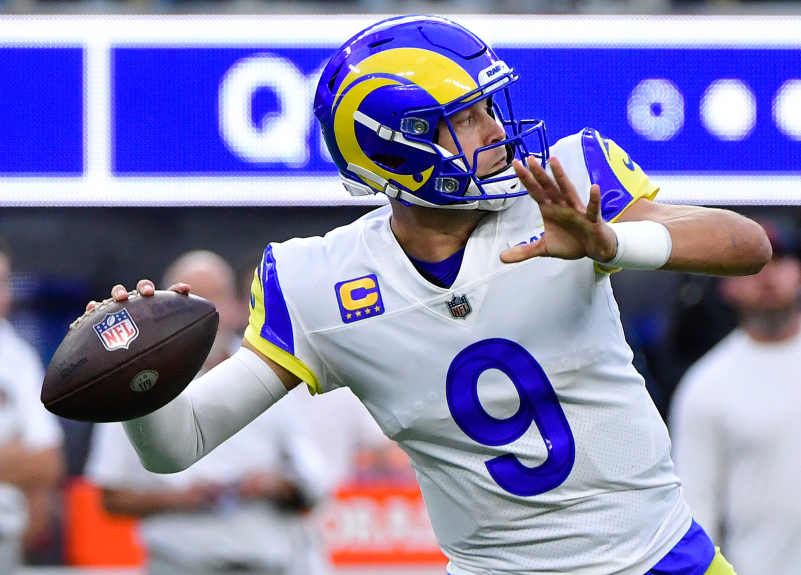 The Rams’ toughest opponent Sunday night might not have been the Chicago Bears but the high expectations of SoFi Stadium’s first regular-season crowd.

Matthew Stafford’s arrival in a trade last winter had fans picturing the Rams riding an explosive passing game to a home-field Super Bowl next February.

Could they encourage such dreams?

Indeed they could, and without delay. Stafford connected with Van Jefferson for a 67-yard touchdown pass before much of the crowd of 70,445 was seated. Then he hit Cooper Kupp for a 56-yard touchdown before everybody was back from halftime.

The Rams handled expectations and the Bears in a 34-14 victory that was their fifth opening-game win in Sean McVay’s five years as coach.

“It was exactly what we wanted,” McVay said.

Stafford finished 20 for 26 for 321 yards, three touchdowns and no interceptions, good for a 156.1 passer rating, a number that Jared Goff matched only once.

“Getting to a new place, and being able to come out Week 1, night 1, and get a win and play the way we did, feels good,” said Stafford, wearing a sweater with giant yellow smiling-face emoji. “Lot of work to be done, but definitely a good start.”

“I think that’s when we’re going to be at our best,” Stafford said, “when everybody gets the ball.”

McVay had been trying to remind people that Jackson, the wide receiver signed last winter to add speed to the passing game, wouldn’t be the team’s only deep threat.

McVay demonstrated that right away when, on Stafford’s third snap with the Rams, he called for Stafford to fake a handoff to Henderson, roll to the left and heave the ball back to the right to Jefferson.

Jefferson brought the ball in to his facemask at the 20 yard line, tumbled to the turf at the 15 but wasn’t touched by a Chicago player and got up and outran Jaylon Johnson to the end zone.

The 67-yard catch-and-run for a touchdown was the Rams’ longest pass play since a 70-yard touchdown from Goff to Kupp against the Minnesota Vikings in 2018.

Stafford strutted down the field to celebrate with Jefferson, as Rams cornerback Jalen Ramsey joined in.

“That’s a debut that probably should go down in history,” Ramsey said of Stafford’s performance.

In another mark of a new year, the quarterback and the offense took the pressure off the defense instead of the other way around.

But big plays by Ramsey and the Rams’ defense kept frustrating the Bears.

After the Bears used a long return of the opening kickoff and a long run by David Montgomery to get inside the Rams’ 10, a pass by Andy Dalton was tipped by linebacker Kenny Young and intercepted by cornerback David Long in the end zone.

With the Bears across the 50 again on their second possession and going for it on fourth and 4, Ramsey jarred loose a pass to Allen Robinson.

Again, late in the first quarter, the Bears were in Rams territory and facing fourth and 4. Then outside linebacker Justin Hollins forced Dalton to fumble and Young recovered at the L.A. 42. Stafford to Higbee for 17 yards started a drive that stalled but resulted in Matt Gay’s second field goal and a 13-0 lead.

The Bears broke through before halftime to make it 13-7.

But four plays into the second half, Stafford threw long to Kupp, who’d outrun the Bears defense. Kupp caught it just outside the 10 and went in untouched.

Stafford was touched, by defensive tackle Akiem Hicks, who drew a roughing-the-passer penalty. Stafford got up from the hit to see Kupp in the end zone. He sprinted toward the sideline with his left index finger in the air.

“I kind of rolled over and tried to get up as fast as I could to see if it was a good one,” Stafford said. “I saw him trotting in the end zone. I figured it was in a good spot.”

Stafford’s last touchdown pass came on a two-yard play to Woods at the back of the end zone with 3:17 to play.

The pass to Jefferson is the one that will be remembered.

“I think it was a great job by him being able to flip his hips and make an unbelievable throw,” McVay said of Stafford. “He’s gifted. He’s got a great ability to change his arm slot and make all types of throws, short, intermediate or down the field.

“You’re not limited with anything you can do with him in the pass game, and hopefully we’ll continue to build on the options and opportunities we have moving forward.”