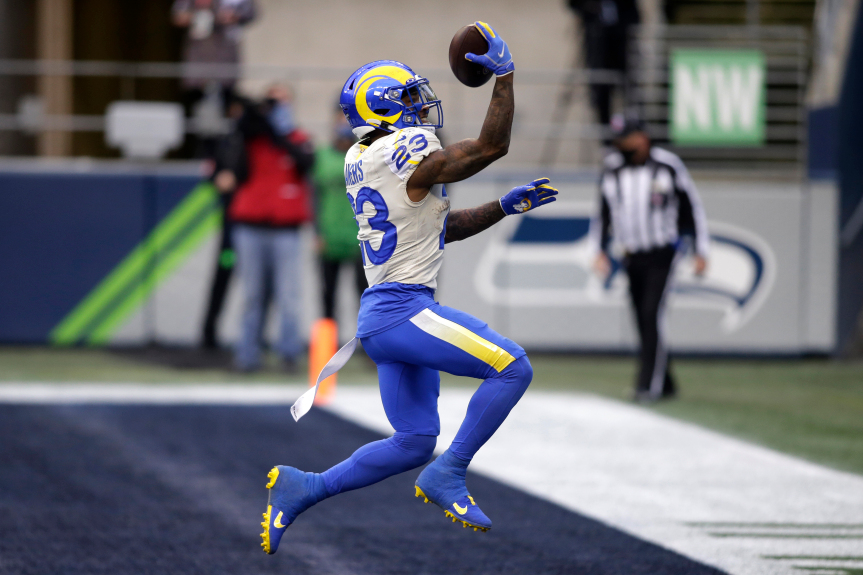 You can break their thumbs. You can bash them in the head. You can bruise their ribs.

One thing you can’t do to the Rams is pry away a game that they have in hand.

John Wolford got hurt, forcing Jared Goff back into action at quarterback. Aaron Donald went out with a rib injury, costing the defense its leader. Cooper Kupp limped up the tunnel late in the game.

The Rams overcame it all, upsetting the Seattle Seahawks 30-20 at fan-free Lumen Field on Saturday to advance to the second round of the NFC playoffs.

Up 20-10 at halftime thanks to their big-play defense, Cam Akers’ running and Goff’s tough performance, the Rams ran their record to 37-0 in games they led at the half in Sean McVay’s four seasons as head coach.

They reversed a loss at Seattle in the second to last game of the regular season, and snapped the Seahawks’ 10-game winning streak in playoff home games.

They’ll know who they play in the playoffs’ division round after seeing how Sunday’s games play out.

“All week we were told how good they are, and how we snuck into the playoffs and were coming to their home place,” Goff said afterward. “Two weeks ago, we saw them smoking cigars and getting all excited about beating us and winning the division.

“We were able to come up here and beat them in their own place. It feels really good.”

Goff, forced into the game 12 days after having surgery to implant pins in the thumb he fractured and dislocated in the last meeting with the Seahawks, sealed the victory with a 15-yard touchdown pass to Robert Woods with 4:46 to play.

The defense held Seattle to a field goal and a late touchdown in the second half despite playing most of it without Donald after the defensive tackle hurt his ribs when he landed on the turf after a hit on quarterback Russell Wilson.

The Rams had no immediate report on Donald’s injury.

“All year long we’ve been a second-half team,” safety John Johnson said. “We didn’t really have the mindset of ‘We’re up.’ It was just kind of ‘Second half, this is where we kick in.’ “

Akers had 131 yards on 28 carries, becoming the first Rams rookie with 100 rushing yards in a playoff game, and added 45 yards receiving. Kupp, back from the COVID-19 list, caught four passes for 78 yards before his injury.

Goff finished with nine completions on 19 attempts for 155 yards and a touchdown — and no turnovers — as the thumb clearly affected his accuracy at times.

“For Jared to even be able to throw the football is pretty impressive,” McVay said. “There were a couple limitations, as you guys saw, and that’s what led to the decision to go with John.”

Wolford was revealed to be the starter less than an hour before kickoff, McVay having made the decision early in the week and succeeded in keeping it within the team.

But chapter two of Wolford’s fairy tale lasted less than two possessions. On a designed run up the middle for two yards on first and 10 from the Seahawks’ 20, Wolford was hit in the head by Seattle safety Jamal Adams’ shoulder. Wolford stayed down and was examined on the field before walking with medical people to the locker room.

After Wolford was shown on TV being taken by ambulance to a hospital with a brace on his neck, a Rams spokesman said he was going “for precautionary measures.”

McVay said Wolford was back at the stadium in time to celebrate with his teammates, and that the injury appeared to be nothing worse than a neck stinger.

“He must be good, because he was in the locker room smiling, looking good,” McVay said.

Goff took over at quarterback and was sacked on his first drop-back, forcing the Rams to settle for the first of three field goals by Matt Gay, a 40-yarder for a 3-0 lead.

Goff was able to hit Cooper Kupp on a deep pass for 45 yards, but the Rams came up short of a touchdown for the eighth straight drive into the red zone over three games, settling for the second field goal to make it 6-3.

The defense had been holding the Seahawks to a field goal, with Donald sacking Russell Wilson twice (giving him 15 against Wilson in their careers) and Leonard Floyd once in the first half.

And now it would make the play of the first 16 minutes.

Cornerback Darious Williams anticipated a Wilson swing pass to DK Metcalf, intercepted it at the Seahawks’ 42 and ran untouched for a touchdown.

The fifth touchdown by the Rams’ defense this season gave them a 13-3 lead.

Wilson and Metcalf struck back quickly, catching the Rams on a blitz by cornerback Troy Hill and connecting on a pass-and-run for 51 yards and a touchdown to draw within 13-10 late in the first half.

Without a 100% healthy quarterback, the Rams wanted their running game to get in step, and Akers was providing what they wanted.

Akers’ five-yard run, untouched up the middle, for a touchdown with less than two minutes left in the first half ended the Rams futility in opponents’ red zones and made it 20-10.

That 75-yard drive featured what McVay called Goff’s best play of the game, which might make it his best play in a few games. From the Rams’ 26, Goff stepped up in the pocket, close to the line of scrimmage, and connected with Akers up the right sideline for a 44-yard gain.

That halftime lead was all the defense needed.

Floyd added a second sack in the last two minutes of the game, giving him seven against Wilson in the teams’ three games this season. And Morgan Fox made it five sacks for the Rams in the game and 16 in the three meetings with Seattle.

Russell finished 11 for 27 for 174 yards, two touchdowns and the interception.

In the playoffs for the third time in McVay’s four seasons, the Rams had plenty to worry about as they moved on, with two quarterbacks, wide receiver Kupp and defensive tackle Donald likely to show up on the injury report in the days ahead.

“The reality is, it’s for everything,” said left tackle Andrew Whitworth, himself just off the injured list to play Saturday on a probably less-than-perfect left knee. “If you can find a way to get out there, if you can push yourself out there and it’s safe, I trust the guys we’ve got on this team. If they’re ready, they’ll be out there. If not, it’s the next guy up.

“It’s ‘Hey, let’s find a way to be the best team we can be in the coming week,’ and whoever we have to do that with, I promise you we’re going to do it.”