Rams look better in second round against Raiders 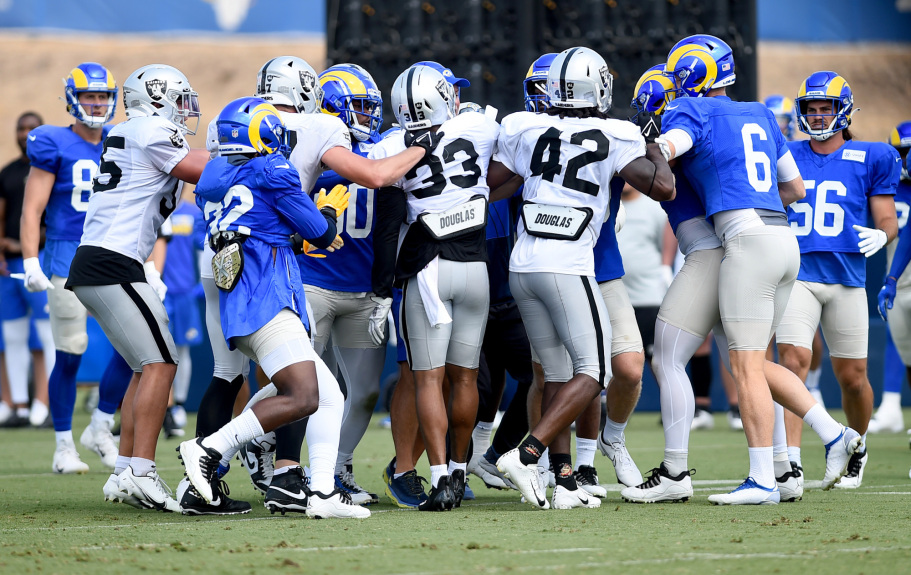 The Rams came away from two days of preseason scrimmages against the Raiders knowing they are ready, at least, to rumble.

The practice sessions ended earlier than scheduled after a series of scuffles Wednesday blew up into a sidelines-clearing skirmish between the teams Thursday at the Rams’ training facility at Cal Lutheran University.

As soon as it quieted down, Raiders coaches ordered Las Vegas players to their buses to head back to the hotel where they’re staying before Saturday night’s preseason game against the Rams at SoFi Stadium.

Rams coach Sean McVay had the Rams finish up practice among themselves, and sounded less upset than he had a day earlier when repeated over-the-line hits got in the way of the practice script.

“We only had a little bit left, and so it felt like the best decision based on the temperature of the situation was to bag the last eight plays in the team period that we had,” McVay said. “The most important thing is everybody was OK, nobody got injured, and we keep moving on. This is as big a deal as we make it.”

“I have no idea what that was, but that’s enough of that crap,” Gruden said. “It’s not good for football, that’s not good for anything. So, that’s the end of that practice session.

“(I)t was two guys in a special teams period, and then it was a lot of trash talking that escalated. It’s just sickening really. It’s just stupidity, but I’m donewith that. That’s just child’s play to me.”

It was unclear what started the climactic brawl, which flared and re-flared twice more during a scrimmage between the Rams punt team and Raiders punt-return team, but Raiders defensive lineman Maxx Crosby seemed to be an instigator.

“It’s football, man,” said Rams defensive tackle Aaron Donald, who had the day off from practice and was an innocent bystander. “Honestly, every joint practice I’ve ever been a part of, there’s always a fight. How it was yesterday, as physical as it was, I figured we would come back and there’d be a lot of BS.”

So the Rams look ready for a fight.

Now, are they ready for football?

As they edged past the midpoint of training camp and practice before their Sept. 12 season opener against the Bears at SoFi Stadium, the Rams’ two All-Pros offered encouraging if not totally reassuring views of how ready the defense is keep its No. 1 league ranking.

“Not yet, if I’m being honest about it,” cornerback Jalen Ramsey said. “We’ve got some time left to get it together.”

“Guys are flying around, guys are making plays. It’s been fun to watch,” Donald said. “As a great defense, that’s what you need. I feel like we’re where we need to be (at this point).”

Both defensive stars are adjusting to changes around them.

Alongside Ramsey in the secondary are replacements for safety and defensive signal caller John Johnson and cornerback Troy Hill, both of whom signed with the Browns. Jordan Fuller is stepping into Johnson’s role. David Long is penciled in for Hill’s.

“I feel like it is (working),” Ramsey said. “It’s a journey, man. Nothing’s going to happen overnight. I think it’s trending up. I think we’ll be right where we need to be when it’s time to be there.”

Next to Donald on the defensive line, for the first time in his seven-plus seasons with the Rams, is A’Shawn Robinson instead of Michael Brockers, who was traded to the Lions.

“I was watching A’Shawn today,” Donald said. “He looks explosive, he looks strong. He was stout on his double-teams. He had some good rushes today. That’s a guy that’s been improving a lot in camp, and in my opinion this was one of his best days.”

As for the offense, McVay again spent most of the scrimmage on the field where it was working, and saw a better performance than the one Wednesday in which quarterback Matthew Stafford threw three interceptions.

“We’ve got the right kind of guys. I love the way they responded,” the coach said. “It was a much more crisp day, for sure, for the offense.”

Ramsey explained a tweet Wednesday that said, “I can’t believe that ‘y’all’ believe half the bs that people say for clicks.”

“I guess some of their (the Raiders’) media thought that Hunter Renfrow had a really good day against me. I’ve watched the film twice, and I still can’t find a play where I was burned multiple times. But, sure,” Ramsey said light-heartedly.

“He had one good catch against me yesterday. For … six yards. It’s cool. I get that mentioning my name, when I’m going against certain receivers, may give them buzz and pump them up some.

“This is no disrespect to Hunter Renfrow. I actually think he’s a pretty good player. I think he has some Cooper Kupp in him. But I didn’t have issues yesterday.