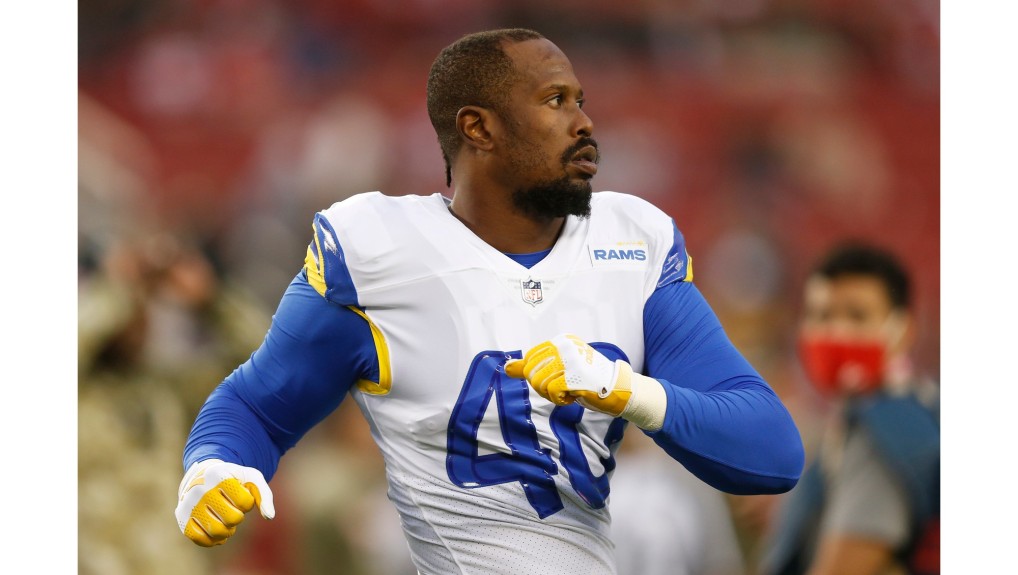 The Rams talked with NFL officials about their options for Sunday’s game against the Seattle Seahawks at SoFi Stadium as COVID-19 cases continued to rip through their roster, a team spokesman said Thursday.

The game seems almost certain to be played, because the league has expressed no inclination to postpone or cancel any of the games involving teams hit with coronavirus outbreaks in the past week.

But much remained uncertain, beginning with who the Rams will – or should – have available to play.

Nine more Rams players were placed on the COVID-19 reserve list on Thursday afternoon, most notably outside linebacker Von Miller.

With those additions, the Rams had 25 players on the list, which is for players who test positive or are found to have had close contact with someone who did.

Among the 25 were seven regular starters and 11 other members of the 53-man roster, plus five players from the practice squad and two players who are on injured reserve.

The Seahawks (5-8) began to have COVID-19 trouble Thursday. They put their leading rusher, Alex Collins, and leading pass receiver, Tyler Lockett, on the reserve list.

But the Rams (9-4) had more players on the list than any other NFL team, even more than Washington and Cleveland, the others hit hardest by the virus.

Record numbers of NFL players are being sidelined, while the virus is also unsettling other professional and college sports amid a winter surge enhanced by the Omicron variant.

It was unclear how the Rams might be affected by the league’s announcement Thursday of a change in its COVID-19 protocols to allow vaccinated players who test positive for the virus to come off the reserve list after one negative test instead of the previous requirement of two negative tests in a 24-hour period.

The league’s intensive protocols for teams with positive tests have disrupted the Rams’ preparation for the Seahawks game.

Their training facility in Thousand Oaks was closed Tuesday and Wednesday. Players were able to show up to take COVID-19 tests on Thursday for the first time in two days. But a jog-through practice scheduled for Thursday afternoon was called off while the team awaited test results, and meetings were held by Zoom for the third day in a row.

The Rams didn’t make coaches or players available to answer reporters’ questions, but a spokesman filled in some details.

The team hasn’t practiced since its 30-23 victory over the Arizona Cardinals on Monday night, and players have been unable to go in for treatment of injuries. Among those are defensive tackle Aaron Donald, who banged a knee in Arizona.

Coach Sean McVay, who has tested negative, might face a decision about whether to play a star like Donald after such an inadequate week of preparation.

Another potential quandary: What if COVID-19 hits more of the offensive line, which has already had right tackle Rob Havenstein and backups Bobby Evans, Alaric Jackson and Tremayne Anchrum go on the list? Should McVay risk playing starting quarterback Matthew Stafford behind weakened blocking? Or should a backup quarterback be used instead?

There is time for some of the Rams on the COVID-19 reserve list to record negative tests before Sunday, especially the first to go on the list, like running back Darrell Henderson (Saturday) and Havenstein and cornerback Dont’e Deayon (Sunday).

Practice squad players can be called up to fill out the 47-man game-day roster. The Rams signed former Washington cornerback Greg Stroman to the practice squad Thursday.

But some position groups have been ravaged.

The secondary has seen cornerback Jalen Ramsey, safety Jordan Fuller and seven others from the 53-man roster or practice squad put on reserve, leaving cornerback Darious Williams and safety Taylor Rapp as the only starters active.

Outside linebackers Miller, Justin Hollins and Ogbonnia Okoronkwo, and inside linebackers Troy Reeder and Christian Rozeboom, were in the latest batch of nine Rams placed on the reserve list, leaving Leonard Floyd and Ernest Jones as the only active starting linebackers.

Most Rams position groups had a starter on the COVID-19 list on Thursday, including wide receiver Odell Beckham Jr.

Starting tight end Tyler Higbee was placed on the list Monday and missed the Cardinals game, only to be found to have received a false positive.

So far this week, Higbee’s reinstatement is the only certainty the Rams have to celebrate.

Fans attending the Rams’ game on Sunday will face tighter COVID-19 testing requirements under new California Department of Public Health guidelines for large public events. Fans age 12 and up must show proof of vaccination, a negative antigen test within 24 hours of the 1:20 p.m. game, or a negative PCR test within 48 hours. Previously it was 72 hours for both kinds of tests. The Rams said testing will be available at SoFi Stadium at fans’ expense.