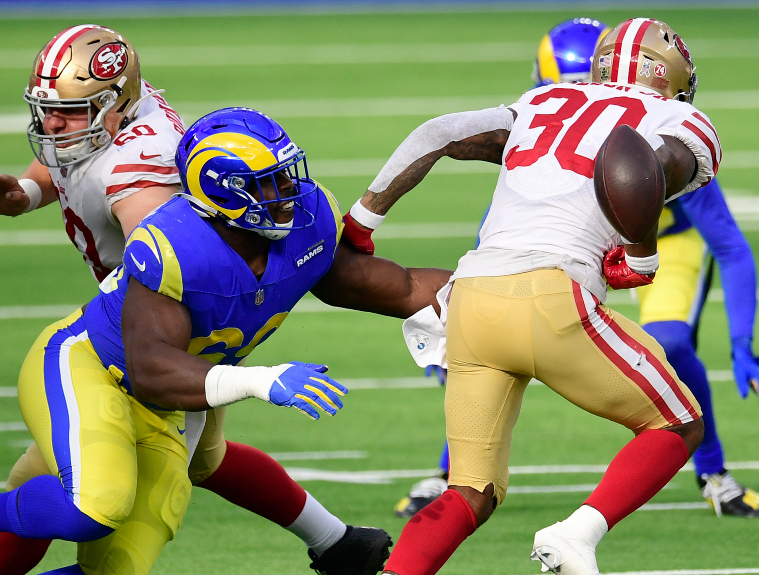 The Rams had depended on their defense to win games over and over this season. The nagging question was whether they could keep living like that all the way to the playoffs.

The blunt answer came Sunday with a 23-20 loss to the San Francisco 49ers at SoFi Stadium that knocked them out of first place in the NFC West and spoiled the momentum they’d gained from beating contenders the past two weeks.

The defense had led a 17-point Rams comeback that put them up by three points early in the fourth quarter.

It was even the defense that scored one of the Rams’ two touchdowns on a terrible day for quarterback Jared Goff and the offense, which had two interceptions and two fumbles.

The Rams fell to 7-4 and dropped into second place in the division behind 7-3 Seattle, pending the result of the Seahawks’ game at Philadelphia on Monday night. The 49ers are 5-6 but have won four straight meetings with the Rams.

“You’re not going to win many games when you take care of the football like that,” Rams coach Sean McVay said. “Give them credit, but in a lot of instances we didn’t do enough to win the football game, I don’t care who you’re playing.”

The Rams trailed 17-3 in the third quarter.

Goff’s second interception and third turnover in a little over a half had been run back 27 yards for a touchdown by Javon Kinlaw early in the third quarter.

The Rams were happy to have the reliable new kicker. But they didn’t want him to be the whole offense.

That’s when the defense woke up the entire team.

Aaron Donald knocked the ball loose from Raheem Mostert, and Troy Hill ran the fumble in from 20 yards out.

On the next series, Donald sacked Nick Mullens on first down, and Troy Reeder stopped two plays for short gains.

After the punt, Cam Akers busted a run for 61 yards to the San Francisco 7, the Rams’ longest gain from scrimmage this season. Akers then went 6 yards and 1 yard into the end zone. The Rams had gone from 14 points down to three points up in 5:13.

They’d been behind since giving up a 3-0 lead early.

Intent on not repeating the sluggish start that sent them them blundering to a 24-16 loss in the teams’ first meeting last month in Santa Clara, the Rams came out and promptly turned the ball over to the 49ers on their first and third drives.

The 49ers gave the ball back immediately both times, matching the Rams’ fumble and interception.

In between, the Rams took a 3-0 lead on a 48-yard field goal by Gay midway through the first quarter after Goff and Robert Woods briefly resumed last week’s big-play connection with a 30-yard gain that put the ball in 49ers territory for the first time.

But San Francisco came right back to go in front 7-3 when Mostert beat Hill to the left edge from 8 yards out after Mullens hit Deebo Samuel for two more of the long gains that have plagued the Rams against the 49ers.

Cooper Kupp, who was thrown to less often than usual Sunday and wound up with only two receptions for 41 yards, said the Rams’ sloppiness early didn’t mean they’d failed in their stated goal of starting with more energy.

The Rams’ third turnover, a Goff fumble at the end of a scramble from the Niners’ 39, with most of a minute to work with, turned into one more gift politely refused by the guests. Gould’s 50-yard field-goal attempt fluttered short and wide right.

As the second half started, it was shaping up as a game the Rams have pulled out before this season, with a big second half by the defense saving the day.

But the offense was going to have to do something, and instead things got worse.

Goff finished with a 52.9 rating, his lowest since the December 2018 loss to Chicago, on 19 completions in 31 attempts for 198 yards, no touchdowns and the two interceptions. He was sacked twice.

“Our defense played great all night, they kept us in it,” Goff said. “Offensively we weren’t doing much early on, especially.

“It starts with me. Just taking care of the ball, eliminate turnovers, and that usually leads to a lot of success, especially for us.

“We’ve got another game next week (at Arizona). Just get after it starting tomorrow. I’ve had to bounce back from various things before, and this is another one of those hurdles.”