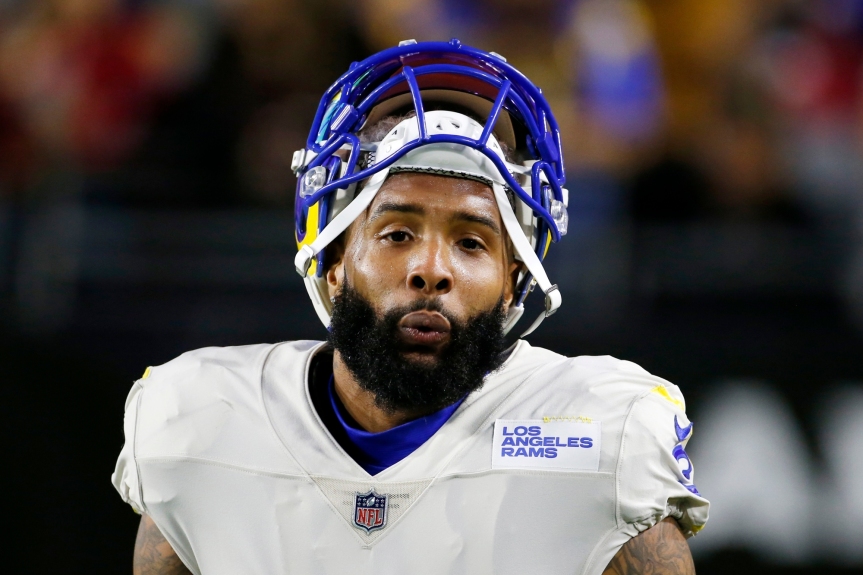 The Rams felt they’d triumphed over adversity as well as one of the best teams in the NFL when they overcame the loss of five players to the COVID-19 reserve list and beat the Arizona Cardinals on Monday night.

It turns out, though, their battle with the coronavirus was just beginning.

Beckham and Fuller were the fifth and sixth Rams starters to go on the COVID-19 list, after cornerback Jalen Ramsey, running back Darrell Henderson, tight end Tyler Higbee and right tackle Rob Havenstein missed the game in Arizona.

Higbee turned out to have received a false positive, and he was returned to the active roster Tuesday.

Under the NFL’s intensive protocols for teams getting positive COVID-19 tests, the Rams’ practice facility in Thousand Oaks was closed through at least Wednesday.

That limited players and coaches to Zoom meetings and kept them off the field as they began preparation for Sunday’s home game against the Seattle Seahawks.

The batch of breakthrough cases among Rams players came amid a league-wide wave of positive tests and an uptick in infections nationwide with the arrival of the Omicron variant.

But it came as a surprise to the Rams, who went the first 13 weeks of the regular season without a first-unit player missing a game because of the NFL’s coronavirus protocols.

“I am very surprised, because you feel like you’re behind it when everybody’s vaccinated and you’re moving in the right direction,” said Coach Sean McVay, who has reported that all but one Rams player is vaccinated.

“And without a doubt, we never have experienced anything close to this magnitude as it pertains to COVID. So this is definitely something that’s been eye-opening and it’s something that (we) have to figure it out.

“Nobody’s going to feel sorry for us. We got to keep it moving. What that looks like is going to be interesting.”

McVay spoke with reporters on Zoom before the Rams announced Tuesday’s batch of COVID-19 reserve-list moves.

Placed on the list between Saturday and Monday were Henderson, Higbee, Havenstein, Ramsey and cornerback Dont’e Deayon.

The COVID-19 reserve list was instituted in 2020 as a way to allow teams to temporarily replace players who test positive for the virus or are found to have had close contact with people who did. A vaccinated player who tests positive must record two negative tests within a 24-hour period to be eligible to come off the list. McVay, respecting privacy, has declined to go into specifics about individual cases.

McVay’s frustration at getting one piece of bad news after another the past few days came out in a joke after he was asked if he had received his own test results.

“I have not gotten my results back yet,” McVay said. “I feel great, though. But that doesn’t really mean anything anymore. All these guys that are popping positives feel outstanding. So we shouldn’t be testing.”

McVay lightheartedly worried aloud that the NFL would fine him for the wisecrack.

The uncertainty about practice schedules and players’ availability this week complicates McVay’s task at what could be a pivotal point in their season.

He’s hoping that what he called “momentum” from a 37-7 victory over the Jacksonville Jaguars and the 30-23 win against the NFC West-leading Cardinals carries over to Sunday when the Rams (9-4) meet the Seahawks (5-8) at SoFi Stadium.

McVay expressed confidence that his players and staff can handle the upheaval.

“How many players are truly affected, and how many guys we have to count on maybe missing (the Seahawks game), is going to be a big part of it,” McVay said. “And that’s where the coaches have to do a great job, and then the players’ job is to be able to respond with that next-man-up mentality and mindset.

“I thought that was on display at an incredible rate last night.”

But it also was a night for backups to shine. Among players who filled in well for sidelined starters were running back Sony Michel (79 yards rushing), tight ends Kendall Blanton (two catches for 29 yards) and Brycen Hopkins; tackle Joe Noteboom, and defensive backs Kareem Orr (four tackles) and Terrell Burgess (one tackle), as well as center Coleman Shelton, starting in place of injured Brian Allen (knee).

But now Hopkins and Burgess are on the COVID-19 reserve list themselves.

“The scary thing about all of this to me is every single person is vaccinated that we’re talking about,” McVay said. “That’s the thing that’s the most concerning about all this, is everybody’s done exactly what they could.

“I trust that these guys are taking the right precautionary measures, and now, whether it’s this new variant or whatever it is, you’re adding a lot of layers to this situation that we thought we were past.

“That’s the thing that I think is the most mind-numbing about it all for me.”

The Rams were favored over the Seahawks by five points Tuesday afternoon. The point spread was seven before the Rams’ COVID-19 reserve list moves were announced. … A day after his birthday, Andrew Whitworth became the first 40-year-old to start at left tackle in the NFL on Monday. McVay said it made Whitworth “one of one.” … In addition to his interception, outside linebacker Leonard Floyd led the Rams in tackles (eight) for the first time. … Rookie linebacker Ernest Jones, who had an interception, is playing in all personnel groupings now. If needed, presumably he could fill in for Jordan Fuller as defensive signal-caller, a role Jones practiced this summer. … Linebacker Justin Hollins played 22% of the defensive snaps on Monday and had two tackles in his first game off injured reserve.