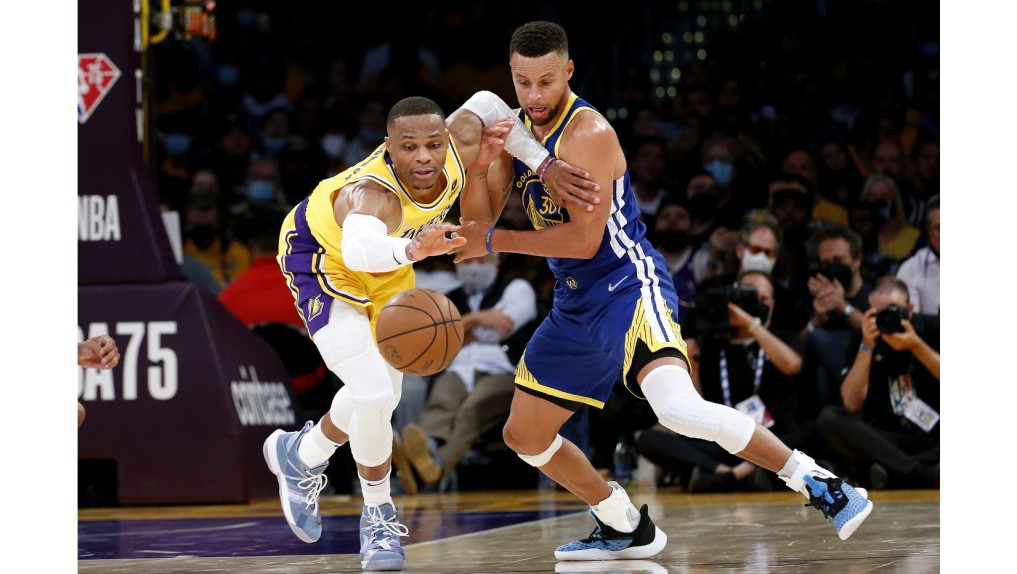 It was just the first night of the Lakers’ season, but forget the slow build – why wait for the drama?

On a pull-out-the-stops kind of evening, there was a fourth-quarter comeback, a player checking in on his first day on the squad, and more than a few fast-breaks and big-time shots.

Unfortunately for the Lakers and their new star trio, they were on the wrong side of two many of the beats of a pulse-quickening regular-season opener, a 121-114 loss to the in-state rival Golden State Warriors.

It wasn’t for lack of a great show by LeBron James and Anthony Davis, the stalwarts of the last two seasons and the anchors of the 2020 championship team. The established duo dropped a combined 67 points in sizzling shooting displays (28 for 49 from the floor), but their new third member Russell Westbrook suffered a dud in his first game for his hometown team.

James was frustrated in the closing minutes as the game got away from them, but he was composed in his buttoned-up black suit afterward, stressing that the Lakers’ road is a long one.

The Lakers were outscored by 23 points in the 35 minutes Westbrook was on the court, which saw him notch eight points (on 4-for-13 shooting), five rebounds, four assists and four turnovers. Golden State managed a 38-29 fourth-quarter edge, led by Steph Curry’s eighth career triple-double (21 points, 10 rebounds, 10 assists) – his first since January of 2016, but well-supported by five other Warriors in double figures and passing that yielded 30 assists on 41 field goals.

All this was achieved with the Warriors missing the third head of their monster: All-Star guard Klay Thompson sat on the bench, still getting in condition for a midseason return to play after a two-year absence.

Both Davis and James said Westbrook was hard on himself after the game in the locker room, and they tried to lift him up. When asked if there were takeaways from his first game with the Lakers, Westbrook didn’t feel like dissecting it much.

“I’ll look at it and see,” he said. “But you know we didn’t win so there may be some stuff, but not much. At least from my perspective.”

The first defeat of the year showed that the Lakers are once again top-heavy – and that Westbrook, still blending in after the blockbuster summer trade that brought him from the Washington Wizards, isn’t yet in that upper class.

Donning his new jersey No. 6 – the digit of his Miami days – and the headband of his youth, James (34 points, 11 rebounds) turned back the clock, nailing his first three shots and pouring in points wherever he wanted. He continued his tradition of rising up for games against the Warriors and one of his top rivals in Curry, who was meek by comparison (5 for 21) struggling for open looks all night.

James’ highlight reel got rolling in the third quarter, when in short succession he tear-dropped a turnaround jumper on Andrew Wiggins, fired a one-handed touch pass to Davis, and cruised in for a breakaway dunk.

After a preseason when Davis underscored many times how excited he was to get back to the game, he showcased his enthusiasm with red-hot shooting touch (15 for 26) on his way to 30 points. With 20 of those points in the first half, Davis emphatically celebrated after big baskets and added 11 rebounds to enforce the physicality the Lakers are seeking to regain this season.

“You want to be dominant every time you touch the floor,” Davis said.

For Westbrook, the transition from preseason to regular season remained rugged. The 32-year-old guard missed his first four shots, only finally rolling in a contested layup with 4½ minutes left in the second quarter. He couldn’t convert a point-blank attempt at the rim when Curry rushed up to meet him in the third quarter, and the frustration boiled into a technical foul that marked his first fine of the season.

But even outside of Westbrook’s continuing struggles, the Lakers were gashed at the positions where injuries have hit them the hardest. They were outscored on bench points 51-26, and reserves Carmelo Anthony and Malik Monk were consistently burned on their defensive assignments.

The Warriors used a 15-5 fourth-quarter surge to take the lead, taking advantage of the Lakers’ wobbly defensive chemistry for long-range bombs and fleet-footed back cuts – the same way they pulverized them during two preseason meetings that the Lakers shrugged off as meaningless exhibitions.

With regular-season stakes on the line, Coach Frank Vogel went for a desperate move that he had said earlier was unlikely: subbing in new pickup Avery Bradley. While the veteran guard had only spent one pregame walkthrough with the team, he played out the final eight minutes of the fourth quarter, nailing a pair of corner 3-pointers while also guarding the very Warriors players he played alongside during preseason training camp.

But the move had limited payoff: Andrew Wiggins hit the dagger 3-pointer with 2:36 left, extending the Warriors’ lead to 12 points.

“Obviously, you gave up a 38-point fourth quarter, so you do that, you’re gonna lose most nights,” Vogel said. “Our defense is just not on a string yet. I thought we did a good job being up on Steph, but the backside was much better in the first half than the second half.”

Though preseason games allowed full attendance, Staples Center came alive for the first time since March 10, 2020, with a full allotment of 18,997 fans. The full house also included a particularly vibrant who’s who: Kevin Hart, Justin Bieber, Usher, Lil’ Wayne, Floyd Mayweather and pop singer Adele flanked by her boyfriend, super-agent Rich Paul. For the first time since well before the onset of the pandemic, one of the most famous and familiar courtside residents was in his assigned spot: Jack Nicholson.

On the court, it just might take the Lakers a little longer to get back where they believe they rightly belong.

“It’s one game. We want to learn from it and get better.” @KingJames on the #Lakers loss, Russell Westbrook’s performance and more. pic.twitter.com/AJZZ8GnEYi

‘We will be fine… We’ve just got to continue to push, continue to get better.” @AntDavis23 (33 PTS, 11 REB) on the #Lakers defensive miscues tonight against the Warriors. pic.twitter.com/0brCBOPz8Z

The ball movement on the break! ✨@Lakers 7-0 run on TNT pic.twitter.com/3PvjKFVOkU

“We didn’t finish quarters well the whole night… We gave up a 38-point fourth quarter so if you do that you’re going to lose most nights.” Frank Vogel with a few takeaways from tonight’s loss. #LakeShow pic.twitter.com/BDQ4QQD3ZH