Lakers’ Russell Westbrook: ‘I’m over the whole situation with what everyone else wants me to do’ 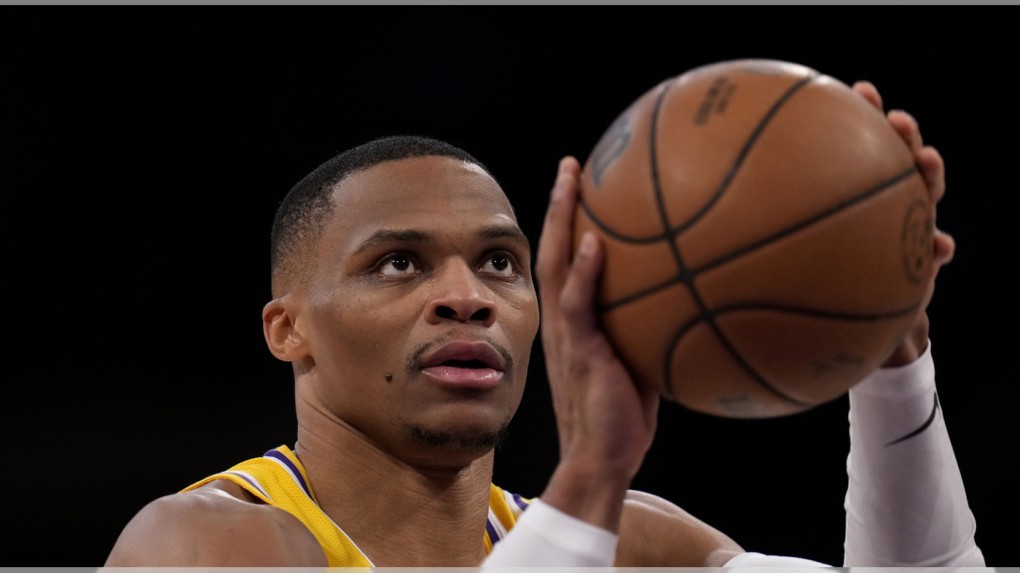 If there ever has been an NBA player with an independent streak, it’s Russell Westbrook.

Sometimes electric, sometimes maddening, Westbrook has never shied from going his own way – which has made him the NBA’s triple-double king and the 2017 MVP. But mired in a five-game losing streak with the 16-18 Lakers, Westbrook has heard a lot of voices chiming in on how he should play.

Characteristically, he’s keeping his own counsel.

“I think people just say it – ‘let Russ be Russ’ – but nobody actually knows what that means but myself,” he said Monday after a team practice. “ And I’m gonna lean on that and make sure I do what I’m supposed to do. And let everything else outside the locker room, whatever that may be, take care of itself.”

As ever, there’s been some good with some bad with Westbrook, now 33 and showing some signs of athletic decline. He’s been the Lakers’ third-leading scorer (19.6 ppg), top assist man (8.1 apg) and second-best rebounder (7.9 rpg) while shooting 48% of his shots at the rim – on par with his stellar regular season run in Houston in 2019-20.

But the struggles are just as obvious: Westbrook is shooting just 45% from the field this season, and he has given up more turnovers (156) than anyone in the NBA. He had a clunker on Christmas, shooting just 4 for 20 from the field and had a dunk attempt in the final seconds clunk off the rim. There may not be another NBA player whose failures are just as spectacular as his success game-to-game.

The scrutiny is magnified by the Lakers’ results lately, in the midst of a season-worst streak and contrasted with steady play by teammate LeBron James (31.6 ppg, 9.8 rpg, 55.8% shooting in the last five games). But Westbrook doubled down on himself, even saying coaches Frank Vogel and David Fizdale are merely secondary authorities on how he should play.

Westbrook’s sense of confidence isn’t without some merit. Just two days before faltering against Brooklyn, he compiled 30 points against San Antonio, albeit in a losing effort. He has changed some of his shot diet to take fewer jumpers and fits more to the Lakers’ defensive scheme than he did at the start of the season.

Fizdale pointed out these factors, coming to his star’s defense. Westbrook is often criticized for leaning on a shaky jumpshot, especially for banks from the wing. But on Saturday, Westbrook only took three jumpers, taking advantage of the Lakers’ smaller lineups to attack the rim – he just didn’t finish.

“As a coach, if I got Russell Westbrook at the rim for layups, I’m living with whatever happens because that’s where you want him,” Fizdale said. “You want him in the paint all night long.”

Perhaps Westbrook’s seeming frustration comes from listening to the noise, as he indicated Monday.

“Honestly, I think I’ve been fine,” he said. “I don’t know what, like, the conversation has been heavily on how I’m playing and what I’m doing, but I think people are expecting me to have (expletive) 25, 15 and 15, which, that is not normal. Everybody has to understand, like, that’s not a normal thing that people do consistently.”

Westbrook has had six triple-doubles this season, adding to his NBA record of 190. But it’s plain to see that he, like the Lakers, would just as soon start adding wins.

Lakers hopeful to have more personnel out of COVID-19 protocols

For the first time in weeks, the Lakers were able to conduct an off-day practice, which Fizdale described as “awesome.” The team was able to incorporate Avery Bradley back into the group after the 31-year-old guard missed four games in protocols and a fifth because he wasn’t ready to be thrown into the mix on Christmas.

The Lakers still have Austin Reaves, Kent Bazemore, Trevor Ariza and Rajon Rondo in protocols – not to mention head coach Frank Vogel. Fizdale is 0-4 since taking the interim reins, and hasn’t hidden that he’s eager to get back to his assistant role under Vogel.

“It’s a matter of just testing now and getting those negative tests in,” he said. “But he’s doing well health-wise. Spirits right. Obviously chomping at the bit to want to get back to and start competing.”

There could be a major development on that front: The CDC reduced recommended isolation times from 10 to 5 days on Monday afternoon, coinciding with an NBA memo that ESPN reported would allow players who test positive for coronavirus to test out of protocols within six days instead of 10.

The Lakers are scheduled to fly to Houston for a back-to-back against the Rockets and Grizzlies on Tuesday and Wednesday. Fizdale didn’t rule out the idea that anyone clearing protocols in the coming days could join them on the road trip, albeit with a rough adjustment period after cooling their heels in protocols.

“There’s a suffering that comes with that because guys have been gone for 10 days,” he said. “They’ve been sick, no legs, we throw them in there and it’s hit or miss. Sometimes they go through tough stretches or like Malik (Monk), come out and play well. So that’s the tough part that you have with bringing them back, but if some guys are healthy and the opportunity is there to get them out there with us, I’m sure that that may be something we look at.”