Lakers cheered as they return to L.A. as newly crowned NBA champs 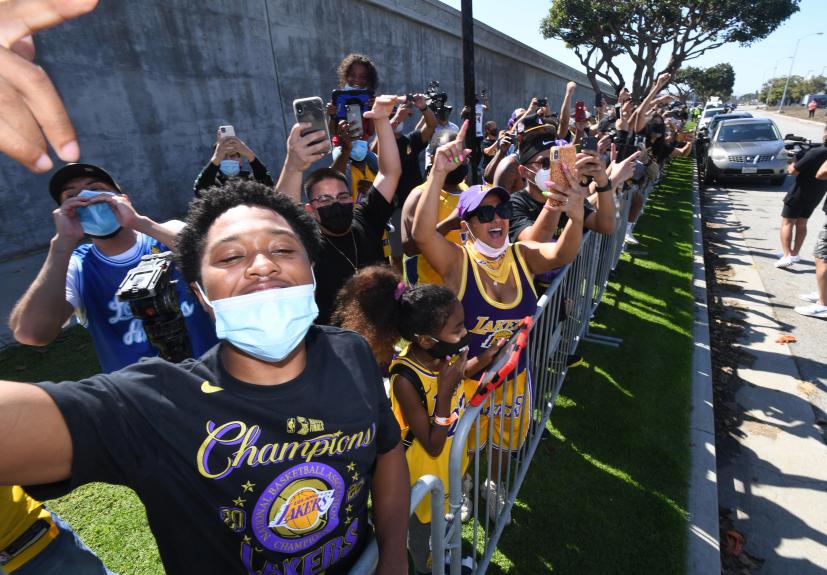 After an unprecedented 95-day deployment into the Florida bubble, the Lakers returned to L.A. on Monday afternoon, and they didn’t come home empty-handed.

They brought the Larry O’Brien NBA championship trophy “back to Los Angeles, where it belongs,” as Jeanie Buss put it Sunday, moments after the Lakers beat the Miami Heat to clinch the franchise’s NBA-record-tying 17th title, making Buss the first woman team owner to win a championship.

Fewer than 24 hours after the Lakers beat the Miami Heat 106-93 in Game 6, the team touched down at LAX, where they were greeted by purple-and-gold-clad fans lining streets nearby, waving and cheering and serving as an official welcome home party.

Several of the Lakers engaged with their supporters, including center JaVale McGee, who was recording the scene while leaning out of the passenger window of a black SUV.

It was just a taste of what a full-blown championship parade would – or will – feel like.

After waiting a decade to celebrate another NBA title, the ongoing coronavirus pandemic means that Lakers fans had to take a raincheck on parading in honor of this season’s squad. In L.A. County, a ban on large gatherings remains in place as a part of the Public Health Department’s “Safer at Home” order that states “large events, such as conferences or events at convention centers, whether public or private, are still not allowed.”

During Sunday’s televised trophy presentation, Buss addressed the team’s fans, telling them that they deserve a party and promising they’ll get one – when it’s safe.

“We have been through a heartbreaking tragedy, with the loss of our beloved Kobe Bryant, and Gianna. Let this trophy serve as a reminder of when we come together, believe in each other, incredible things can happen,” she said. “Laker Nation, when it’s safe, I look forward to celebrating with you.”

A couple thousand people opted not to wait, turning out in downtown for a rowdy celebration near Staples Center, where fans chanted “Ko-be, Ko-be!” The celebratory mood soured in time, and at least 76 people were arrested following confrontations between LAPD officers and a large street crowd that was, in some instances, drunken and destructive – a different scene than the almost entirely peaceful, positive parade and rallies that were held following the team’s 15th and 16th championships in 2009 and 2010.

“It’s a tragedy we weren’t able to play any of these games in Staples Center,” Lakers guard Alex Caruso said after Sunday’s victory, which successfully capped the Lakers’ first playoff appearance in six seasons. “Just because I know how much they want it, how much they’ve been missing it and how much we’ve been waiting for this opportunity to give them the show and the chance to get back there for playoff basketball.

“But I think they’ll take the championship over everything.”

And until everyone can get together again, the members of the Lakers are celebrating a return to real life. Shortly after arriving home, some players took to Instagram stories to document their respective homecomings: Kentavious Caldwell-Pope shared a clip of his kids and Kyle Kuzma posted an image of his pup – everyone happy to welcome home the champs.