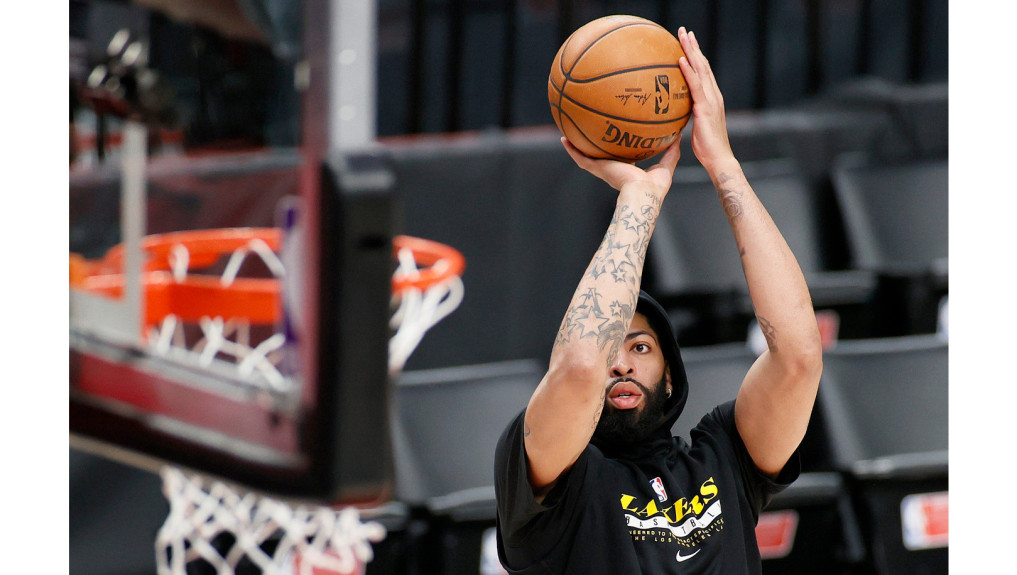 A week ago, the Lakers lived in a different universe – one in which they were confident, cocky and having plenty of fun at the Phoenix Suns’ expense.

The sobering dose of everything that’s come since has left them frustrated, staring down elimination in Game 6 of their first-round playoff series on Thursday night at Staples Center. And nobody represents that frustration better than Anthony Davis, who might not even play with the season on the line.

As much as any member of the seventh-seeded Lakers, Davis suggested in the previous weeks and months that the Lakers would be fine despite their injuries, which resulted in patchwork lineups and dubious chemistry. But on Wednesday after practice, the 28-year-old All-Star big man was as anxious as anyone, still working on his strained left groin to try to get it right so he can try to play Thursday night.

Sitting out a demoralizing 115-85 Game 5 loss that gave the second-seeded Suns a 3-2 edge in the best-of-seven series was difficult to bear.

“It’s the toughest part, knowing that I couldn’t contribute,” he said. “My body just wouldn’t allow me to. As far as tomorrow, I obviously want to.”

“Hopefully all the rehab and treatment that I’m doing pays off and the doctors clear me to go. That’s what we want. So, getting more treatment tonight, tomorrow and kind of talk to the doctors before the game – before and after I shoot – and hopefully everything comes back good where they clear me. That’s what we’re hoping for.”

Davis’ injury is a result of already trying to play through pain once in this series. In a Game 3 win that was widely seen as an emphatic return to form for the Lakers at large, Davis hyperextended his left knee. He played in Game 4, saying there was “no chance” he’d miss it, but a baseline drive late in the second quarter compounded his condition: “Just went up to try to lay the ball up and as soon as I went up, I just felt it from my knee just shoot up into my groin.”

Davis said medical staffers have explained to him that the interconnected nature of the muscles and joints in the leg make adjacent areas susceptible to injury. Before Game 5, he tried to loosen up by doing some spot shooting, but he said he felt uncomfortable pushing off. After applying a heat pack for 20 minutes, he went out on the court again but gave up with roughly an hour to go before tip-off.

The forecast for Game 6 does not appear promising. Coach Frank Vogel said Davis remains a game-time decision, but that it would be up to the medical team, especially if Davis remains at further risk. While it wasn’t a medical diagnosis, LeBron James said following Game 5 that he was preparing for Game 6 as if Davis would not be available.

The Lakers also could be without starting guard Kentavious Caldwell-Pope again. The veteran wing defender played just 15 minutes, his left knee injury (from his own hyperextension) tightening up throughout the course of the evening. Vogel said Caldwell-Pope wasn’t nearly as lithe as he usually is, sprinting down the court both ways.

“Hopefully we can have some of these guys back,” Vogel said. “And if not, the lack of cohesiveness has been a challenge for us all year. But it’s just the hand that we’re dealt. And we’re just trying to make the best of it. And that’s going to be the mindset going forward in Game 6.”

The Lakers are hoping to avoid becoming the sixth defending champion in NBA history to be ousted from the playoffs in the first round.

In Game 5, the Lakers all but folded that hand, letting go of the rope especially during the second quarter when the Suns outscored them 32-10. Role players were not particularly up to the challenge of trying to win a game without Davis, and James had a somewhat underwhelming start to the game, too. Vogel acknowledged the Lakers struggled at the outset to fire away when they got open shots. The Lakers’ 3-point shooting in the postseason (30.2%) is the second-worst of any of the 16 teams, just ahead of the Washington Wizards.

A lack of fight was the most disturbing part to most of the players who spoke to the media afterward, like Markieff Morris, who is typically ready to scrap: “I said when I came into the locker room, (the Suns were) just disrespecting us. They’re punching us and we ain’t punching back. That’s how I felt all night.”

Vogel, who said he brought the team together Wednesday for a “constructive film session,” declined to discuss specific lineup or rotation changes that might be in the works, but anything seems on the table. One day after Marc Gasol replaced him to start the second half, center Andre Drummond sent out a cryptic tweet shortly around the time of the Lakers’ practice.

Said Vogel of what the Lakers might change: “Considering everything, honestly.”

The Lakers have been slow to summon urgency at critical moments this season. They lost back-to-back games against Sacramento and Toronto (two teams that missed the playoffs) when James first returned from the ankle injury that cost him more than a month; they lost crucial tiebreaker games in Dallas and Portland; they fell behind by double digits against Golden State in the play-in round before winning on James’ go-ahead 3-pointer in the final minute.

Game 6 will test the historic strength of James in the first round: He’s a perfect 14-0 in every other first-round series he’s played in his career, and only once has he faced elimination in Round 1, winning a Game 7 against the Indiana Pacers in 2018. He’s 14-10 in elimination games overall.

Davis, who averaged 34 points and 10.5 rebounds in the Lakers’ two wins in the series, might be the piece that swings it back in their favor – or he might be a spectator again. Either way, he has a good idea of what needs to change to keep the season going.

“We gotta play with a sense of desperation,” he said. “Toughness. Heart. That’s it. Guys can’t shy away from the moment.”