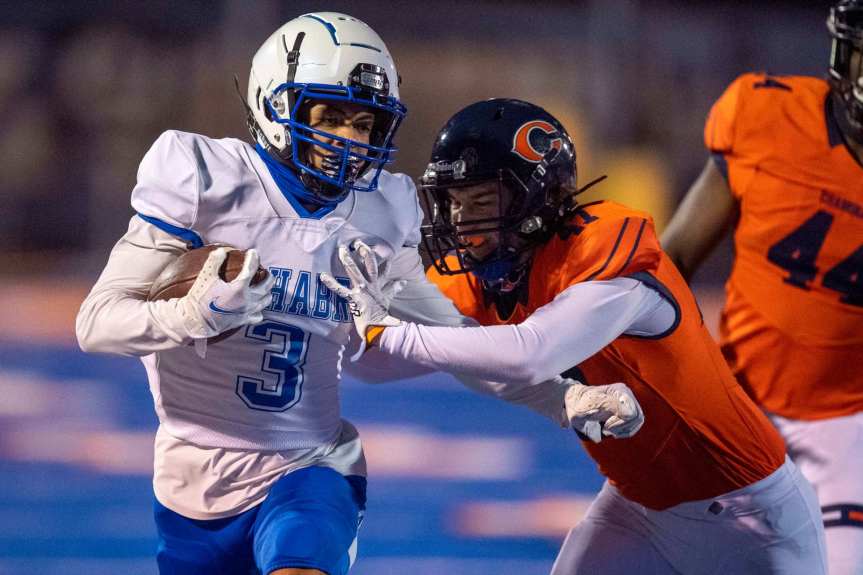 It had been 477 days since La Habra High played a football game.

The Highlanders were preparing to play Mission Viejo on Friday night in a highly anticipated contest to welcome high school football back to California, but Mission Viejo had to opt out due to a positive COVID-19 test in its program.

For a moment, the La Habra players were going to have to wait another seven days to play a game. Then Chaminade raised its proverbial hand and agreed to an impromptu game. La Habra agreed.

The agreement was made official late Friday morning, less than eight hours ahead of kickoff. Mazzotta’s way of telling his players was very fitting for the virtual world that high school students have lived in since March 2020.

“I sent the message to them via Google Classroom,” Mazzotta said laughing.

Chaminade coach Ed Croson had his own way of explaining how it happened.

“This is a classic, ‘Hey, my street vs. your street … meet you in the parking lot in an hour’ kind of thing,’” he said.

La Habra topped Chaminade 35-16, but the score was secondary. Everyone felt it. Even when the scoreboard looked bad, parents were smiling, laughing – some echoing trash talk from the stands. It was a sliver of normalcy. High school football was back.

The Highlanders had to endure heavy traffic en route to West Hills and that delayed the 6 p.m. start, but that was a mere blip compared to the task at hand. No scouting, no film to break down the opponent. Just play.

“It’s all about getting the kids a chance to play,” Mazzotta said. “They’ve been dying to play football. It doesn’t matter, we’ll play anybody. (Chaminade) is a great program and has proven it for years. Coach (Ed) Croson called us and we thought it was fantastic, told him we’d love to play.”

Chaminade didn’t have a game scheduled for this week. The Eagles were going to start their spring season next Friday against Mission League opponent Serra of Gardena, but did have an inter-squad scrimmage planned. Instead, an official game was played after the administrations for each school went the extra mile to set up the contest.

The game felt like a glorified scrimmage at times. The coaches agreed to play second-string players in the last five minutes of the second and fourth quarters.

The opening touchdown of the game came from Highlanders running back Christian Serrano. La Habra quarterback Justin Gil passed for a touchdown and rushed for one. Gil was 14 of 19 for 183 yards.

Chaminade sophomore quarterback Indiana Wijay fumbled twice, each resulting in a touchdown return for La Habra before halftime. One return was by Brian Kight, the other by Niko Munoz.

Wijay did have his moments, completing eight passes for 115 yards, including a 67-yard completion to Jordyn McIntyre to set up a 2-yard touchdown plunge by Paul Holyfield Jr. Sophomore quarterback Jacob Macias threw a pass for a touchdown with under a minute left.