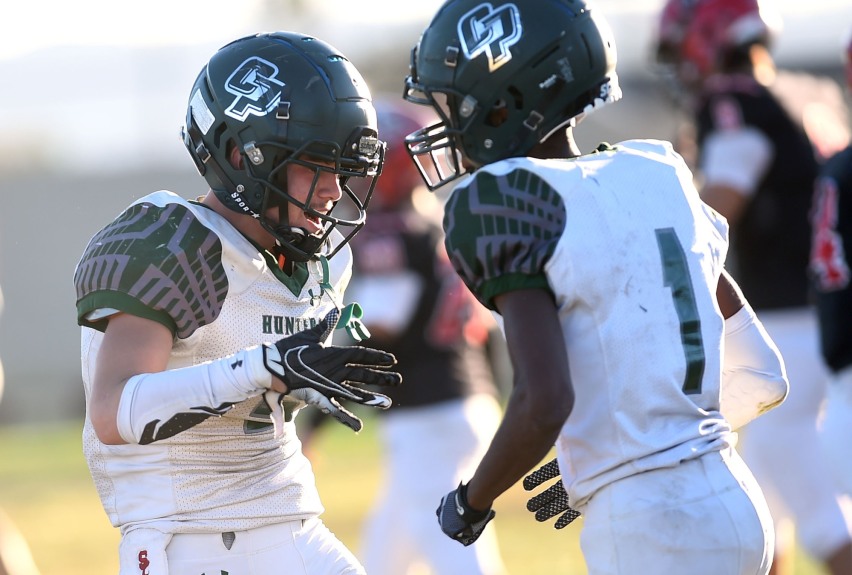 Canoga Park’s offense is known for its big plays. The scouting report on the Hunters is to limit those big plays. But that’s easier said than done.

Kayden Collins ran for 253 yards, including touchdown runs of 98 and 67 yards, to anchor Canoga Park football’s 27-6 win over Arleta in the City Section Division I quarterfinal Friday afternoon.

“The credit goes to my offensive line,” Collins said.

If the big plays aren’t coming from Collins, they come from Dane Reed. Reed ran for 84 yards and scored two touchdowns – one running and the other on an 85-yard kickoff return. Reed is a junior transfer from Westlake High where there wasn’t a lot of winning. Now, the Hunters are one win away from playing for a City title.

“It’s a great feeling,” Reed said of the postseason run. “My freshman season at Westlake, we won like two games, and it’s not a nice feeling losing games. Winning games is a beautiful feeling.”

Canoga Park (7-4) will play at No. 1-seeded Dorsey next week in the semifinal after the Dons came back from 21-0 down to edge Cleveland 34-28 in double overtime.

Reed scored the first touchdown of the game on a short-yardage run with 5:38 left in the first quarter. Arleta (9-3) responded with a short-yardage score of its own from fullback Ross Cajucom, but Reed’s kick off return came on the next play to balloon the Hunters’ lead back to 13-6.

Collins, whose primary position is running back, was moved to quarterback a couple weeks ago.

“Coach wanted to run threats in the backfield, so now its me and Dane (Reed), he takes the weight off buy shoulders a bit,” Collins said. “It’s pretty easy.”

He certainly made it look easy. He broke for a 98-yard touchdown to make it 20-6 at halftime, then delivered the gut punch with his 67-yarder with 1:57 left in the third quarter for a 27-6 lead.

Arleta (9-3) running back Kelvin Duran played the game with a cast on his left arm, but still managed to run for 72 yards in the game. He finished the season with over 2,186 yards rushing and 31 touchdowns.

Reseda defeated Eagle Rock 20-13 thanks to three touchdown throws from Regents quarterback Anthony Morris. Reseda will take on Venice in the other Division I semifinal Friday.