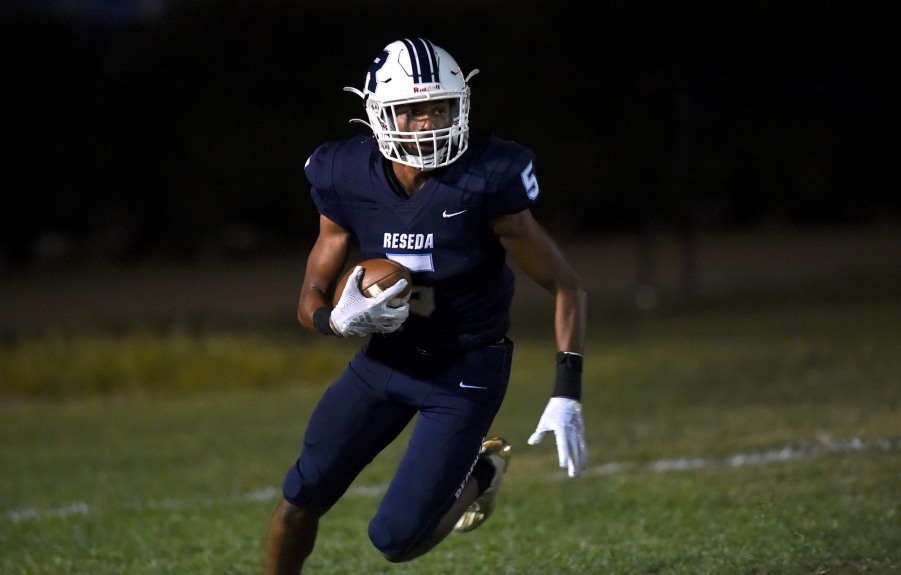 Reseda’s Jerry McGee made the final play of the night with an interception to stop Kennedy’s final drive in a 21-13 Valley Mission League victory at home Friday night.

McGee’s night was full of big plays as he tallied 137 yards receiving, including an 85-yard touchdown reception, and two interceptions.

“It seemed like everyone thought (Kennedy) was going to win because they’re 5-0, like we were the underdogs,” McGee said. “But we’re the Regents. I feel like nobody in league can compete with us. We’re not losing anymore.”

Reseda ballooned its one-point lead to 21-13 after Kameran Charles scored on an 8-yard run to the outside with 4:48 left in the game. A late Reseda fumble gave Kennedy a promising drive with less than two minutes left to potentially tie the game, but McGee’s interception sealed the win.

Kennedy’s final drive is ended by an INT from Jerry McGee, his second of the night. McGee has been fantastic. Big plays on offense, including an 85-yard TD catch and two INTs.

McGee had the quarter’s third interception, which led to an 85-yard touchdown reception from Avalos that gave Reseda a 14-7 lead at halftime.

Avalos found Skochinksi on a 3-yard touchdown play in the third to make it 14-13 after a missed PAT.

“I’m proud of our guys,” Cassidy said. “I told them that after the game. We’ll get better from this. Now that we’ve seen speed, it won’t be as foreign to us.”