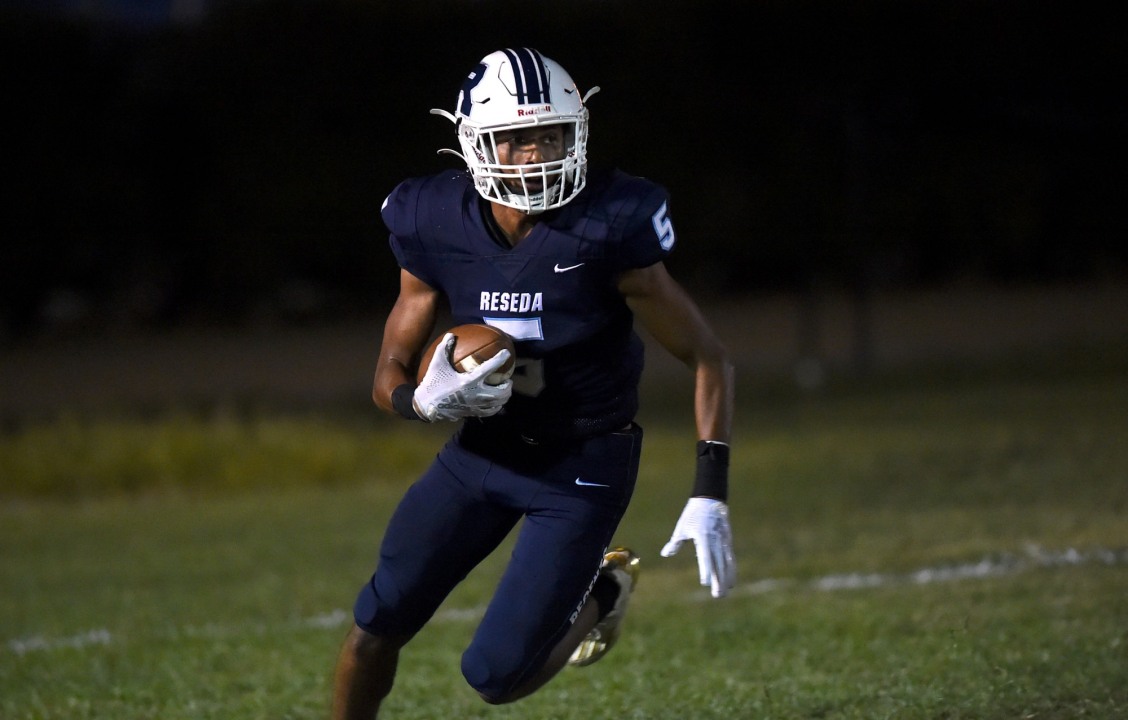 Reseda’s Jerry McGee made the final play of the night with an interception to stop Kennedy’s final drive in a 21-13 Valley Mission League victory at home Friday night.

McGee’s night was full of big plays as he tallied 137 yards receiving, including an 85-yard touchdown reception, and two interceptions.

“It seemed like everyone thought (Kennedy) was going to win because they’re 5-0, like we were the underdogs,” McGee said. “But we’re the Regents. I feel like nobody in league can compete with us. We’re not losing anymore.”

Reseda ballooned its one-point lead to 21-13 after Kameran Charles scored on an 8-yard run to the outside with 4:48 left in the game. A late Reseda fumble gave Kennedy a promising drive with less than two minutes left to potentially tie the game, but McGee’s interception sealed the win.

Kennedy’s final drive is ended by an INT from Jerry McGee, his second of the night. McGee has been fantastic. Big plays on offense, including an 85-yard TD catch and two INTs.

“That’s a good team over there,” Kennedy football coach Troy Cassidy said. “They have speed we haven’t seen yet this season. They’re the defending City Division I champions for a reason.”

Kennedy (5-1, 1-1 Valley Mission) did come into the game unbeaten, but played opponents that combined for just six wins. Reseda (2-2, 2-0) had played much tougher opponents, including one-loss St. Pius and unbeaten Palisades.

“Those tougher games prepared us for a game like tonight,” McGee said.

It didn’t take long for Reseda to show off its explosiveness. The Regents scored in just two plays on their opening possession. Anthony Morris connected to McGee for 52 yards before Kaden Jones punched in a 1-yard touchdown run to take a 7-0 lead.

Kennedy later responded with a 24-yard touchdown connection from Ryan Avalos to Paulo Skochinski to tie the game at 7-7 with 4:52 left in the first quarter.

The second quarter was riddled with turnovers including three interceptions in consecutive possessions. Jojo Moreno nabbed an interception for Reseda before Kennedy’s Daniel Plaza took it back to stump a promising Reseda drive.

Kameran Charles scores on an 8-yard TD run to give Reseda a 21-13 lead over Kennedy with 4:48 left to play. pic.twitter.com/zUhfwv4YYy

McGee had the quarter’s third interception, which led to an 85-yard touchdown reception from Anthony Morris that gave Reseda a 14-7 lead at halftime.

“I’m proud of our guys,” Cassidy said. “I told them that after the game. We’ll get better from this. Now that we’ve seen speed, it won’t be as foreign to us.”