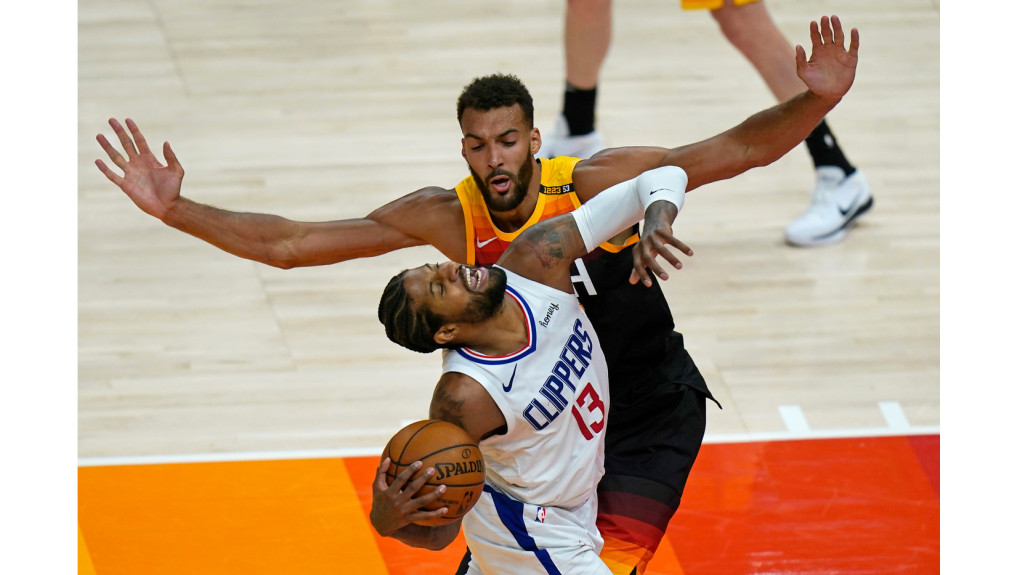 The Clippers are craning their necks, looking up from a 2-0 hole for the second consecutive series – facing a daunting uphill climb even after they clawed all the way back from a 21-point deficit on Thursday night. In the end, they needed even more against Donovan Mitchell and the rest of the dynamic Utah Jazz cast.

Despite the Clippers’ latest show of resilience, top-seeded Utah fended off its visitors down the stretch to win Game 2 of the best-of-seven Western Conference semifinal series, 117-111, before another pumped-up crowd of 18,007 at Vivint Arena.

The series returns to Staples Center for Games 3 and 4, starting with Saturday’s 5:30 p.m. game.

The fourth-seeded Clippers won only one home game in the first round against the Mavericks, Game 7 in L.A. to become just the 28th NBA team to rally after trailing 2-0 in a playoff series (of any length) – something that they said will instill some confidence going home.

“You what they say about a series; it doesn’t start until someone lose on their home floor,” said the Clippers’ Reggie Jackson, who scored a team-high 29 points. “So we have to take care of home court, go back get ready for Game 3. That’s the only game that matters. Do everything we can to get a win and then regroup from there.”

“We all got to put our will out on the floor,” said Leonard, who lifted the Clippers against Dallas and also was part of a 2-0 series comeback in the Eastern Conference finals during the Toronto Raptors’ 2019 title run. “See what we did in the first two games and try to limit our mistakes and just keep going on from there pretty much.”

Utah – which finished the regular season an NBA-best 52-20 — is 6-1 at home in the postseason after finishing 31-5 in Salt Lake City during the regular slate.

But Jackson almost delivered the hosts another blemish.

The good-natured guard scored 16 of his 29 points in the third quarter, when the Clippers outscored the Jazz 33-27 to give themselves a fighting chance to steal one in Utah – despite 37 points from Mitchell, who became the first Jazz player to score 35 points or more in consecutive playoff games since Karl Malone in 1988.

Mitchell’s total included only 10 after halftime, when he was buoyed down the stretch by his teammates (who didn’t even include All-Star guard Mike Conley, who missed his second consecutive game with a hamstring strain).

Jackson had 24 points after the break on 9-of-14 shooting — including back-to-back 3-pointers in the fourth quarter that gave the Clippers their first lead, 101-99, with 6:37 to play.

“He’s as good as it gets from guard play, with creating shots and making tough shots,” George said. “And so, you know, it’s big for us. It’s huge for us. Especially when we are going through moments where we need a basket, Reg always comes up big in those moments.”

Those back-to-back buckets completed the comeback from a 21-point deficit with 9:37 to play in the third quarter after the Jazz bolted out on a 10-2 run out of the half – the same advantaged with which they’ve started both Games 1 and 2.

But Utah regained control with two free throws by Rudy Gobert – now a three-time NBA Defensive Player of the Year, who also had a playoff-career-high 20 rebounds, three blocked shots and two steals in Game 2 – and a 3-pointer by Royce O’Neal that pushed the Jazz’s advantage to 110-103.

The Clippers missed their next nine shots, including a putback attempt by Leonard – whose tip was short and fell into the hands of Ingles, who sauntered up the court and, finding himself unguarded, buried a 3-pointer that made it 113-103 with 3:07 left.

“As much as anything, in my mind, it’s what we did after that that was really good,” Utah coach Quin Snyder said. “We took a punch and we were able to kind of, to collect ourselves and obviously got stops late, played really good defense late, and then we did keep running.”

At last, Jackson stopped the bleeding, again, responding with a shot at the rim. That and a foul shot from Paul George got the Clippers within 113-108 with 59.9 seconds to play.

After Mitchell’s 8-footer made it 115-108 with 43.2 seconds left, Jackson attempted another 3 – which had nervous Jazz fans clutching their heads – that rimmed out.

George fouled Mitchell at midcourt, and after taking a moment to recover, Utah’s star sank one of two free throws to make it 116-108. A quick George 3-pointer cut it to five points with 8.1 seconds left, but besides one more free throw from Gobert, that’s all the scoring there was to be Thursday.

George also had 10 rebounds and six assists. Guarded gamely much of the time by Bogdanovic, Leonard finished with 21 points on 8-for-17 shooting – only two points coming in the fourth quarter.

The anticipated shootout between the NBA’s most prolific and most accurate 3-point shooting teams hasn’t yet transpired.

While Utah is taking its typical high volume of 3-pointers (the Jazz have averaged 44.5 attempts in the first two games, and they’re making an average of 18 of them), the Clippers’ postseason shooting struggles continue.

In their first two losses this round, the team that finished the regular season shooting an NBA best 41.1% from 3-point range is 37.5% from deep – on par with their postseason-long slump during which they’re hitting only 37.3% of their attempts from behind the arc.

“It’s been tough. We’ve only had a few games where we’ve gotten hot the way that we’re accustomed to, but that’s what I like about life. It’s the law of averages. We’re bound to get hot.”

Just like in Game 1 on Tuesday, the Jazz took a 13-point lead, 66-53, into the half after using a late 14-2 spurt to create some separation when the Clippers’ only make in their final seven attempts before the break was Leonard’s first 3-pointer, which cut the lead to 60-53.

Mitchell continued his all-out assault with 27 first-half points, the most by a Jazz player in 25 years – and more than Leonard (14) and George (nine) combined through two quarters. George shot just 3 for 9 to start the game and was minus-19 in the box score in 19 first-half minutes.

Clarkson – who finished with six 3-pointers for the second consecutive game – also gave Utah a boost early with 15 points in the first half.

Utah kept the pressure on after halftime – when Leonard picked up his second, third and fourth fouls in two minutes as the Jazz turned the 14-2 jog entering halftime into a full-blown 23-5 run.

But then Jackson started bailing water out of a sinking boat. While Mitchell played just 8:27 in the period (he went 1 for 6 for three points), Jackson took his star turn for the Clippers.

His third-quarter tally included 12 points during the Clippers’ 23-6 run that cut the deficit to just 82-78.