High school football can begin in L.A. schools as COVID-19 threshold is met 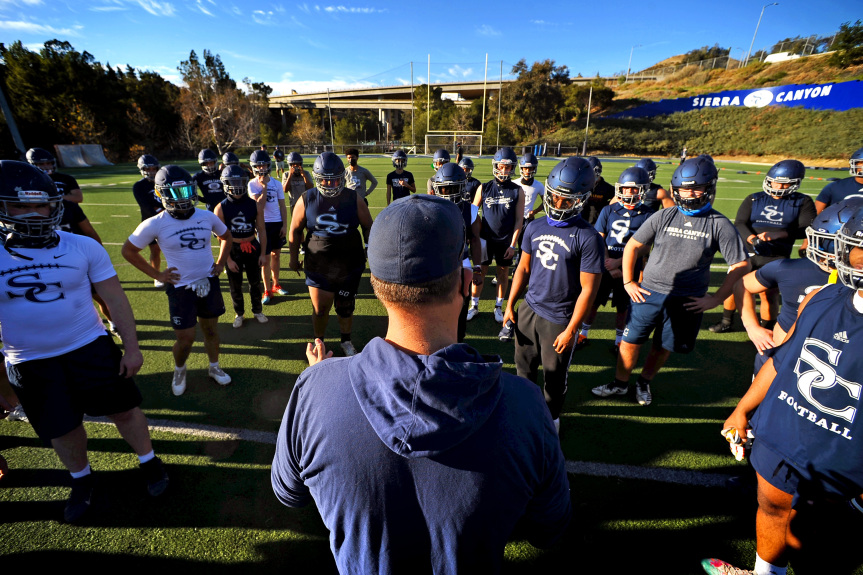 Better late than never, high school football is back.

The California Department of Public Health released its updated COVID-19 numbers Tuesday, Feb. 23, which revealed the adjusted case rate per 100,000 was 12.3 for Los Angeles County. The guidance given by state officials on Friday permits outdoor youth competition if a county’s rate reaches 14 or lower.

All that’s left is for respective county health departments to align themselves with the state’s guidance, and it’s game on.

This allows all outdoor sports to begin practice, pending school and district rules, and eventually compete. However, the same guidance says schools can only compete against schools in the same or neighboring counties.

“I was hopeful the rate would be at 14 (or lower),” Sierra Canyon coach Jon Ellinghouse said. “Now, I think it’s realistic to play six games.”

Ellinghouse will put that into motion Tuesday afternoon. The Trailblazers planned to be out on the field starting the first of 10 needed practices in helmets — and eventually pads on Friday — before a game can be played, a mandate from the CIF Southern Section.

In a perfect world, Sierra Canyon’s 10 days of practice would end on Friday, March 5, and would make them eligible for a scrimmage March 6. Ellinghouse already confirmed that Sierra Canyon will travel to play St. John Bosco in Bellflower on March 12. The calendar could allow six total games to be played before the Southern Section’s season end date of April 17.

“I’m ecstatic for the kids,” Herrington said. “Can’t wait to get back out on the field.”

The official date outdoor competition can begin is Friday, Feb. 26, which restricts football practice with full pads. Until then, practice will be with helmets.

“I had two practice plans ready for Tuesday,” Chaminade coach Ed Croson said when waiting for the latest COVID-19 numbers.

It paves the way for the Harvard-Westlake girls soccer program, too, which hasn’t met on campus since March. Head coach Richards Simms is excited to train with his team, but doesn’t think matches will be played for a couple weeks.

“The girls have been playing club soccer, which is good, they’re probably in decent shape,” Simms said. “But there are freshmen that have yet to he acclimated with the team.”

It’s not as easy for public schools, many of which will have to wait on guidance from respective districts on what is permitted. For some, the wait will be longer than for others.

Calabasas High, which is in the Las Virgenes Unified School District, could be one of the first public schools in action, because of Superintendent Dr. Dan Stepenosky’s love for athletics.

“We need sports back…our kids have been isolated, away from other contact for 10 months,” Stepenosky said in late January. “That is having a very serious impact on their social and emotional health.”

“I believe we’re ready to go, and moving forward as quickly as possible. I expect our football team will be practicing in pads on Friday,” Palarz said.

Ventura County, a neighboring county that includes Westlake, Moorpark and Thousand Oaks high schools, will have to wait one more week to begin practice. The adjusted rate for the county Tuesday was 16.9, still above the 14 threshold needed to begin.

However, the number dropped from last week’s 26.2, so it’s trending in the right direction.

“Our district needed more time anyway, so us not getting (the number) this week gives everyone more time to be more prepared going into next week,” Kirksey said. “I’m excited to feel like this thing is real.”

No guidance has been offered yet on indoor sports.