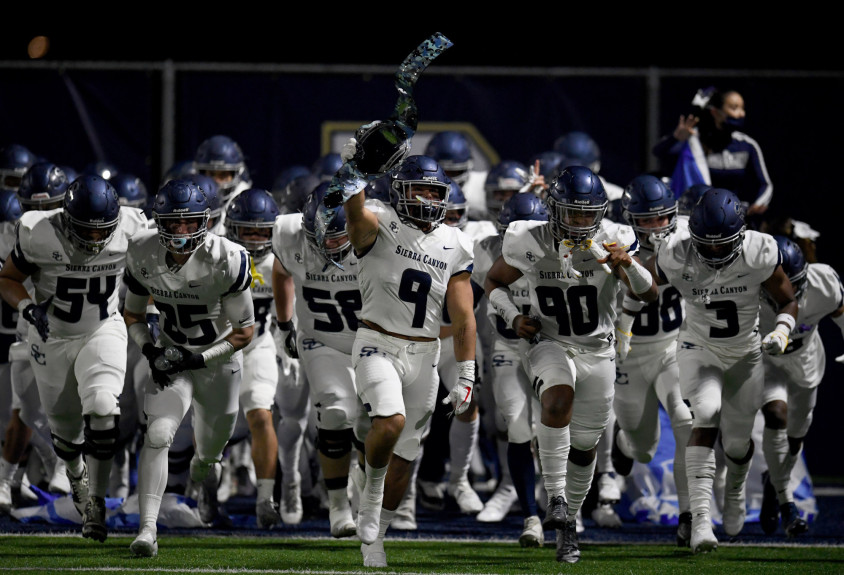 The CIF Southern Section football season is over, which concludes the Daily News’ weekly high school football rankings. The Daily News is doing separate rankings for the Los Angeles City Section teams, who play until April 30.

1. Sierra Canyon (5-1): If the Daily News operated like the Associated Press did before the College Football Playoff, the Trailblazers would be named “Daily News Football Champions” of the 2021 spring season. After Mater Dei and St. John Bosco, Sierra Canyon is arguably the third best high school football team in the state. Coach Jon Ellinghouse and his players will get a chance to prove they’re the best team in the state this fall when the CIF-SS playoffs return. Expect the Trailblazers to be a Southern Section Division 1 playoff team in November.

2. Chaminade (4-2): No player was more valuable to his team this spring season than Chaminade quarterback Jaylen Henderson. The Fresno State commit made the Eagles led them to a share of the Mission League crown. Henderson finished the season by throwing for 1,399 yards, 15 touchdowns with just one interception in five games. He also led the team in rushing with 345 yards and touchdown.

3. Alemany (4-1): The Warriors’ defense proved to be the difference-maker Friday in a 25-24 win over Serra of Gardena. A blocked punt returned for a touchdown earned Alemany a share of the Mission League title. The Warriors return all of their key playmakers, including QB Dylan Gebbia, RB Floyd Chalk and WR Kevin Green – all juniors this season. Alemany will be the favorite to win the Mission League in the fall, and could be one of two local teams to earn a Division 1 playoff berth.

4. Oaks Christian (3-2): The Lions suffered collateral damage from Grace Brethren and Westlake not completing their Marmonte League schedules. Oaks Christian had to forfeit its 69-0 win over Calabasas due to an ineligible player (clerical error). Oaks Christian will return a lot of talent, including RB Derek Boyd and QB Cole Tannenbaum.

5. Saugus (5-0): The Centurions took down Valencia 21-7 thanks to three touchdowns from quarterback Colton Fitzgerald to lift their first outright Foothill League title since 2008. Saugus will lose Fitzgerald and leading receiver Hunter Girch to graduation, but return 10 starters on its defense. That defense held the Vikings to just one score Friday.

6. Simi Valley (4-1): The Pioneers captured their first Canyon League title in over 30 years by defeating Oak Park, 56-7. Sophomore running back Caleb Alvary emerged as one of the area’s breakout performers this spring. He finished with 11 touchdowns and 477 yards in five games.

7. Paraclete (3-3): The Spirits finished their season with a lopsided loss to Sierra Canyon, but it was one of few programs in the area to play six games. That’s a coup for coach Dean Herrington, who gave his seniors as many games as possible. Senior running back Amir Bankhead will graduate as one of Paraclete’s all-time best.

8. Valencia (4-1): The Vikings have a lot to look forward to, including a fall rematch with Saugus. Quarterback Tyler Voss, running back Daniel Hernandez, and wideout Duhron Goodman all return.

10. Highland (5-0): The Bulldogs finished the season as Golden League champs. Sophomore running back Brandon Johnson, who ran for more than 300 yards and scored six TDs this spring, will likely be the go-to player the next two seasons for coach Richard Lear.