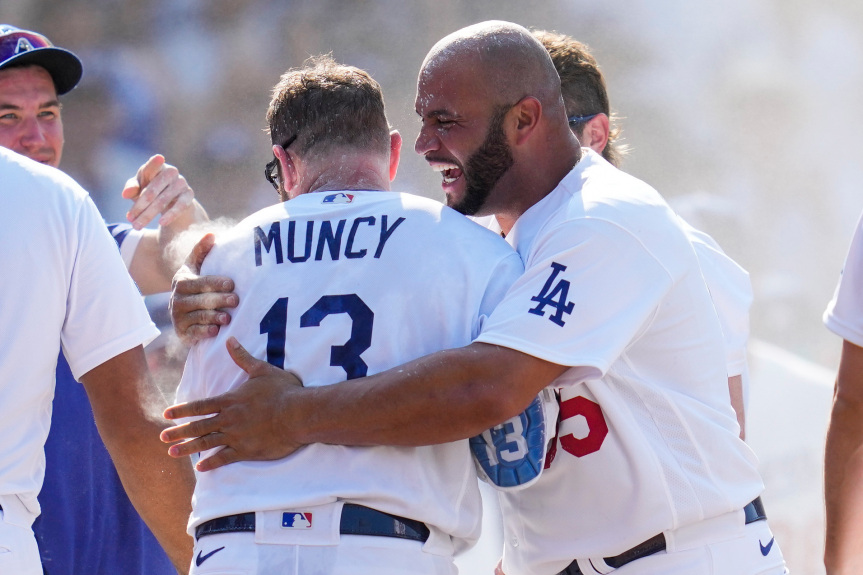 Max Mucy had a plane to catch.

The solid contact of a record-setting 22-run, 21-hit, eight-home run game still reverberating off the hills in Chavez Ravine, the Dodgers went quietly for the first seven innings Sunday afternoon, managing just one run on five hits. But they rallied for three runs in the eighth inning to tie the game and won it on Muncy’s walk-off home run in the ninth, beating the Arizona Diamondbacks, 7-4, on Sunday afternoon.

“It was a good feeling,” said Muncy, who had three hits in the game. “It was nice to end the first half on a high note, have a little momentum going into the break, let the boys have a happy break and come back ready to go.”

Muncy’s break will be spent in Colorado where he and four teammates plus Manager Dave Roberts and his coaching staff will participate in the All-Star Game at Coors Field.

Narrowly avoiding losing a series to the team with the worst record in baseball only slightly mitigated the way the Dodgers dragged into the break, losing four of their final seven games – to the last-in-the-east Miami Marlins and the last-in-the-west Diamondbacks.

Nonetheless, the Dodgers reached the mid-season break 21 games over .500 (56-35) with the second-best record in baseball despite having their core group of Mookie Betts, Cody Bellinger, Justin Turner, Corey Seager and Muncy in the lineup together just three times (way back in the first week of April).

“Considering what all we’ve been through, I’d say it’s pretty good,” he said. “I don’t know how many injuries we’ve had – 20, 30, whatever the number is. The fact that we’re playing really good baseball and we have a really good record right now. I’d say we’ve done a good job.

“Obviously we have a lot of potential to go. We haven’t played anywhere near the caliber that we are capable of playing. I’d still say we’ve done a good job based on the number of injuries and stuff that we’ve had.”

When Betts led off the bottom of the first inning with a home run off Diamondbacks starter Merrill Kelly, it was the ninth home run the Dodgers had hit in nine innings at bat against the Diamondbacks.

It was also the last damage they would do against Kelly.

The Diamondbacks right-hander retired 12 of the next 14 Dodgers batters following Betts’ homer. The Dodgers didn’t get another runner past first base until AJ Pollock flared a one-out double into right field in the fifth inning.

Muncy also doubled with one out in the sixth. Kelly left the game with cramps in his right leg at that point. Muncy got to third base but was stranded there and the Dodgers went into the eighth inning trailing 4-1.

“You’d like to think that it just carries over automatically. It just doesn’t work that way,” Roberts said of the slow-arriving offense after Saturday’s gluttony. “Fortunately we got some momentum in that eighth inning and the ninth.”

The ball fell on the track for a single, scoring one run. Two batters later, Ramirez hit Will Smith – actually his jersey – with a pitch to drive in another run. When Chris Taylor blooped a single into no-man’s land in shallow center field, the tying run scored.

Albert Pujols led off the ninth with a single. Zach Reks pinch-ran and moved to second on a sacrifice bunt. After getting to a cautious 3-and-1 count to Betts, the Diamondbacks opted to intentionally walk him and pitch to Muncy.

It was the kind of questionable decision that blows up on teams with 26-66 records. Diamondbacks reliever J.B. Bukauskas left a 2-and-1 fastball over the plate to Muncy who put an end to the game with the Dodgers’ 11th home run of the series.

“We held serve (in the first half) and now it’s our service. We have to take advantage of it,” Roberts said, returning to a tennis analogy he has used frequently. “I think this is when the really good clubs start to ascend. And I think we have a really good club.”

Closing out the first half with a #walkoff 🔥 pic.twitter.com/BpuC6uXqQm