Dodgers come back to beat Braves, gain a game on Giants 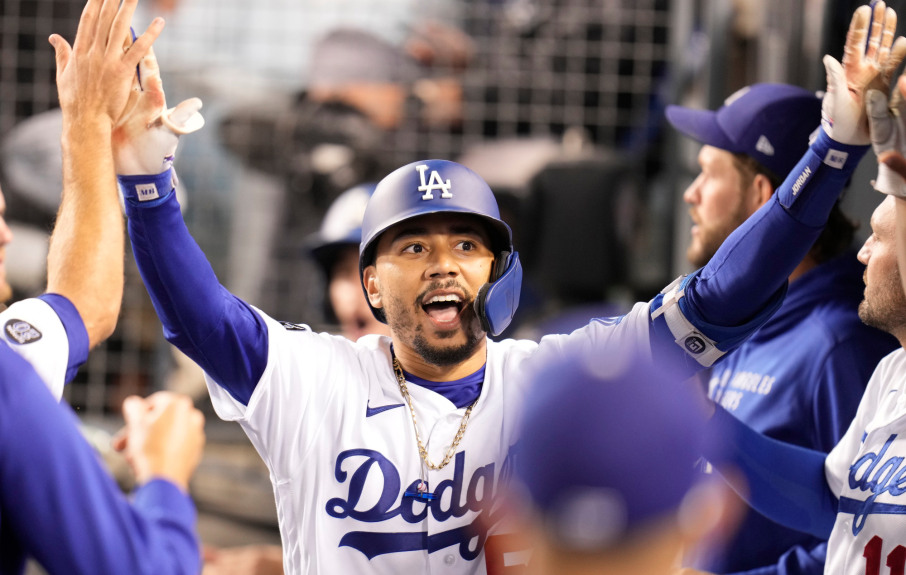 The Dodgers had a chance to gain a game in the standings on Tuesday night.

This time, they rose to the occasion.

Punctuating their best month of the season on the final day of August, the Dodgers rallied for one run in the seventh inning and another in the eighth to beat the Atlanta Braves, 3-2, before an announced crowd of 44,952 at Dodger Stadium.

The score was tied, 2-2, when Corey Seager ended an eight-pitch at-bat against Tyler Matzek with a gap-splitting double, driving in Mookie Betts with the winning run.

Betts had led off the inning with a walk. He also hit a solo home run in the fourth inning and robbed a potential home run at the end of a long run into the right field corner in the second.

With his mother, Diana Collins, and his young daughter in the stands, Betts reached base in three of his four plate appearances. A hip injury limited Betts to 11 games in August, but he managed to contribute five home runs among his 11 hits. His hip was a non-issue Tuesday.

“We’re a lot better team when he’s out in the field and healthy,” Seager said of Betts.

The San Francisco Giants lost to the Milwaukee Brewers earlier in the evening. That allowed the Dodgers to move to within a half-game of first place – the closest they have come to leading the National League West since July 6.

The rivals will play a crucial three-game series this weekend in San Francisco.

August was an unusual but ultimately successful month for the Dodgers. Identifying who constituted “the Dodgers” at any given moment was arduous. Twenty-seven different players managed to log a plate appearance. Twenty-five players threw a pitch. For comparison’s sake, the Dodgers didn’t use 25 pitchers in an entire season until 1998.

Nonetheless, the Dodgers (84-49) finished August with a 21-6 record, their most successful month of 2021. Coincidentally, the first-place Giants (84-48) had their best month too, going 19-9. The Dodgers have gained only 2½ games on first place since the end of July.

Tuesday, they handed the ball to their homegrown ace.

Buehler did not allow a hit until the third inning. Joc Pederson, a familiar face with an unfamiliar bottle-blonde mop of hair, made it count, hitting a solo home run to right field on a pitch well above the strike zone.

It was the third game in which the former teammates have faced each other this season. Pederson went 1 for 6 with a bunt single against Buehler before he was traded from the Chicago Cubs to the Braves.

“I know I’m going to get a text from him or whatever now,” Buehler said of Pederson. “People aren’t supposed to hit that pitch that way.”

Another former Dodger, Travis d’Arnaud, drove in the Braves’ second run. After Betts robbed his potential second-inning homer in right field, d’Arnaud clobbered a double to the left-field corner on the heels of an Austin Riley single in the fourth inning. Atlanta led 2-0 at that point.

The Dodgers began their comeback with Betts’ 19th home run of the season. That proved to be their only run against Braves starter Charlie Morton. The veteran right-hander allowed only three hits and walks in six innings, striking out eight.

“He located well,” Seager said of Morton. “He had us off. He’s got a really good curveball. He kept us off-balance with it all night. He did a good job. Hats off to him.”

Buehler nearly matched Morton but settled for a no-decision. He allowed four hits and two walks while striking out eight. By allowing two earned runs in seven innings, his ERA for the season rose to 2.05.

In the bottom of the seventh, AJ Pollock walked and went to third base on a single to right field by Cody Bellinger. Pinch hitter Chris Taylor did his job, lifting a two-strike slider into right-center field. Pollock tagged up and easily beat the throw home from Pederson, tying the score at 2.

Blake Treinen (5-5) pitched a scoreless eighth inning, striking out the side. Kenley Jansen struck out two in a scoreless ninth, earning his 30th save of the season.

Another day, another Mookie homer. pic.twitter.com/hkQSHEKjXE

CT ties it up for the #Dodgers! pic.twitter.com/sdbF4W6pLZ

The @Dodgers are a half-game behind the first-place Giants. 👀 pic.twitter.com/d9aXsYrxfy

“There’s not too much that Mookie does that surprises us at this point.” @buehlersdayoff (7 IP, 4 H, 2 ER, 5 K, 2 BB) reflects on his outing and Mookie robbing a HR early in tonight’s game. pic.twitter.com/HUsPoiGTVW