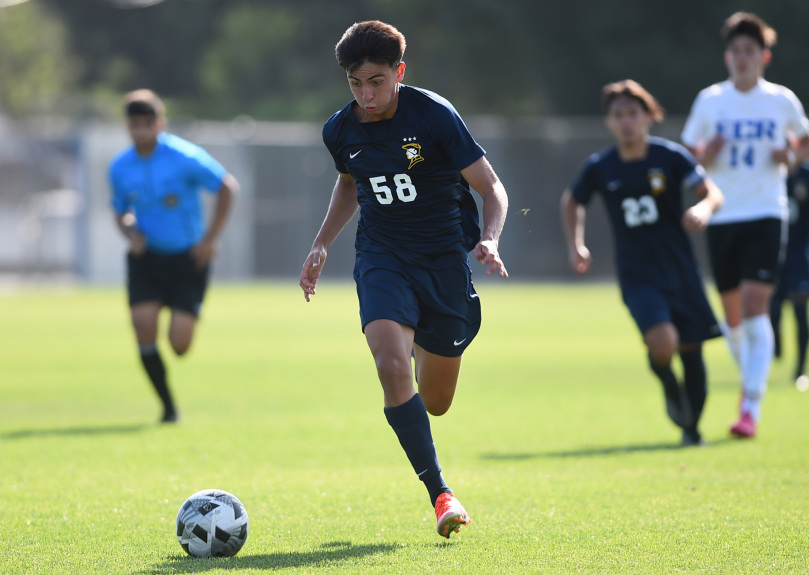 Some players are extra-ordinary. They stand out one way or another. It might be super speed, unbelievable skill, or a never-quit attitude. Whatever it is, it’s undeniable.

Diaz stood out in every facet. The junior forward showed his speed, touch, toughness and leadership – all ingredients that helped him score two goals and assist another to keep the Patriots 8-0 this season.

“He plays the game with a lot of intensity,” Birmingham coach EB Madha said.

Diaz scored the match’s opening goal, a one-touch finish with his right foot, polishing off a perfect cross from teammate Diego Nava in the first 10 minutes. Minutes later, he took on two El Camino Real defenders before setting up Enrique Pineda for a goal to make it 2-0.

“The defense was giving me a lot of space today, so I took advantage of that. I just keep going at them all day,” Diaz said.

Marcos Guerrero scored a screaming free kick from just outside the 18-yard box before halftime to make it 3-0. Diaz netted his second goal midway through the second half. He took a short corner kick from the left side, dribbled for an angle and score on a right-footed shot.

El Camino Real (7-1) came into the match unbeaten, dismantling opponents just like Birmingham has this season – both City and Southern Section teams. But on Tuesday, it was obvious which team came ready to play.

“They were the aggressor all match,” El Camino Real coach Ian Kogan said.

Birmingham showed it’s the team to beat in the City Section, but also proved it’s one of Southern California’s top boys soccer teams. The Patriots will likely get their chance to play notable programs like Loyola (10-1-2) and/or Cathedral (9-0) in the SoCal Regional playoffs this spring.

“Our goal is to win City and State…we are looking forward to playing Cathedral, we want to beat them,” said Diaz.

Madha has been coaching at Birmingham for 20 years. He thinks this group has a chance to be his best team ever.

Birmingham and El Camino Real will play again May 6 in Woodland Hills at 6 p.m.