Clippers stars Kawhi Leonard, Paul George eager to ‘get back after it’ 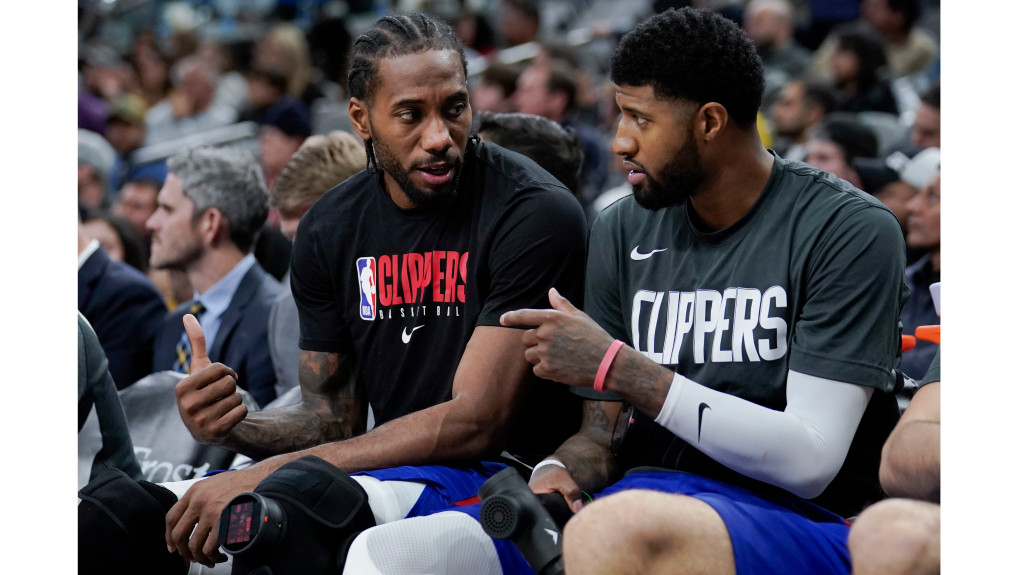 Nah, Kawhi Leonard hasn’t been stewing over the Game 7 loss to the Denver Nuggets. Nor has he been sweating chemistry concerns.

To hear him tell it, as distastefully as the Clippers’ season ended in September – not only did they blow a 3-1 series lead in the second round of the Western Conference playoffs, but they did it by relinquishing double-digit leads in each of the three losses that sealed their season – he isn’t sick over it at all.

Instead, he said he relishes the opportunity that it’s presented.

In their first media availability of the season on Friday, via a Zoom video conference, Paul George, too, indicated he hasn’t been dissuaded by last season’s collapse.

The 30-year-old Palmdale native – who, like Leonard, can opt out of his contract and become a free agent at season’s end – even reiterated his commitment, going so far as to proclaim his desire to spend the rest of his career with the team: “I want to be here, I want to retire a Clipper. This is where my heart is and I’m happy.”

“It does leave a bad taste in your mouth, blowing a 3-1 lead,” said Leonard, who contributed to the disastrous outcome, scoring just 14 points on 6-for-22 shooting in Game 7, when he and George were held scoreless in the fourth quarter and scored only one basket apiece in the second half.

“But I love it,” Leonard said enthusiastically, by his standards. “These are things that build the player. It’s the things that I like, the challenge. The road of going to a championship is hard. I love the process. I am enjoying the process still. We’ll see how strong we are and if we can build from things like this.

“That is what makes players.”

The 29-year-old Moreno Valley native clearly is eager for his second crack at delivering a first championship to the Clippers – which would be No. 3 for him, after earning rings in San Antonio and Toronto.

When Leonard and George teamed up in L.A. last season, they brought with them title expectations, unfamiliar pressure for an organization that has never reached a conference finals series in its 50-year history. And when those lofty hopes fizzled painfully in the postseason, it led to the departure of Doc Rivers and the hiring of Tyronn Lue as head coach.

George was critical of Rivers on a snippet released this week previewing his appearance on the “All The Smoke” podcast, bemoaning both the way he was used and the team’s lack of adjustments in the Denver series. But on Friday, George wanted “to clear things up,” he said.

“I respect Doc,” George said. “Doc is a hell of a motivator, a hell of a coach. Doesn’t mean I agree with everything that we did, but that does not belittle the fact that I respect him and I respect him in that position. … We felt we were the better team, but (the Nuggets) played harder than us and they ultimately got past us. I said what I said, but I did want to clear it up because the notion out there is that I don’t respect Doc and putting the blame on Doc, which is not the case. I am to blame in that situation just as much as anyone.”

The way things ended led to such soul searching in the Clippers’ camp, and a couple of notable offseason alterations – though not wholesale changes, not with the two SoCal-bred stars at the helm, determined to get it right.

“That’s kind of been where we’re at as a pair and as a duo. And it has to start with us, and from there, we can enforce that upon the team.”

In September, when the season-ending defeat in the bubble was only a few minutes fresh, Leonard said that the Clippers needed to play smarter. On Friday, he suggested that he thinks the veteran additions – namely center Serge Ibaka and wing Nicolas Batum – will help in that regard.

He also revisited some of last season’s long list of challenges, which started early and remained till the bitter end.

For one, coming off an offseason “procedure,” as he described it Friday, Leonard was limited last training camp. And George, who was rehabbing from surgeries on his shoulders last preseason, wasn’t able to participate at all.

“Team chemistry builds from Day One,” Leonard said. “Coming into camp … me and P.G. didn’t play hardly any of the preseason games.

“This year, us being able to start training camp and going full speed with the guys since Day One, I think that will just build up for a better chemistry so guys aren’t either falling in line in the middle of the season or first game. We are all here together now.”

Once last season began, injuries and injury management meant the All-Star tandem played together in only 37 of the Clippers’ 72 regular-season games – when the Clippers had all 10 rotation players healthy just 11 times.

Add the months-long coronavirus hiatus to that, and then introduce a bubble fraught with personal trials, including multiple positive COVID tests and the deaths of loved ones.

“I just think all that had to play into accountability and chemistry,” Leonard said. “That all played a big role.”