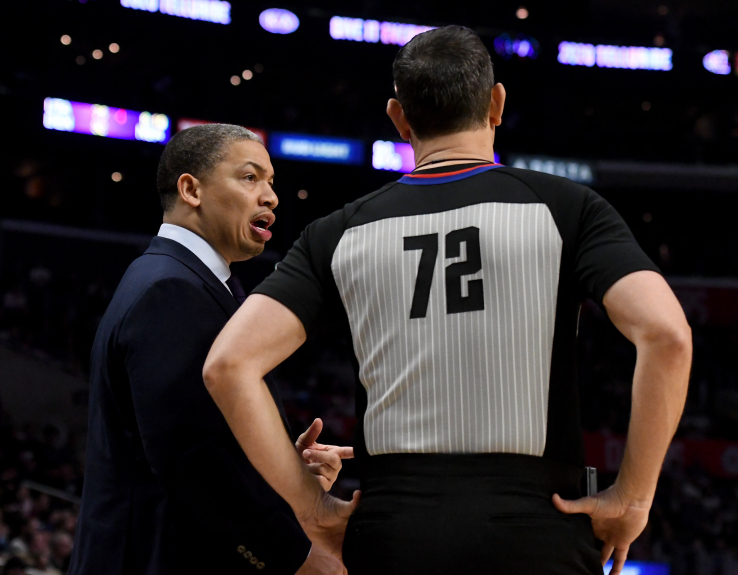 Lue has been expected to be among the candidates to fill the position since it was vacated when Rivers and team owner Steve Ballmer determined, after much discussion, that it was time for the veteran coach to move on. He moved quickly: Rivers was introduced Monday as the Philadelphia 76ers’ coach, one week after parting ways with the Clippers.

Meanwhile, Rivers’ former team is in the process of searching for the right fit to lead a team with lots of potential, in a situation with more than a little bit of pressure: Star pairing Kawhi Leonard and Paul George both will have player options on their respective deals at the end of next season.

In addition to the Clippers, Lue reportedly also is in the running for head coaching positions in Houston and New Orleans, according to Adrian Wojnarowski. Prior to Rivers taking the Sixers’ job, Lue reportedly was a candidate for that position.

A 43-year-old Missouri native who played point guard for 11 NBA seasons, this past year Lue worked as an assistant under Rivers, with whom he’d worked previously as an assistant in Boston and, in 2009, with the Clippers.

Lue joined the Clippers this time after spending parts of four seasons as the head coach in Cleveland, where he directed LeBron James-led teams to an NBA title and two other Finals appearances.

A native Ohioan who went attended high school in Germany, Brown returned to the Cleveland in 2013, before being fired after one season. In between, he  succeeded Phil Jackson as the head coach of the Lakers during the 2011-12 lockout-shortened season before being relieved of his duties there five games into the 2012-13 schedule.

Before his first head coaching gig in Cleveland, Brown served as an NBA assistant for 13 seasons, including for two years as Rick Carlisle’s top assistant in Indiana and three other seasons on Gregg Popovich’s staff with the San Antonio Spurs, whom he helped win an NBA title in 2003. Brown also previously worked as a scout and video coordinator in Denver, and as an assistant in Washington under Bernie Bickerstaff.

Ham got his NBA coaching start as a member of Brown’s Lakers staff; he was hired as an assistant in 2011 and stayed on after Mike D’Antoni took over.

A 47-year-old originally from Michigan, Ham has been an assistant under Bucks head coach Mike Budenholzer since 2013 — starting in Atlanta, where he was hired after serving as head coach of the Albuquerque Thunderbirds in the G League.

This year, Ham was reportedly among the candidates considered in Chicago before Billy Donovan was hired last month.

As an NBA player, Ham suited up for six teams in eight seasons. Known for some raucous dunks, he was a member of the 2003-04 Detroit Pistons team that defeated Kobe Bryant and Shaquille O’Neal’s Lakers in five games.

Despite a litany of injuries during the coronavirus-interrupted regular season, the Clippers finished 49-23 and seeded second in the Western Conference. They struggled in their first playoffs with Leonard and George on the squad, however, going 7-6 en route to relinquishing a 3-1 second-round series lead against the Denver Nuggets.