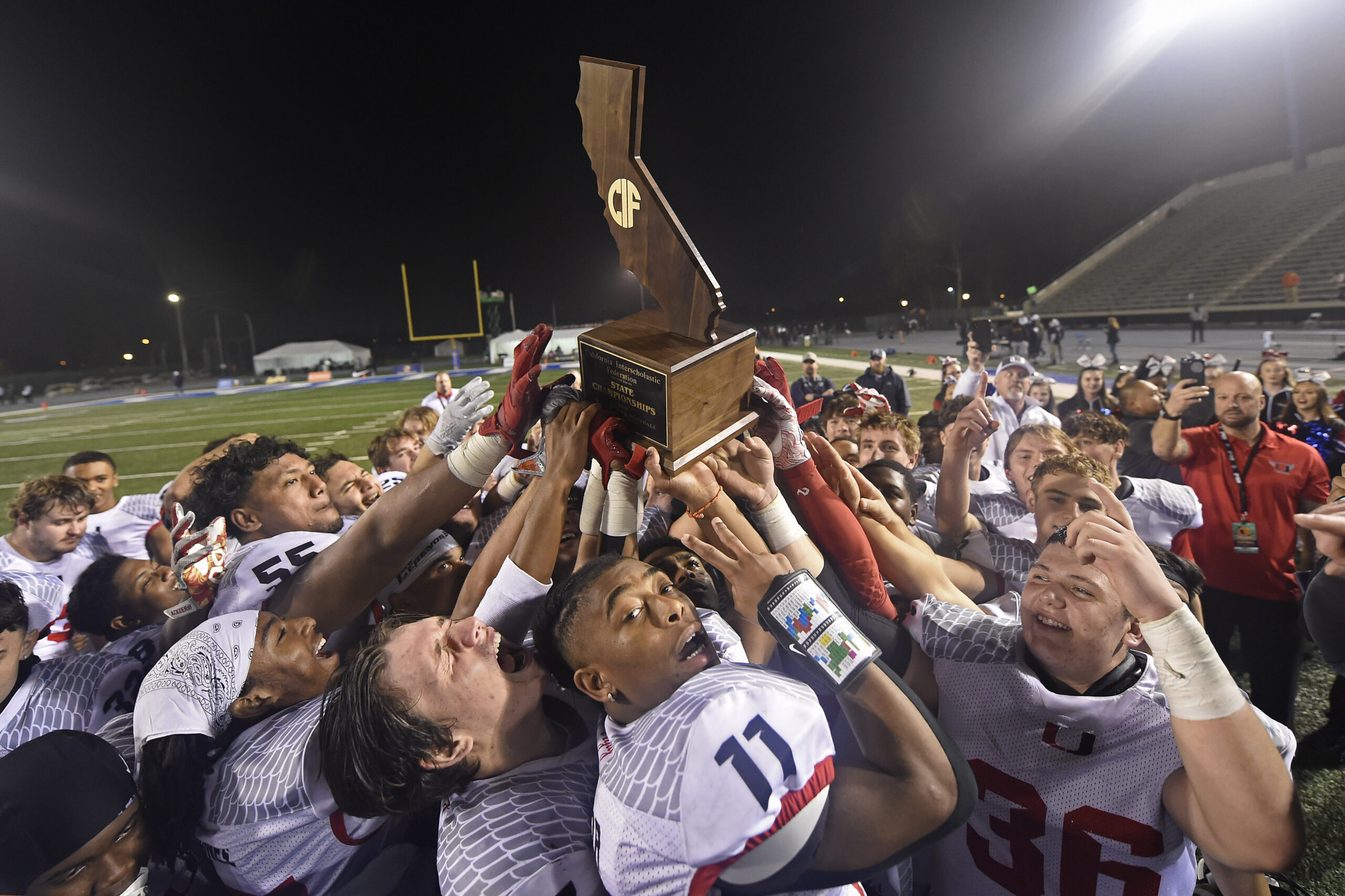 “We feel for our student-athletes and all the coaches and everyone involved that wants to get back on the field, the pool and the gym, we understand their frustration,” CIF State executive director Ron Nocetti said.

“When we made the decision to set the calendar in July, we all knew there could very well be another surge, but we had to at least try. But without updated guidance, we can’t play at this time and we’re hopeful we get guidance soon so we can work with our sections and membership on a path forward.”

The pause arrived with the fall season approaching in about one week in some sections of California and in about two weeks after Gov. Gavin Newsom announced a delay in the release of new guidance because of the recent rise in coronavirus cases.

Since Aug. 3, high school sports have been prohibited from competition and limited to modified conditioning and skill training workouts. The guidelines from the California Department of Public Health (CDPH) focus on social distancing and other safety measures to decrease the risk of spreading the coronavirus.

The CIF State said it does not expect the new guidelines from the CDPH until Jan. 1 at the earliest, or just before the scheduled start of football games on Jan. 7-8.

The CDPH’s office of public affairs told the Southern California News Group on Tuesday that guidelines “may be released in the future” and shared its concerns.

“Positive cases are rising at unprecedented levels,” the CDPH stated. “With 52 of 58 California counties in the purple tier (widespread risk of COVID-19), the state is concerned about hospital capacity following holiday-related mixing and increased indoor activity.”

Football practices were scheduled to begin as early Dec. 7 in four sections in Northern California and as soon as Dec. 14 in the Southern Section.

The L.A. City Section had scheduled practices in some sports for Dec. 14.

The approaching dates suggested an announcement from the CIF State or state health officials could be imminent.

“It wasn’t surprising because of what was going on with the sections in the north,” Irvine Unified School District athletic director Mark Cunningham said of Tuesday’s announcement. “CIF had to make a move, and they at least gave us some information so we can process it and go forward.”

Last school year, CIF State championships were canceled in basketball because of the coronavirus pandemic and the spring season abandoned by mid-March, wiping out numerous championships — from baseball and softball to swimming and track and field.

The CIF State said the reason for calling off its fall championships is to potentially give schools more time to play games, if needed. The games were scheduled for March and April.

“They know how important the games are for the kids and they’re willing to sacrifice the playoffs so the kids could play in more games,” Cunningham said. “That’s a great statement. They want it to work, and I think they’re doing everything in their power to make sure it works.

In an anticipated move Tuesday, the CIF State announced that boys volleyball has been shifted from the fall to the spring schedule, which will delay its start until at least February.

The CIF State earlier shared its intention to move boys volleyball, if necessary, because the sport was canceled this past spring and believes it deserved special consideration to combat possibly having two consecutive seasons washed away.

Boys volleyball was supposed to begin playing games on Dec. 12 in the Southern Section.

Southern Section spokesman and assistant commissioner Thom Simmons said the section will discuss moving boys volleyball to the spring with its schools.

“CIF State won’t be announcing the dates for boys volleyball in the spring until January, so we want to take the time until then to see what works best for our member schools,” Simmons said.

Nocetti also addressed football, a pillar for school and community spirit, potentially being moved to the spring.

“I don’t see football moving back to that time period simply because it’s not just about football,” he said. “If you move football back to the spring, you have to move every sport from Season 1 (fall) back to the spring. The other sports want a season just as much as football, and that’s what it comes down to.”

Many teams in the Southland have been following strict guidelines to successfully hold conditioning workouts, which will be allowed to continue until the state issues new guidelines.

“Since the beginning of October, we have been actively working with the CaliforniaDepartment of Public Health trying to get a plan approved for return to play for education-based athletics,” Wigod wrote. “The plan was developed by our CIF Sports Medicine Advisory Committee, which is made up of doctors and other health professionals from around the state. The centerpiece of our proposal was an attempt to incorporate the four colored tier system: purple, red, orange and yellow, that is applied to each of California’s 58 counties, and directly connect those color designations to high school sports.

“In other words, what does it mean for practice and/or competition if your county is in the purple tier, red tier, orange tier, yellow tier? Included in our plan was a sport-by-sport breakdown of various health and safety protocols to be implemented for each specific sport that incorporates the differences between what is recommended for volleyball and how it is different from cross country, different from football, etc. We believe that information would be extremely useful to you in navigating through practices and competitions held on our campuses. The original plan we submitted has been reviewed by the California Department of Public Health and we have been awaiting their response, which was expected a couple of weeks ago. However, with the recent surge of COVID-19 in California during the month of November, the CDPH has not yet provided guidelines for us to follow and we are not sure when that will happen.”

Schools have been commended by Dr. Mark Ghaly, secretary of California’s Health and Human Service Agency, for showing they can reopen safely.

Jim Rose, the football coach at Birmingham Charter, the defending Open Division champion in the L.A. City section, said players and coaches who have been counting down the days until their first full practice should prepare for another delay.

“I think a mid-February start is more realistic,” Rose said.

Rose believes a January start is highly unlikely, especially for the City Section which have football bylaws that include a minimum requirement for four weeks of preparation, including contact in pads, before being allowed to play a game.

In the Southern Section, football teams need 14 days of practice before playing a game.

Rose is going to have to tell his players to hang on … again.

“It’s depressing,” Rose said. “Not just for sports, but all the kids stuck at home.”

Chris Fore, president of the California Coaches Association, said such explanations “break our hearts as coaches.”

“You can see the hurt in many of these kids’ eyes and hear it in their voices because the realization and possibility of never playing their sport again seems to increase every day,” said Fore, a member of the recently formed West Coast Coaching Alliance.

“We are going to continue to do our part to give our players an opportunity to play. It’s just another obstacle for us to overcome. We encourage everyone to do their best to beat this virus.”

The National Federation of State High School Associations has said no state has canceled high school sports for the entire 2020-21 school year.

San Clemente football coach Jaime Ortiz believes Tuesday’s announcement will lead to only a delay for athletics, not a cancellation.

“We have some time as a society to get the numbers down so kids can participate in athletics,” Ortiz said.

“Some say by delaying we would be able to get the virus contained, get the vaccination and all those things. Some have said if we’d done it earlier we would have had a better chance of finishing. I don’t know. You can’t go back in time and change things. CIF did what it thought was in the best interests of the kids.”

La Habra football coach Frank Mazzotta said he expects the start of the football season to be pushed back, which would mean several of its nonleague games in January will be canceled.

“We’re going to be happy with any season that we get,” said Mazzotta, who has coached La Habra to seven CIF-SS championships. “I think we need to be flexible. If we can only play league games I don’t think anybody would complain.

“If they move the calendar and push football back later in the year, everybody probably would be fine with that as well.”

Arroyo athletic director Jim Singiser, the school’s former football coach, hopes that Tuesday’s announcement doesn’t lead schools and districts to cancel the fall season in the coming weeks. He feels they owe it to the kids to wait as long as possible.

“None of us control what’s going to happen,” Singiser said. “But what we need is a date in January that we can begin practice that will give us enough time to start a league season in February. And then we wait and see what happens.

“If you can’t meet that date to begin practice in January then you cancel the season because at that point, you can’t push things back any further. But at least give us a chance to walk until our heels are on the edge of the cliff and we’ve done everything we can do.”