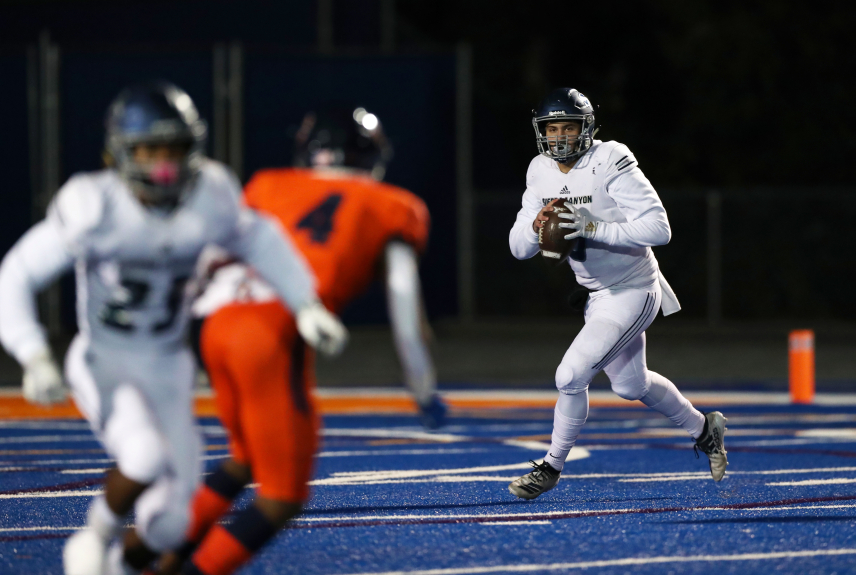 Chayden Peery’s plan in June was to graduate early from Sierra Canyon High this school year. Under normal circumstances, the quarterback would have been able to play his senior season, graduate in December and then head off to college and take part in Georgia Tech’s spring practice.

In July, CIF State announced an altered schedule that marked football to start in January instead of August due to the coronavirus pandemic. Peery decided he would stick around at Sierra Canyon for his senior season.

CIF announced last week it was putting a hold on the start of high school sports at least until Jan. 1 as it waited for updated guidelines on youth sports from the California Department of Public Health. The CIF also announced the cancellation of the regional bowl games and state championships.

“There’s so much uncertainty, and I felt like the decision to go to Georgia Tech is a certain thing,” Peery said. “I’m excited to get started.”

Peery confirmed Tuesday, Dec. 8 he will graduate early from Sierra Canyon and enroll at Georgia Tech next month. His orientation begins Jan. 12 and his first day of class is Jan. 13.

“Chayden had a great career here. He did exceptional things,” Sierra Canyon coach Jon Ellinghouse said. “There’s no doubt he will do the same at the next level. I wish him the best.”

Peery had been the starting quarterback at Sierra Canyon since his freshman season. During that time he won two CIF Southern Section titles (2018, 2019), two CIF State regional bowls and led the team to two straight CIF State title game appearances.

His exit will create a compelling quarterback competition for the Trailblazers, who have a lot of talent at the skill positions, including Virginia Tech commit DJ Harvey, wideouts JoJo Phillips and Donovan Williams, and running backs Jason Jones and Notre Dame Sherman Oaks transfer Anthony Spearman.

Ellinghouse says there are four quarterbacks on the roster who will compete for the position. The group has a mix of experience and youth.

“We have very talented quarterbacks in our program,” Ellinghouse said. “I’m opening it up for competition like every other position. We’re going to be just fine.”

Don’t be surprised if the program becomes the new home for a transfer quarterback. When Miller Moss transferred to Mater Dei in June, Arizona State-commit Finn Collins transferred into Alemany from Calabasas High two days later. Then Calabasas welcomed Tyler Ward, a transfer from Utah, less than 72 hours later.

Peery said he was willing to play a full high school season, which could have lasted until April, and then join Georgia Tech’s workouts in June although he knew “it would be a lot on the body.” But the CIF decision last week made it clear to him that he should graduate early and begin his college career.

Last year as a junior, he threw for 3,401 yards and 18 touchdowns. He completed over 60% of his passes and threw just one interception. He rushed for five touchdowns.

“It was very difficult when I had to tell coach (Ellinghouse),” said Peery. “But I had to do what’s best for me.”