Cardinals’ Lars Nootbaar comes home to build a memory, spoil some others 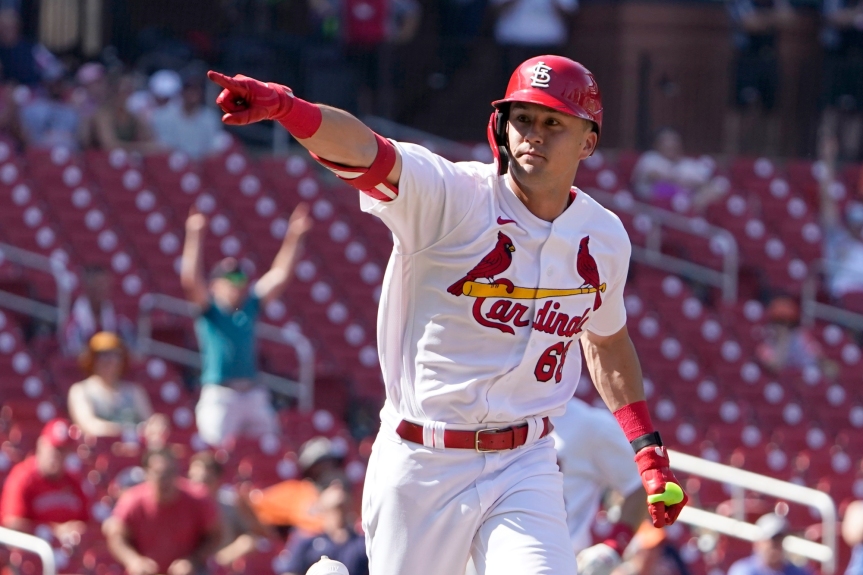 If Lars Nootbaar does something heroic in Dodger Stadium on Wednesday night, the crowd won’t yell “Noooot,” as the St. Louis crowd does.

Nootbaar, who played at El Segundo High and USC, is here as an invading force, to stop a Dodger postseason run before it leaves the gate.

Every come-from-behind club in a pennant race needs a little prod from someone unforeseen. Nootbaar leaped to catch Pete Alonso’s aspiring home run on Sept. 15, keeping the New York Mets from slicing a four-run lead to one, and the Cardinals’ winning streak continued, all the way to 17.

It carried them to this National League wild-card playoff game against a club that won 106 games and has gone 18-3 since its last two-game losing streak, which was in St. Louis.

Nootbar hasn’t yet joined the saga. In 2020 he wasn’t deemed good enough to join the Cardinals’ developmental camp, with the players who spent the COVID-19 season waiting for a roster spot to open up.

Instead, Nootbaar spent time carrying around equipment for an aerospace company near LAX, reporting to work before 5 a.m.

This year he came up in June, went back down, came back up and hit .318 in August with a .979 OPS. The average slowed in September, but the Cardinals know they have a 24-year-old outfielder who has figured out things, hiking his career minor league slugging percentage of .334 to .442 with the varsity.

“When he did have to make a diving catch he’d pop right back up and immediately throw to the right base,” said Billy Traber, Nootbaar’s El Segundo High coach. “So much of what he did was instinctual.”

He played for three years at USC and signed after the Cardinals drafted him in the eighth round.

“He started pressing because he had to carry us offensively,” said Gabe Alvarez, then a USC assistant coach, now with the Detroit organization. “It hurt him in the draft, but he changed his swing and unlocked the power that was in there.

“But I don’t think of the plays when I think of Lars. I think of what a great, positive guy he is. He’s not shy. He makes friends with everybody, everywhere he goes. Everybody in that organization has been pulling for him.”

And those USC years remind Lars of the man who would be yelling “Nooot” loudest of all.

Herbert Nootbaar was Lars’ great grandfather. He contributed to the Trojans’ new baseball offices, and they are named after him. There aren’t that many Nootbaars.

“People thought it was a strange name for so long, but now they’re talking about finding a candy bar to name it after, having some fun with it,” said Charlie Nootbaar, Lars’ dad.

Herbert Nootbaar gave a lot of money to a lot of causes. He invested in a study institute at the Pepperdine Law School, and he contributed to the library of his friend Ronald Reagan. He was already established in agribusiness when he married Dorothy, in 1930, the daughter of a grain producer. Eventually, Herbert became the co-CEO of Ralston Purina.

Dorothy passed away in 1982. Herbert later married Elinor, an employee of his company, and that lasted 27 years until her death.

Have you ever driven south on PCH through Laguna Beach, and noticed a house just on the edge of a cliff over Three Arch Bay, close enough to the sea to catch a wayward dolphin? That’s where Herbert lived and lived and lived. Herbert passed away a week before Christmas in 2016, five weeks after his 108th birthday. Lars is one of his 28 great-grandchildren.

If you’re scoring, Herbert’s life began, in Chicago, in November of 1908 and ended in 2016. He came within about a month, on the front end, of spanning two Cubs’ world championships.

“He was pretty cogent, well into his 100s,” Charlie said. “He was quite a storyteller. He loved to go to USC games early and greet people. I can’t imagine how excited he would be to watch Lars in a game like this.”

To get here, of course, Nootbaar and the Cardinals had to win a month of games like this.