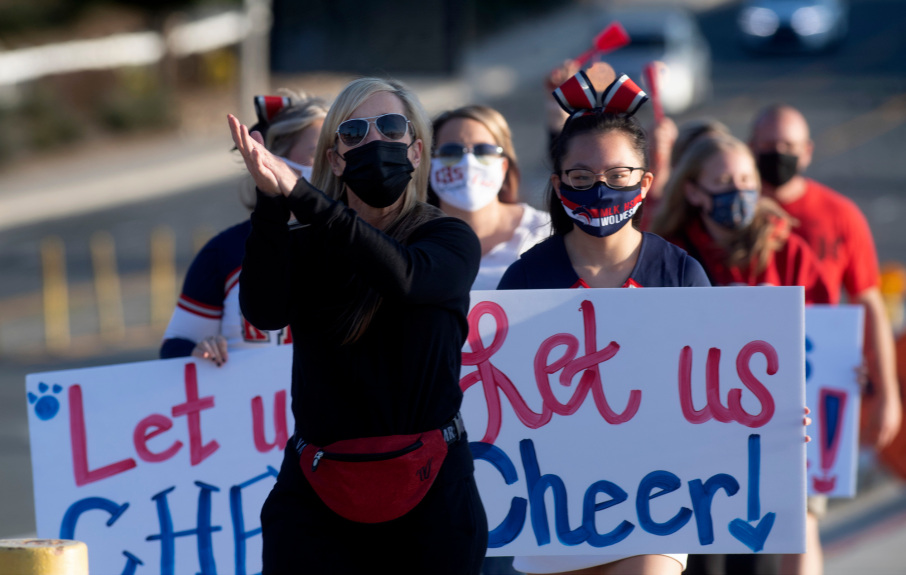 “Today, (California Department of Public Health) will clarify that sideline cheer is an allowable sport under the state’s youth and adult recreational sports guidelines,” a department spokesperson wrote in an email Friday. “Sideline cheer is considered comparable to competitive cheer as a moderate-contact sport and should follow all requirements of other outdoor moderate-contact sports.”

The department’s Youth Sports Q&A was updated Friday afternoon, making it explicit: “Sideline cheer is allowed as a moderate-contact sport,” and thus allowable in the counties in the red coronavirus tier. Los Angeles, Orange, Riverside and San Bernardino counties all entered the red tier in recent weeks.

“I didn’t really feel before like I had much of a voice as a teenager,” said Abbi Ruzicka, 17, who cheers for La Sierra High School in Riverside. “I can speak up and make a change in the world, even at the state level, which is still insane to me.”

Her teammates had helped draft a petition rallying opposition to Tuesday’s guidance and Ruzicka attended a pair of protests Thursday night, March 18, one outside the Riverside County’s public health department and one outside Martin Luther King Jr. High School in Riverside.

On Tuesday, the California Department of Public Health shocked parents who had expected that cheerleading — recognized as a high school sport in state law in 2016 — would be allowed to return to a normal state of affairs this spring alongside football by banning cheerleaders from the sidelines, lumping them in with “observers,” who were limited to one adult per household.

“Sideline cheer, band, drumline or other supporting groups are not allowed to attend sporting events at this time,” Tuesday’s guidelines read, in part.

Assemblywoman Lorena Gonzalez, D-San Diego, author of the 2016 bill that recognized high school cheerleading as a sport, had expressed outrage over Tuesday’s sidelining of cheerleaders on the sidelines.

“I was a cheerleader, a cheer coach and a cheer Mom. Cheerleaders understand strict rules, spacing and safety. Barring outdoor sideline cheerleaders, who can safely distance themselves from one another & wear masks, shows a disregard for these (mostly) young women,” she wrote on Twitter. “If we can safely resume high school sports, this must include outdoor activities that can also be done safely, including sideline cheer.”

Cheerleaders and their supporters were thrilled with the state’s turnaround on Friday.

Hermosa Beach mother Adrienne Less, whose children attend Mira Costa High School, said her kids had lost a lot of their joy with the cancellation of high school sports this year, and are “beyond excited” to have them back now.

“This is such a great lesson for all of our girls, to fight what is right and what you believe in, and to never give up,” Less said. “I saw my daughter’s spark come back.”

Scott Oper, whose daughter cheers for Riverside’s Arlington High School, said: “My daughter just came bouncing out of the room.”

“It just seemed like one more time that the girls are treated less fairly than popular boys’ sports.”

“Overall, this has got to be a great lesson for our teens to take forward for the rest of their lives, that they do have a say-so in this world today,” Buckland said.

Ruzicka is hoping she and her teammates will be able to cheer Friday night at the Battle of the Bell Game at Hillcrest High School, one of La Sierra’s biggest football games of the year.

Although cheerleading is now allowed on the sidelines, band and drumline are still not allowed there. Additional guidance is “forthcoming” from the state public health department, according to its Friday update to the Youth Sports Q&A.