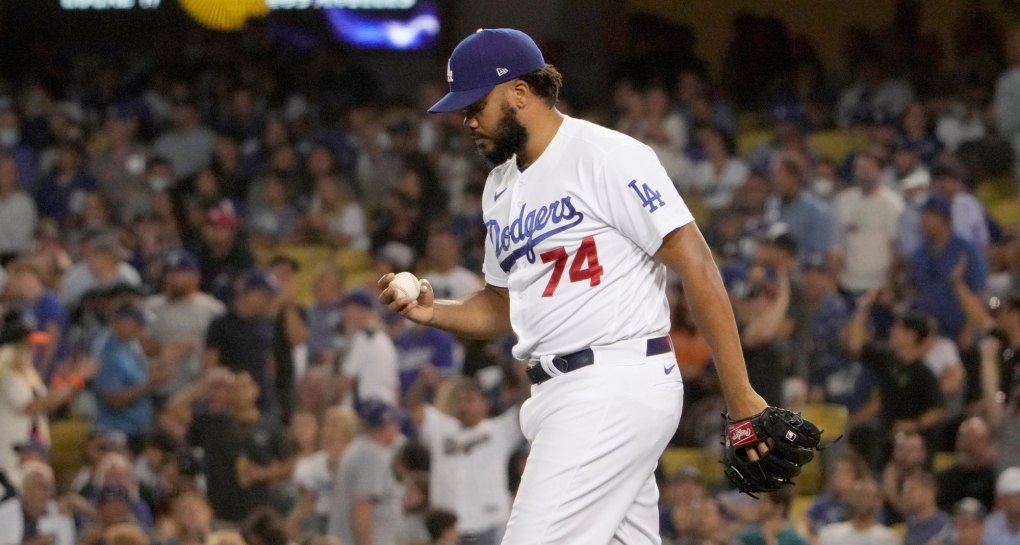 Twice in the past four days, the Dodgers have been three outs away from gaining a share of first place in the National League West for the first time since April and put their hopes in the hands of their All-Star-worthy but All-Star snubbed closer.

They still have not touched first place since April.

Kenley Jansen’s pique over being left off the NL All-Star team has not worn well. Jansen gave up a two-run home run to Wilmer Flores in the ninth inning Wednesday night, suffering his second blown save in two appearances since the mid-season break and the Dodgers lost to the San Francisco Giants, 4-2.

“I didn’t do my job today. That’s pretty much it,” Jansen said. “They got me today. We’ll move forward and be better tomorrow.”

Jansen retired just one of the six batters he faced in the ninth inning, leaving to a shower of boos from the home crowd with the bases loaded.

It was not the first time in recent seasons the franchise’s all-time saves leader was treated so rudely by the home fans – despite his years of service and 88.6 percent success rate (333 saves versus 43 blown saves in 12 seasons on baseball’s high wire).

“It does,” Dodgers manager Dave Roberts said when asked if it bothered him to hear Jansen booed by the home fans. “This guy is a lifelong Dodger. To start – the fans certainly have a right to voice their frustrations. Absolutely. I get that. But I do believe that this guy, born and raised as a Dodger … no one hurts more than he does, to be quite honest.

“He’s worked very hard to get back and should have been an All-Star this year. He’s had a fantastic season. There was a hiccup the other night (Sunday in Colorado). … He was looking forward to pitching at home. So to have that not go well – yeah, I’m disappointed to hear that certainly. He’s not going to say it. But I am.”

Roberts also voiced his feelings toward home plate umpire Andy Fletcher and was ejected in the ninth inning after Victor Gonzalez walked Curt Casali to force in a run.

“I just felt that the low strike was called all night long, both ways,” Roberts said. “In a big spot like that … the consistency that everyone is trying for, that we hope for – it just wasn’t consistent with the night.”

Ball four to Casali might just have been the trigger that pushed Roberts’ frustrations over the top after wasting the kind of starting pitching performance from Julio Urias that the Dodgers had tried to cobble together with spare parts the previous two nights.

“We’re all frustrated when you have a game in hand and you don’t win it late,” Roberts said. “But no one is more frustrated than Kenley. He expects a lot of himself. We’ve just go to keep going, put ourselves in position to win a baseball game. We’ve got Walker (Buehler) going tomorrow, a fresh bullpen and we’ve got to find a way to salvage the series.”

Buehler will be hard-pressed to do any better than Urias did Wednesday.

Urias gave up a solo home run to Mike Yastrzemski with two outs in the first inning.

And that was it.

Urias retired 18 of the next 21 batters he faced. After Cody Bellinger made a sliding catch of Austin Slater’s sinking liner to center field to end the third inning, the Giants didn’t even get another ball out of the infield against Urias in his seven innings.

“To see him go seven and ultimately lose the game is a tough one to swallow,” Roberts said. “But as far as Julio – outstanding.”

Chris Taylor continued his hot streak, matching Yastrzemski’s first-inning home run with one of his own – his third consecutive at-bat with a home run (a rally-sparking walk was also mixed in).

Mired in a deep, season-long slump Bellinger proved his worth with his legs as well as his glove, scoring the go-ahead run from first base on a two-out double to right field by AJ Pollock in the fourth inning. But the Dodgers’ offense took the rest of the night off. The final 13 Dodgers batters went down in order.

The Giants got the tying run on base when Buster Posey led off the ninth inning with a pinch-hit single off Jansen. A 1-and-1 cutter to Flores stayed up over the heart of the plate and he clubbed it into the left-field pavilion for the Giants’ eighth home run in this series and 144th of the season (tied with the Toronto Blue Jays for the MLB lead).

“I gotta just check tomorrow, check and see what it was,” Jansen said of performing a blown-save autopsy. “It’s just a bad one. I don’t want to overthink it. I work my butt off too hard for one moment like this to mess your season up. Ain’t no time to think about.

“These guys are going to play us tough like this the rest of the year. We’ve got to keep battling. I’ve got to be out there and be better. That’s pretty much it. Get those last three outs. Like I said, I’m not going to overthink it. Shake this one off and we’ll be back on the horse tomorrow.

“I didn’t do my job today. That’s pretty much it.”

Wilmer for the lead! 😱 pic.twitter.com/9pr6IqMHIw

“Obviously it’s not a good one today. You’ve just got to shake it off. Let it go and get back on that horse tomorrow. That’s pretty much it.” @kenleyjansen74 on his performance tonight. pic.twitter.com/zAeeVspjFj