At least 76 arrested after Laker fans crowd into Downtown LA 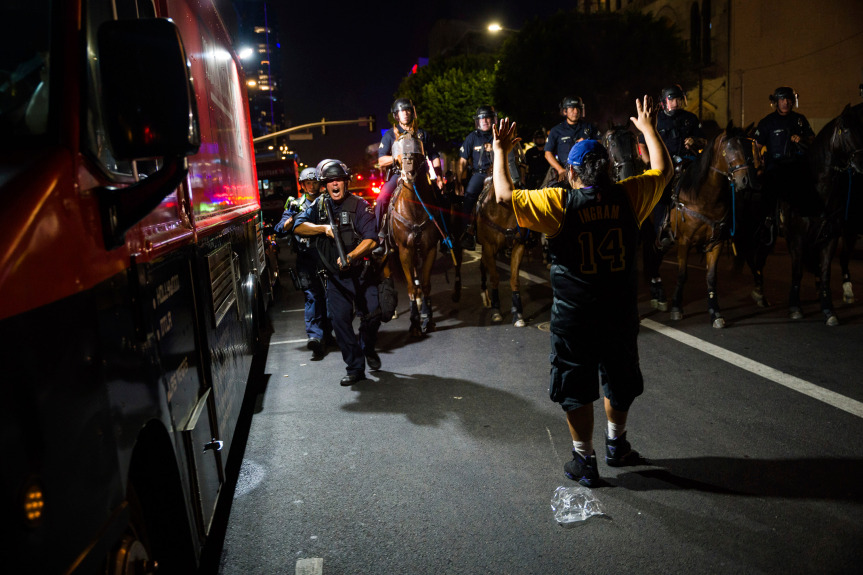 Police were called in Sunday night to break up a rowdy celebration of more than 1,000 Los Angeles Lakers fans outside Staples Center after the team won the NBA championship.

Los Angeles Police Department officials said 76 people were arrested after the huge crowd of fans descended on the arena at around 7 p.m.

Chanting “Kobe,” for the former Lakers star who died in a helicopter crash in January, and “Let’s go Lakers,” the fans gathered in two large groups outside the stadium after Game 6 of the Finals ended with a win.

Some fans climbed on top of vehicles, or up telephone poles and construction scaffolding. Others drove slowly through the crowd in their cars, with some doing donuts as fans watched from just feet away. At one point, some fans danced around fireworks that were exploding in the middle of a crowd.

After a line of Los Angeles Police Department officers arrived on foot and in their vehicles, some fans threw glass bottles, rocks, and objects at them, police said.

That drew out officers in riot gear, who dispersed the crowd with less-lethal projectiles.

“A larger portion of the group broke off and began vandalizing businesses while continuing to engage in violent behavior, some aimed at responding officers,” police said in their statement.

Suspects were arrested on suspicion of various charges, including vandalism, assault on a police officer and failure to disperse.

Police also said a Metro bus was damaged during the rowdy celebration.

The crowd arrived at Staples Center despite the ongoing pandemic.

City officials attempted to get people to stay away from the area, because of the the threat of of COVID-19 infection, or to at least wear masks if they chose to show up and mingle in large crowds.

Even as they gathered in groups, many fans could be seen wearing masks, though a significant number were not wearing them.

Large groups gathering outdoors are still banned. That likely means no Lakers parade — the team has not announced any kind of public event celebrating their championship.

“It’s still not safe to gather in groups,” Garcetti said. “Let’s honor our city’s triumph by protecting others and making sure we don’t spread the virus.”