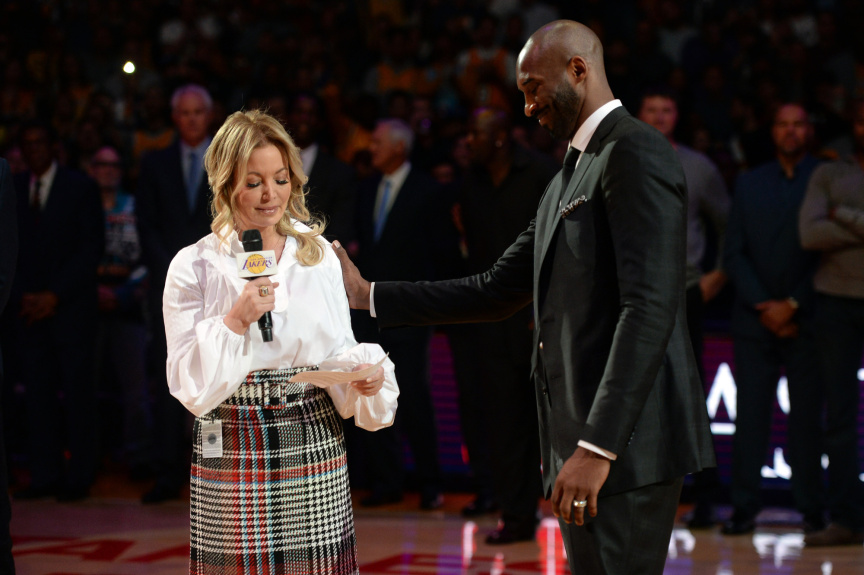 Jeanie Buss was always going to make the trip.

From Los Angeles to Connecticut, it’s a flight that eats up a whole day thanks to the time change, then an hour-long drive to the Mohegan Sun resort where the NBA is hosting its Hall of Fame ceremony this year. Minutes before midnight on Thursday evening, Buss arrived at the hotel, preparing herself for a “bittersweet” weekend.

The Lakers team owner and governor has been to Hall of Fame ceremonies for years: for the enshrinements of James Worthy, for Magic Johnson, for Shaquille O’Neal, for Chick Hearn, for her own father. This one, however, feels unlike any other.

“I knew I would be back,” she said in an interview with Southern California News Group, “I just didn’t think it would be like this. It’s with a heavy heart. I know Kobe would have been really excited about it.”

Saturday marks a milestone moment in NBA history, with three players who defined a generation getting inducted into the Naismith Basketball Hall of Fame. And yet for the league, the Lakers and the individuals who knew Kobe Bryant best, his death in January 2020 remains an open wound. There will never be a moment when Bryant’s 20-year career, perhaps the most memorable of any Laker, can be appreciated without that inevitable prick of pain.

Like many others, Buss feels the gravity of his loss often, especially with the anniversaries that pass of his accomplishments in life: the 81-point game, his farewell game, the celebration of his championships coming up. While his induction is a necessary and welcome step for a player whose career meant so much to the game and its fans, it’s another moment that underscores that he’s gone.

Buss tries to keep the pieces of Bryant she has left: She’s saved the last voicemail he left her, from December 2019 to express sympathy when her mother died. Hearing his voice reminds her how warm he could be, but also what the world lost.

“It’s like the grieving process all over again,” Buss said. “I fully expect in my life that this will happen again and again. With the anniversaries of so many of his great accomplishments, that makes it tough. But at least we have the ability to celebrate him, to be reminded of those moments. That brings us closer, even though it’s an impossible void to fill.”

Bryant’s legacy remains threaded throughout the organization’s modern-day structure. General Manager Rob Pelinka was Bryant’s agent and close friend. LeBron James and Anthony Davis were Team USA and All-Star peers, and a number of Lakers still wear his trademark shoes. One of the points of pride for the team is that Bryant’s ethos – including jerseys inspired and designed by Bryant himself – was so closely tied to the championship run.

Davis said his favorite Bryant story is when the Lakers were playing his then-New Orleans team and Bryant tore his right rotator cuff on a dunk. He played through it, shooting his shots left-handed. To Davis, it demonstrated Bryant’s “Mamba Mentality” that he’s tried to carry on to this day.

“He tried to instill that in me before his passing, and it’s kinda like, ‘OK, I see now, I get it,’” Davis said. “I get it from being on the floor, off the floor, it’s a way of thinking, and your approach to everything you do in the world. And I think the entire world has kind of adapted that a lot more since his passing.”

Bryant helped guide the franchise to where it is now in part by advice he gave Buss in 2017, when he told her to decisively take charge. Buss called the conversation “empowering,” which helped push her to make the difficult decision to oust her brother Jim Buss and Mitch Kupchak out of decision-making roles.

While it was still a long, convoluted journey from there to winning a title in 2020, it was a move that established Buss as the first female majority owner to win a championship in any of the major men’s American sports leagues. As Bryant did, Buss said she hopes to pay it forward.

“When I hear people say the first woman to head a championship team in the NBA,” Buss said. “It’s exciting to be the first, but I don’t want to be the last. I want to show that women can be in this position.”

If there is a silver lining to any of the solemnity of the Hall of Fame weekend, it’s that Bryant was able to see in life how appreciated he was. In retrospect, Buss appreciates that Bryant announced his retirement early, giving fans a chance to flock to his final games, for teams to sculpt elaborate tributes, for opponents to offer surprisingly sentimental thoughts on a player who was all too happy to grind them under his heel as a competitor in his prime.

Buss has fond memories of Bryant’s last game April 13, 2016, which saw the superstar send himself off with a 60-point game. But what stands out to her now was the L.A. Live plaza, festooned with balloons and banners, packed with fans celebrating his career. Buss said even Bryant himself was surprised by the outpouring in his final season.

“It was like this harmonious celebration of love for him,” Buss said. “Everyone who was there was there because we loved Kobe, and then he scored 60 points in that last game, and it was like we were all validated in our love for him. The way he inspired people, his mentality, it really resonated with people.”

That carries on to the league today, thanks in part to the players who looked up to Bryant, played against him or alongside him, or got to pick his brain for advice. Former Laker Julius Randle recently shared how his habit of getting to road gyms at odd hours was a habit he picked up from Bryant – this season, Randle is a candidate for Most Improved Player with the Knicks.

“It’s even more inspiring for me to try to continue the legacy that he built here,” he said. “And I think that goes for guys all around the league, just being able to realize the importance of his body of work on our game and for our generation. He’s the guy that everyone looked up to and wanted to be like.”

While memories of Bryant will live on, the way he’ll be remembered in the Hall of Fame is largely being shaped by his wife, Vanessa Bryant, who helped design the exhibit being installed in Springfield, Massachusetts. She didn’t take questions Friday, but she will speak at Saturday’s enshrinement along with Michael Jordan, Kobe’s basketball idol.

Buss said what will help the weekend will be seeing some of Bryant’s friends, contemporaries and loved ones and being able to tell stories about them. She’s also looking forward to spending time with the Bryant family, which she believes remains one of his greatest legacies: his surviving daughters Natalia, Bianka and Capri.

“I look at all those girls, and I see Kobe in them,” she said. “I know they’re going to go onto great things, too. They’re going to carry on his greatness.”