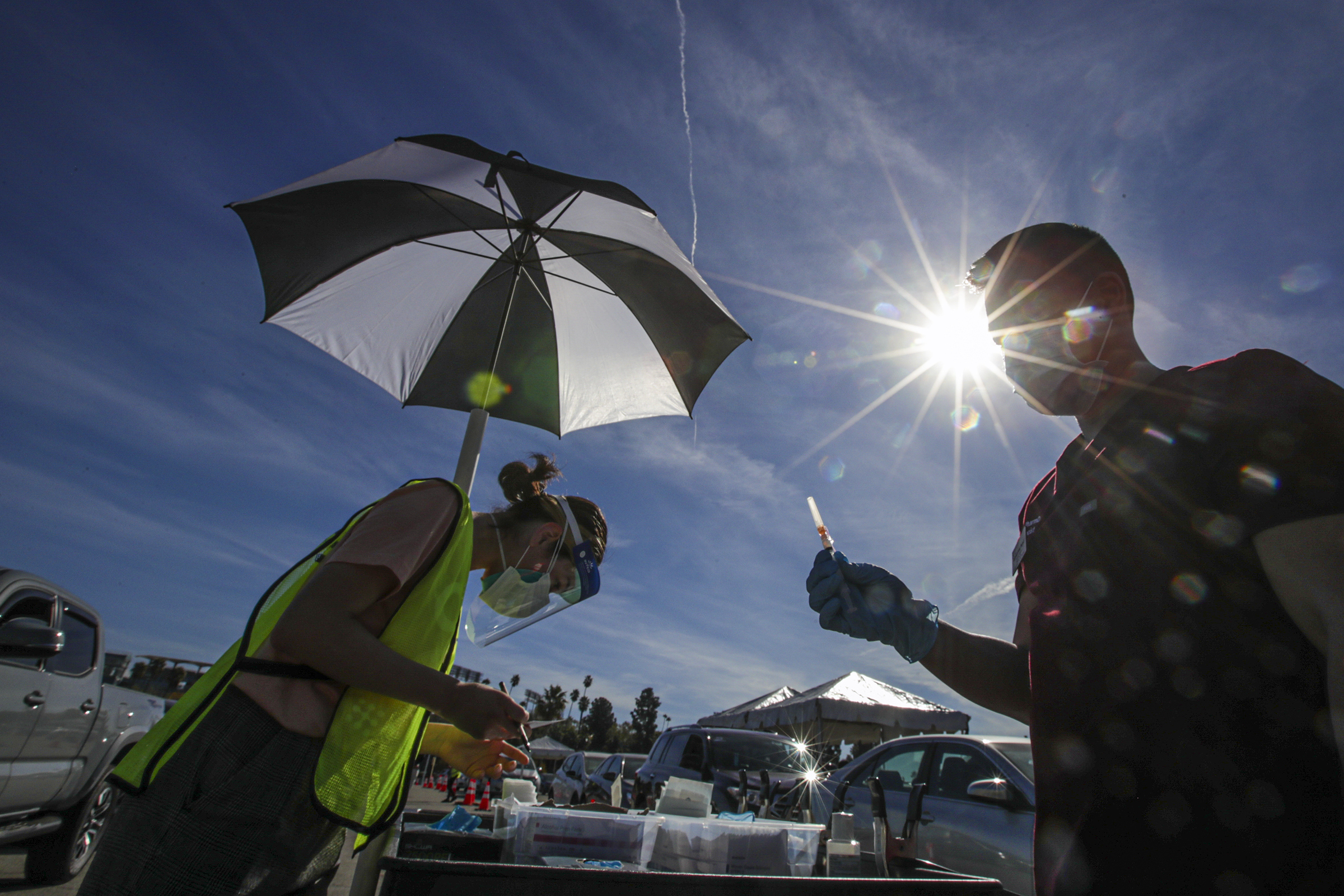 The next time anyone attempts to disrupt the queue of people in their cars seeking coronavirus vaccinations at Dodger Stadium, they could be met with arrests, the chief of the Los Angeles Police Department said Tuesday.

Saturday’s protest with between 25 and 50 sign-waving people who marched up Vin Scully Avenue from Sunset Boulevard led firefighters on scene to temporarily close Gate C – the entrance to the vaccination site at Dodger Stadium.

Speaking to police commissioners in a virtual meeting, Chief Michel Moore disputed that it was LAPD that closed the gate. He said anyone who was waiting after the fire department closed off the entrance was still able to get their vaccines that day.

The chief and some commissioners criticized the protesters, and suggested the group — made up at least partly of anti-vaccine activists and conspiracy theorists — was trying to stop people from getting vaccines altogether.

“No one interfered with the cars’ movement, but nonetheless they walked among these groups of cars that had their windows down, without masks,” Moore said. “This may have had a chilling effect of intimidation … on people seeking vaccinations at Dodger Stadium.”

Moore also said the protest clearly affected firefighters on the ground, who rushed to seal off the protesters from entering the stadium parking lot.

“It makes what happened at Dodger Stadium all the more reprehensible,” Decker said. “To interfere with people receiving life-saving vaccines … it’s beyond reprehensible.”

Since the protest, LAPD has faced intense criticism for what was described as a light hand taken with the demonstrators as they walked among the cars and up to the stadium entrance. Several public speakers at the commission meeting Tuesday noted the difference in force used against protesters in the wake of the George Floyd killing in Minneapolis last summer, with thousands of arrests and numerous documented uses of batons and less-lethal weapons.

After Decker asked what the department planned to do if there was another protest at the vaccination site, Moore said police were setting up a designated area nearby where demonstrations could take place. But anyone who leaves that area and walks onto Vin Scully Avenue among the cars could face arrest.

“My expectation is that enforcement will be swift and decisive,” Moore said.

This is not the first widely broadcast example of the delicate balancing act LAPD and other law enforcement agencies have tried to maintain in dealing with anti-vaccine, anti-mask and anti-lockdown protesters in the middle of the pandemic. LAPD was criticized last month for failing to arrest anyone from a group of mask-less protesters who barged into the Century City mall and a nearby grocery store, where they berated shoppers and refused to leave when asked by staff members.

In subsequent days, LAPD showed up outside the mall to tell protesters they had to don masks before entering, or would face arrest.

In the same police commission meeting, several people in support of the Dodger Stadium protest called in to berate Moore and Decker. One spouted vaccine conspiracy theories. Another claimed, without merit, that the county’s mask mandate was unconstitutional.

In a statement, L.A. County Supervisor Hilda Solis said the protests “upset and disheartened” her. She noted those in line for vaccines on Saturday also had rights.