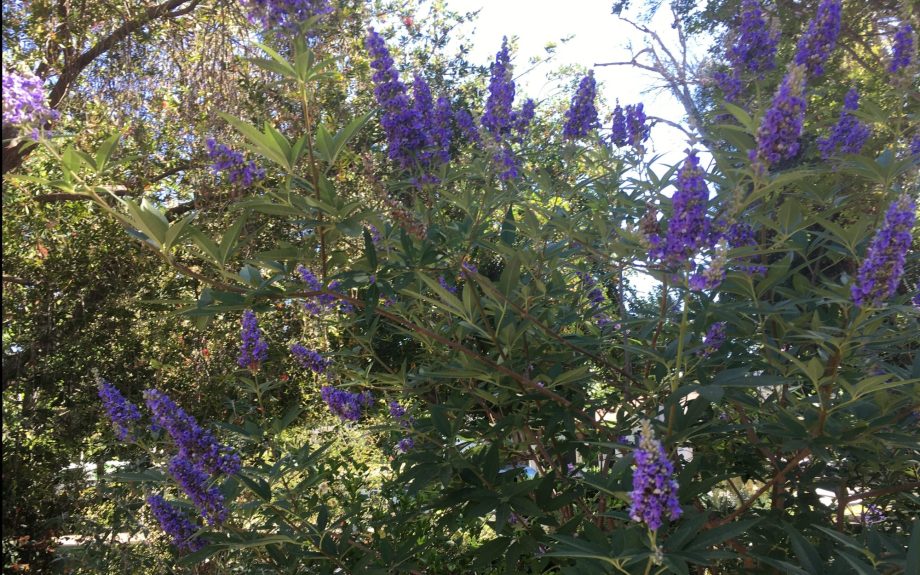 Nearly two decades ago, I planted a ‘Mystery’ gardenia. Today it is over six feet tall and currently covered with fragrant white blooms that reach up to five inches across when fully open.

I have been thinking about this gardenia — which needs no more water than my California lilac (ceanothus) — as the local drought conditions intensify. Also blooming now are my six-foot-tall chaste tree (Vitex agnus-castus) with magnificent purple, spire-shaped inflorescences. It’s on a similarly sparse water regime, as is a tall butterfly bush (Buddleia sp.), with its enormous flower wands. And there is a neighbor of mine with several eight-foot-tall hibiscus shrubs that I know are barely watered and yet have never had more flowers than they have right now. It is apparent that once a woody plant reaches its mature height, or even earlier, it may as well be a native for all the water it requires.

By the same token, all plants, including natives, may be in danger of dying if a drought should persist. For instance, during the 2011-2017 drought, over 100 million trees died in California. You would have thought those in charge of the state’s water supply would have woken up by now to the fact that additional water resources need to be secured. It would make sense, for example, to invest in more water desalination and water recycling projects.

I should mention that for the first decade of life in my front yard, the aforementioned gardenia barely bloomed. Yet, as I have learned with the passage of time, plants are a lot like children. If you can manage to keep them alive for a sufficient number of years, they will eventually find their way, fitting comfortably, if somewhat expensively for their parents, into the category of late bloomers.

My gardenia specimen, a Gardenia augusta variety, had been grafted onto a Gardenia thunbergiana rootstock. The reason for this is that the latter species is not as needy as far as its requirement for iron is concerned and passes this characteristic along to the scion grafted upon it. When Gardenia augusta is planted on its own roots, it frequently shows signs of iron deficiency – that is, leaves are yellow except for their veins, which are green. This is most noticeable on new leaves since any available iron will tend to sequester in the older leaves. Since iron lacks mobility, it is unable to join the flow of water and minerals that is constantly moving up the plant from roots to leaves. It is also noteworthy that the thunbergiana species is native to South Africa and relatively drought tolerant, and lends this quality as well to the augusta species it supports.

Although sensitive to too much sun, gardenias are definitely not shade-loving plants and do best growing in either full morning sun or partial afternoon sun. The healthiest gardenias I ever saw were growing on the east side of a car wash in Van Nuys. A steady mist coming from the car wash provided the ideal atmospheric ambience for the gardenias luxuriating there. Of every ten gardenias, I see in local gardens, at least nine look sad. Leaves are yellow or burnt, growth is spindly, and the plant as a whole looks ready for the compost heap.

Whenever I have trouble growing a plant, I learn about its habitat. If I can get to know its natural environment, I can attempt to duplicate that environment in my own garden. Gardenias, indigenous to southeastern China, tropical Africa, and Oceania, are native to soil that is acidic due to heavy rainfall that leaches out alkaline compounds. But Southern California is alkaline so what’s a gardener to do?

You can acidify soil by adding peat moss and gypsum to it during planting, by using fertilizer that is formulated specifically for acid-loving plants, and by continual applications of compost. The breakdown of compost, in releasing humic acid, has an acidifying effect on the soil. Gypsum

Some gardeners are averse to using peat moss since it is a vanishing resource in some areas of harvest so they substitute coir or coconut fiber for it. Coir acidifies soil, if not to the extent that peat moss does, but is equally effective in breaking up hard soil and improving drainage, a vital condition for success with gardenias. Root protection is a key factor in gardenia health.

With a gardenia, the only pruning required is removal of dead stems and trimming back shoots that go outside the natural shape of the plant. Gardenias should be allowed to reach their mature dimensions, five feet tall and six feet wide for ‘Veitchii’, eight feet tall and eight feet wide for ‘Mystery.’ Newly planted gardenias prefer soil that is consistently moist but never overly wet and never dry. Finally, It’s worth mentioning that gardenia flowers floating in shallow glass bowls make an intriguingly aromatic tablescape.

The history of the gardenia in North America is intertwined with the first years of the American republic. Alexander Garden grew up in Aberdeen, Scotland, where he studied medicine and natural history, before voyaging to Charleston, South Carolina, where he took up residence in 1752. In addition to his medical practice, Dr. Garden became an avid plantsman and sent local specimens he discovered back to Europe. It was during this period that the Swedish botanist, Carolus Linnaeus, began to give genus and species names, in Latin, to plants and animals, a system that would become known as binomial nomenclature. When Linnaeus received a plant from China with flowers that smelled like jasmine, he was persuaded to name it after Alexander Garden (Gardenia jasminoides) for his work in bringing wider recognition to plants from America. Linnaeus sent a sample of the sweet-smelling newly named Gardenia shrub to Dr. Garden, who promptly planted it in his garden where, serendipitously, South Carolina’s semi-tropical climate and acidic soil provided the perfect conditions for the first gardenia ever grown on the American continent.

The chaste tree (Vitex agnus-castus) gets its name from a supposedly anaphrodisiac or desire-suppressing quality. It is a carefree plant that blooms in summer with fragrant flower spires that attract hummingbirds. Vitex comes from a Latin word meaning “to weave” and refers to the fact that its young shoots may be used for basket weaving. Since it flowers on the current season’s growth (in the manner of hibiscus, crape myrtle and hybrid roses) there is no concern about reduced flower production as a result of late pruning.

Arabian lilac (Vitex trifoliata var. purpurea) is an airy, fast-growing woody plant for full or partial sun exposures and is highly drought tolerant. Planted from a five-gallon container, it grows to a height of four feet the first year and eight feet the second. Unpruned, it may grow even taller and be treated as a small tree. Most often, it is used as an informal hedge, in which capacity it is pruned back hard in early spring.

Arabian lilacs do manage to put forth small, pale purple flower spikes in the summer, but these inflorescences are barely noticeable. The Arabian lilac’s main attraction is its leaves. They are green on top, purple underneath, fragrant and velvety to the touch. Native to Australia, Arabian lilacs tolerate a freeze and grow in soil with imperfect drainage.

Tip of the Week: Outside a mall entrance on Topanga Canyon Boulevard in Woodland Hills, I saw a large and captivating planting of desert spoons (Dasylirion wheeleri). Desert spoon is a plant-it-and-forget-about-it symmetrical beauty. Large spherical forms consisting of tough, slender, sharply serrated, yet delicate-looking leaves impart a sense of eerie calm and perfection. With who knows how many years of drought upon us – and even when we get a wet winter, it seems to be followed by consecutive dry ones – we are bound to see more of these desert denizens and their kin throughout Southern California gardens.