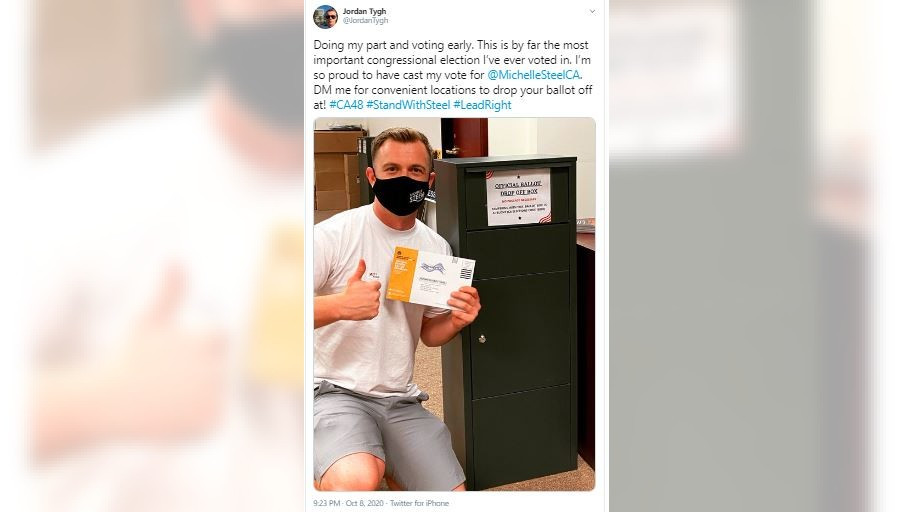 In a photo posted to social media last week, a young man wearing a mask with Orange County congressional candidate Michelle Steel’s name on it is holding a mail ballot and giving a thumbs up next to a box about the size of a file cabinet labeled “Official ballot drop off box.”

The post, from Jordan Tygh, a regional field director for the California Republican Party, encouraged people to message him for “convenient locations” to drop their own ballots.

The problem is the drop box in the photo is not official – and it could be against the law.

Secretary of State Alex Padilla said his office is coordinating with local elections officials to look into the reports.

Only county elections officials can oversee ballot drop boxes, choosing the number, location, hours of operation and other details. County registrars are charged with making sure every box follows strict state guidelines for security, including making sure they can’t be tampered with and tracing the chain of custody of all ballots.

“Operating unofficial ballot drop boxes – especially those misrepresented as official drop boxes – is not just misleading to voters, it’s a violation of state law,” Padilla said, with a felony conviction carrying a prison sentence of two to four years.

Reports came out Saturday night about a metal box in front of Freedom’s Way Baptist Church in Castaic that had a sign matching the one on the Orange County box. The church posted on social media that the box was “approved and brought by the GOP.” The post said church officials don’t have a key to the box and that GOP officials picks up the ballots. A pastor for the church didn’t respond to a request for comment.

On its website, the Fresno County Republican Party also shared a list of “secure” ballot collection locations. None are official county drop box sites, with the local GOP instead listing its own headquarters, multiple gun shops and other local businesses.

The state is still looking into the source or sources of the boxes, Mahood said.

The California Republican Party did not respond to requests for comment about the boxes by deadline. But they’ve been defending the practice in replies on Twitter, alleging the process was made legal under a 2016 law that allows California voters to designate a person to return their ballot for them. The GOP calls the practice “ballot harvesting” and blames it for losses to the Democrats in OC and other places in 2018.

But state officials clarified that using an unauthorized vote-by-mail drop box would not meet the requirements of the 2016 law. No designated “person” would be signing for the ballots as required by state law.

Tygh, who tweeted the Orange County drop box photo on Thursday, didn’t respond to requests for comment. He is listed on Steel’s campaign website as part of “Veterans for Michelle Steel,” a group supporting her election bid. Steel, a Republican supervisor in Orange County, is challenging Rep. Harley Rouda, a Democrat, for the 48th District Congressional seat.

A Democratic party operative retweeted Tygh’s photo on Sunday, alleging the unofficial drop box was at Steel’s campaign headquarters. Reached Sunday evening, Steel said she was out campaigning and was unaware of whether there were drop boxes at her campaign office. She said she’d check into it and call back, but could not be reached later Sunday night.

Orange County Registrar of Voters Neal Kelley said Sunday that hundreds of people alerted him to the possible rogue drop box. Some had also sent the same message to the state Attorney General and FBI.

“What we did was started to look into it, notified the state, and the Secretary of State issued guidance this afternoon that it is illegal and you can’t do that,” Kelley said.

“It would be like me installing a mailbox out on the corner – the post office is the one that installs mailboxes.”

Kelley said he doesn’t have many details, such as where the box in the photo was located or who was responsible for it. He passed the information on to Padilla’s office and to Orange County District Attorney Todd Spitzer.

District Attorney’s spokeswoman Kimberly Edds said Spitzer’s office is investigating, but she declined to say where or how many there were or who had placed them.