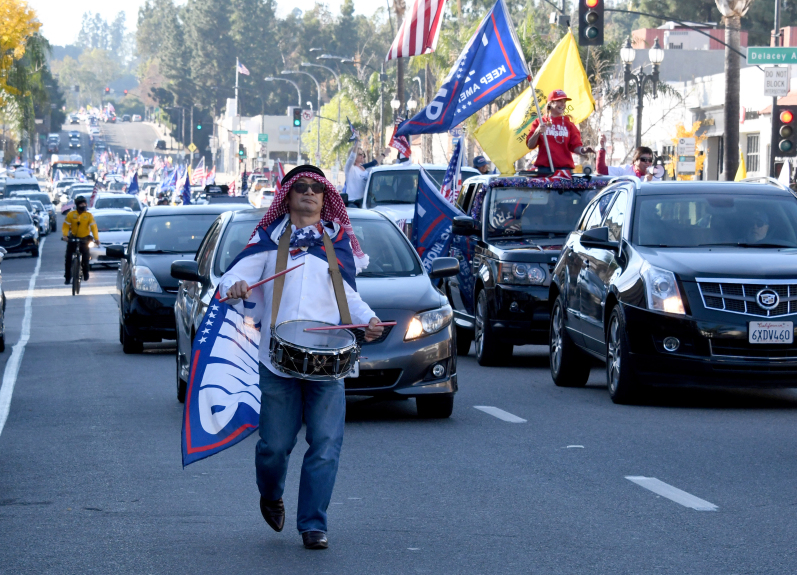 The iconic parade was canceled this year because of the coronavirus pandemic, though a television special aired. The Rose Bowl football game was moved to Texas.

The group began gathering at the empty Rose Bowl parking lot in the shadow of the San Gabriel Mountains between noon and 1 p.m. Participants were dressed in red, white and blue. Some were draped in Trump/Pence flags and many wore Make America Great Again hats. The caravan was dubbed Patriots’ Rose Parade.

Cars, trucks, SUVs and some older military vehicles were decorated with Make America Great Again signs, Old Glory and “Don’t Tread on Me” flags. Some were covered with roses. The group included various ages, from young children to senior citizens. Those in the caravan were honking loudly, playing the national anthem and “Proud to Be an American” by Lee Greenwood.

After 1:30 p.m., the group began moving toward Colorado Boulevard.

Lt. Bill Grisafe, a spokesman for the Pasadena Police Department, said police officers kept an eye on the caravan, which finally broke up near sundown.

“The only issue was the traffic in Old Pasadena,” he said.

The caravan, which stretched over seven blocks, encountered some hecklers and a large group of people who turned out to watch. It continued its route, stopping at red lights and then circling the route that the Rose Parade typically takes.

Some of those who turned out shared their thoughts on why they wanted to start 2021 at the caravan.

“It’s about election integrity and our voices being heard,” said Rhonda Berlinger, who, along with her husband Mark, drove from Santa Clarita to be part of the caravan. Mark Berlinger said the giant display was fueled by skepticism over the results of the November election.

Signs pushing Trump’s message that the election was stolen — despite certification by states and multiple courts rejecting the Trump campaign’s legal challenges — were visible. With that, participants boldly shouted, “Four more years!”

It was a far cry from a relatively serene boulevard just hours before — the street made quiet by a canceled Rose Parade — specifically to stop large crowd gatherings in the wake of the escalating spread of the coronavirus.

Some like Gregg Donovan were there to push for a future Trump presidential run in 2024.

“Mainly, I’m here for the outdoor dining in Southern California; it really hurts businesses,” he said. “The pandemic just shut down everything.”

Others echoed Donovan, calling for a recall of Gov. Gavin Newsom.

By late afternoon, nearly three hours after it started, the procession was still jamming the boulevard, with police keeping an eye on things and the sparsely populated street’s onlookers taking it in. Also taking it in were joggers, cyclists and spectators who saw the large gathering at the Rose Bowl.

“I was just out for a walk; it’s very disturbing,” said Joe Johnson. “My concern is the denial (of the election). They haven’t reconciled themselves to it.”

On his bike, Ivan Nava stopped to take in the caravan, and lamented the nation’s polarized state, even amid a public health crisis.

“It’s not even about politics anymore,” he said. “It’s become about ‘us against them.’”

Earlier this week, Pasadena was the kick-off site for Trump supporters embarking on a nationwide bus tour set to stop in Washington, D.C., on Wednesday, Jan. 6, according to local publication Pasadena Now. The date coincides with other planned pro-Trump demonstrations and the day Congress is expected to count electoral votes from November’s election.

Congress is expected to certify President-elect Joe Biden’s victory officially, but several Republican lawmakers who support Trump have expressed opposition to the action.