The week when Trump tweets as we burn 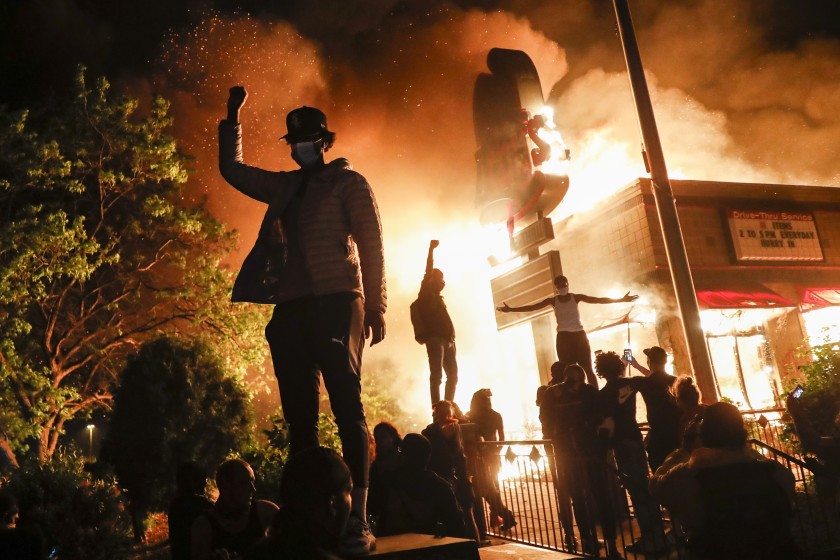 I’ll start by, well, not really starting much at all. At the end of a week in which everything seemed to break (more on that later), columnist LZ Granderson took to our op-ed page and shared with searing honesty what it’s like to experience oppression and write about racism to an audience that increasingly complains about reading it. Enough from me about this; here’s Granderson:

“For those of you who are tired of reading about racism, trust me when I say this — I’m tired of writing about it.

“I’m tired of our humanity slowly being bled out from micro-aggressive encounters slicing at our collective psyche. Social media may give the impression that incidents like the Central Park encounter between avid birdwatcher Christian Cooper and Amy Cooper — the woman who put his life in danger by falsely telling police he was threatening her life — are recent developments, but they are not. It’s just that 14-year-old Emmett Till didn’t have a smartphone back in 1955, when he was lynched after Carolyn Bryant falsely claimed he made a pass at her….

“For those of you who are tired of reading about racism, I’m tired of black and brown bodies being killed by it. I’m tired of watching some white people be more upset by those who are protesting racism as opposed to the racism itself. Being numb is characterizing what happened to [George] Floyd, Cooper, Ahmaud Arbery (who was hunted, shot and killed by two white men while jogging), as unfortunate, disconnected anomalies. Feeling is understanding they are not disconnected at all.”

As for that earlier bit about everything seeming to break this week, this is where President Trump (who else?) comes in. Just as Granderson bristled at those who are tired of hearing about racism, I have to push back against some dissatisfied readers who think that I should find something else besides criticism to offer our president.

I understand the sentiment. Now more than at any other moment over the last three-plus years, I wish I could write glowingly of Trump’s performance or highlight opinion pieces acknowledging the president’s adept crisis management.

But I can’t. The number and intensity of the crises engulfing the United States right now would challenge even the most policy-literate, rhetorically gifted, talented politician to have served as commander in chief. The leader we have now possesses none of those abilities; to the contrary, precisely his worst qualities — those that some of us in the fake news media flagged long ago — are driving his actions right now.

Trump’s authoritarian bent is on display in his executive order targeting Twitter and attacking free speech. His bigotry and bullying tendencies can be detected in his statements threatening violence against the protesters in Minneapolis. His thuggishness and dishonesty prompt bizarre murder accusations and other attacks against his critics. His evident narcissism precludes him from expressing sadness for the 100,000-plus Americans who have died from COVID-19 or from taking even the most basic precaution to protect others from the virus.

This was the week that put on perfect display the utter lack of national leadership that the country desperately needs right now. So, what are the president’s critics failing to see? I’d like to know.

If you’re white, racism is your problem. “Listen, I knowyou are not a racist,” writes columnist Robin Abcarian. You can probably guess what comes next: Though you personally may not be the problem, you’re benefiting from a system that allows you to vote without hassle, pay lower car insurance rates, live just about anywhere you want and suffer far less from the COVID-19 pandemic. The question for white Americans, then, is how can they make things right for black Americans? By voting Trump out of office is a start, Abcarian writes. L.A. Times

Stop focusing on looting in Minneapolis. Be outraged that police keep killing black men. “Police violence does not justify the rampages that erupted in Minneapolis,” notes the L.A. Times Editorial Board. “But as the Rev. Martin Luther King Jr. pointed out more than half a century ago, ‘a riot is the language of the unheard.’ To focus on the damage and looting misses the point. Were it not for the killing of Floyd, and the history of police behavior, there would have been no protests.” L.A. Times

California’s back in court again trying to save the world. It may be discouraging to think of how much effort our state has expended to perform the important tasks of keep our air clean and slowing climate change, but Kerry Cavanaugh sees a silver lining to California’s latest lawsuit against the White House: “The Trump administration’s sloppiness, obfuscation and rush to adopt the rule may have made California Atty. Gen. Xavier Becerra’s job a lot easier.” L.A. Times

Zoom isn’t amusing anymore. We had fun with whimsical backgrounds, unflattering camera angles and jokes about not wearing pants when using the online conferencing tool became compulsory for people working at home in March, but the charm has finally worn off. But it isn’t Zoom’s fault, writes columnist Nick Goldberg, for it is merely technology. Rather, for all the meeting bombs, online dumpings (called getting “zumped”) and far, far darker things to have happened on Zoom, we have something exceedingly familiar to blame: humanity. L.A. Times

Hawthorne is the center of the universe? American astronauts are about to be launched into space from their own soil for the first time since 2011 atop a rocket built not by the “steely-eyed missile men” of old NASA lore, but by a private company adjacent to Hawthorne’s airport started by billionaire Elon Musk. Ten years ago, when SpaceX was conducting test launches to demonstrate its ability to send a capsule to the International Space Station, no one could have imagined a decade later that the space agency would be willing to strap two of its own astronauts to a SpaceX rocket. The Atlantic