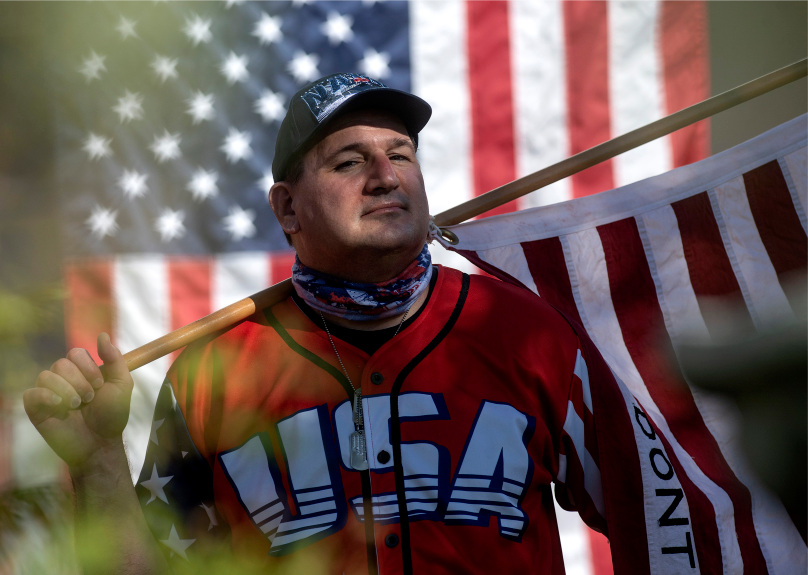 Four years ago this week, Rick Reiss, while visiting his wife’s family in the Philippines, got up at 3 a.m. to watch President Donald Trump’s inauguration.

On Wednesday, Jan. 20, Reiss will be home in Temecula. But instead of watching President-elect Joe Biden’s swearing-in, Reiss might grab his “Don’t Tread on Me” flag and join fellow conservatives at an outdoor rally.

“With what’s happening now, obviously I’m not happy about how things turned out,” he said. “I’m not in a depression though … I’m somewhat sad for our country. … I hope and pray that maybe (Biden) sees the light and he gets some wisdom.”

Biden’s inauguration brings a role reversal for Southern Californians who spent the past four years defending or fighting Trump. If there’s a common thread this time around, it’s unease — conservatives at the thought of Democrats controlling the White House and Congress, liberals at the prospect of more violence after the U.S. Capitol riot and the notion that Trump is a symptom and not the cause of what they’ve seen since 2016.

This inauguration comes against a backdrop of heavy security — 25,000 National Guard troops are in the nation’s capital — and deep division over the legitimacy of Biden’s win, which many Trump supporters reject despite no evidence of widespread voter fraud and court rulings, many from Republican judges, dismissing legal challenges to state election results.

While 60% of Americans overall trust the election’s outcome, 78% of Republicans do not, according to a National Public Radio/PBS NewsHour/Marist poll conducted Jan. 11 to 13.

Melahat Rafiei, an Orange resident, planned to watch the inauguration in person four years ago, when she thought Hillary Clinton would be president. The first Iranian-American elected to the Democratic National Committee, Rafiei said she’d be at Biden’s swearing-in if not for the coronavirus pandemic.

With Biden, “there will be a grown-up in charge,” she said. “You don’t have to worry about an entire group of our citizens — LGBTQ — losing their rights. I don’t think you’ll ever see children put in cages under this administration.”

While she’s relieved that Trump is gone, Rafiei said she’s not “100% relieved … The last five years, all of these racists have come out of the closet … that’s what’s so scary. At least before, they’ve been in hiding.”

The November election showed “it wasn’t just a fluke that President Trump got into office,” said Corey Jackson, political action chair of the Riverside NAACP. “We found out that even more people after seeing what he has done … voted for him than before. That is devastating to those of us who have been victims of this rhetoric.”

April Wilson and her sister, Debbie Barles, both Riverside residents, planned to attend Clinton’s inauguration. When Trump won, they still visited Washington, D.C., but to take part in the 2017 Women’s March along with millions nationwide.

When they got back, Wilson and Barles went door to door in Orange County canvassing for Democratic congressional candidates who joined the 2018 “blue wave” that cost the GOP control of the House of Representatives. Asked if she was hopeful, excited, or nervous about Biden’s presidency, Wilson said: “All of the above.”

“I am hoping for an agenda focused on the environment, health care, reproductive, immigrant and civil rights, economic and criminal justice, and an effort to end white supremacy and gun violence,” Wilson wrote in an email. “My anxiety and fears come from the fact that this will be a monumental task.”

She added she’s also “fear(s) for the lives” of Biden and Vice President-elect Kamala Harris after Trump supporters stormed the Capitol in a riot that left five dead, including a police officer.

“It affirms that women and people of color have everything that it takes to achieve the highest positions and offices not only in this nation but around the world,” said Jackson, who is Black and a Riverside County Board of Education trustee.

Jimmie Woods-Gray eagerly awaits Inauguration Day. But this year she’ll be watching it on TV.

It won’t be like President Barack Obama’s first inauguration in January 2009, when the longtime Los Angeles Democratic community activist got a great seat to watch in person outside the Capitol. It was a biting cold D.C. day she wouldn’t have traded for anything, she remembered.

“If I could just get them to please just send me an official invitation,” Woods-Gray said, hoping for a keepsake to mark the moment; an invitation eventually arrived in the mail.

Woods-Gray has supported Biden from the start, even after poor finishes in Iowa and New Hampshire.

She kept telling the doubters: “If they just give him a chance, he’s gonna come through this. I told people, ‘just give the man a chance. He’s going to win.’”

Biden wasn’t Victor Valladares’ first choice. But the Huntington Beach resident and national delegate for Bernie Sanders said he’s relieved “this whole circus show with this Trump administration … is coming to a close.”

“Democrats, they do listen. But they also don’t have too much of a strong backbone to stand with policies that reflect the needs of their constituents,” said Valladares, who lost his executive role on the Orange County Democratic Party’s central committee last year after he publicly criticized Democrats.

While he doesn’t think Trump won in a landslide, as the soon-to-be-ex-president insists, Reiss said he has his doubts about the election.

“I’m not saying it was stolen. I don’t know,” he said. “That said, we went through a Constitutional process … whether I like it or not, I will agree that come Jan. 20 … (Biden is) going to be sworn in and his title is going to be president of the United States.”

Since Nov. 10, Bill Badgley has had a booth set up in Redlands, with signs proclaiming “Trump Will Triumph.” The Redlands retiree was drawn to Trump because of his positions on Israel, religious liberty, anti-abortion stance and that, prior to being elected, he wasn’t a politician.

“I liked his energy and his thoughts on the current state of our political environment. I’ve seen nothing get done, whether it’s the Republicans or the Democrats,” Badgley said.