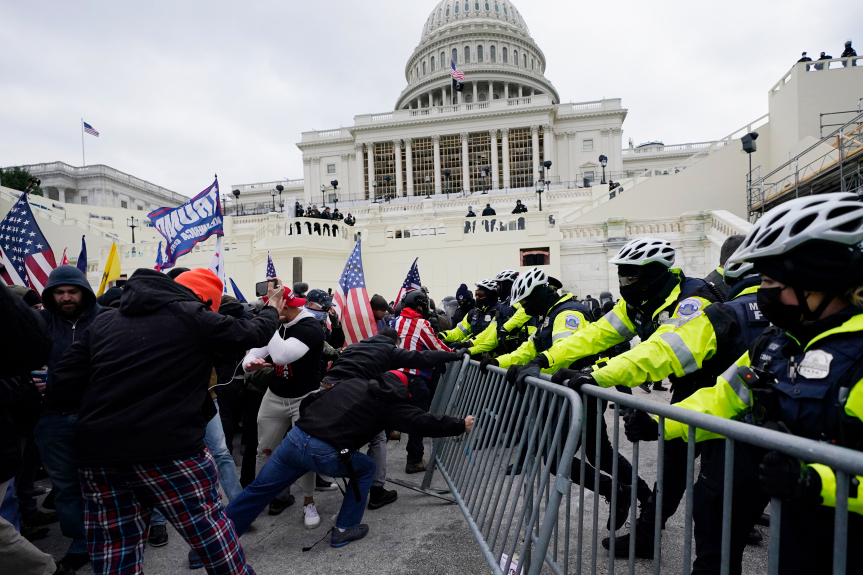 Hours after news outlets around the world showed supporters of President Donald Trump breaking into the United States Capitol as part of an effort to prevent certification of the Nov. 3 election, Inland Empire Assemblyman Chad Mayes said his phone started blowing up.

Constituents, other politicians; many were telling him they planned to switch their voter registration away from the Republican party.

Voter registration data in Orange County, the one Southern California county that tracks registration numbers daily, shows the Republican party lost eight times more voters than it gained after the violence in D.C., with 600 GOP voters lost from Wednesday to Friday. That followed a month in which the party had been gaining ground among O.C. voters.

“Every rational Republican — and I’ve talked to a whole bunch of them — is saying ‘OK, I get it now,’” said Mayes of Rancho Mirage, who was GOP leader of the Assembly before his own switch, in 2018, from the GOP to No Party Preference.

A hundred miles to the west, Los Angeles County activist Randi Berger said she too is “done” with Republicans in the wake of last week’s events — but for a different reason.

Berger, who has organized local pro-Trump rallies since 2016, believes the GOP has simply become part of an establishment that’s trying to quell the voices of millions of people who still stand firmly behind President Trump.

Such contrast is the plight of leaders of Southern California’s fragmented Republican party, who this week were left pondering tough questions even as the dust and tear gas from Wednesday’s insurrection settled.

Is Trump now effectively out of the picture? And, if so, will the party regroup and move on? Or is loyalty to Trump so strong, and the divisions stoked by his tenure so deep, that the political brand is forever changed in his image?

“It will take a major correction to be able to heal the cancer that spread so rapidly within the party,” Mayes said.

The GOP’s struggle Southern California started before Trump and only got worse during his time in office.

Voter registration has shrunk and election victories have become harder to come by as the region becomes more racially, ethnically and economically diverse — and the Republican party continues to support ideas and candidates that aren’t popular with non-white and younger voters. That trajectory is only expected to continue, analysts say, even if various forces lead to temporary GOP gains.

Given that context, Jimmy Camp, a former political director for the California Republican Party who left the GOP over Trump in 2016, sees last week’s events — including Democrats sweeping both Senate runoff races in Georgia — as the “nail in the coffin” for his former party.

But, regionally at least, Republicans insist they had momentum coming out of the November elections.

In three regional congressional contests the GOP candidate beat an incumbent Democrat. And the party scored other victories, such as winning the Inland Empire’s pricey and competitive 23rd State Senate seat.

Many local GOP leaders insist that the violence in D.C. will do nothing to hamper that progress, and they have no plans to change strategy anytime soon.

“We have some pretty darn good Republican representatives in California,” said Jonathan Ingram, a Murrietta councilman and chairman of the Riverside County Republican Party. “The problem is getting people to sit down and talk and resolve issues … We need to sit down and figure out the next steps to heal a country.”

Others, however, suggest that those who don’t see a potential rupture for the GOP in the wake of the party’s link with domestic terrorism aren’t being realistic.

That’s how Mike Madrid, a veteran Republican strategist who co-founded the Lincoln Project to defeat Trump, responded to the notion that Wednesday’s events won’t impact the Republican party.

“This is going to hurt the Republican brand, there’s no question,” Madrid said. “The question is how much, and how lasting, it is going to be.”

Madrid believes the GOP might be hurt most in places like Orange County, where the party regained two seats in November thanks to voters who proved they wanted a check on extremism by splitting their votes for Biden at the top and Republican congress members down ticket.

“There are few things more extreme than an insurrection,” Madrid said.

“Any perception of momentum is gone. They are now the party of insurrection.”

It’s not yet clear whether Trump, who is unpopular with a majority of Southern Californians, will remain a political force.

As soon as Monday the House of Representatives is expected to file a second impeachment proceeding against Trump, and some GOP senators have suggested they would be willing to consider a trial in that body. Even if Trump serves out his term, which ends Jan. 20, a cloud might follow.

Repeatedly, Trump’s reputation with his core voters has held firm even after pundits and media critics and moderate politicians have said he should be shunned. And even after the mob scene at the Capitol — which Trump urged on — supporters late last week were pushing for Trump or one of his children to run for president in 2024.

But Barbara Shell Stone, a Republican who’s a former political science professor at Cal State Fullerton — and daughter of a GOP gubernatorial candidate — is one who believes the Capitol riots will end any such plans. She thinks the insurrection also will hurt Trump’s ability to play “king maker,” and that it will hurt Sen. Ted Cruz and others hoping to win over his base in future national elections.

Other Republicans argue that while Trump was a huge force, and a “personality” that propelled the GOP, the party itself transcends any one person.

“Donald Trump is not the Republican Party,” said Richard Sherman, chairman of the Los Angeles County GOP, who said Trump’s performance on Wednesday could not be justified.

“Donald Trump became a Republican. But the party is going to go on.”

But if Trump’s power is shaky, what does it mean that hours after the insurrection a majority of Republicans in the House cast votes to nullify the Nov. 3 election results in Arizona and Pennsylvania, to substitute their preference over the will of American voters — exactly the result the mob was seeking?

In Southern California, Rep. Young Kim, R-La Habra, was the only local Republican who voted to let the Electoral College results stand. Reps. Ken Calvert of Corona, Mike Garcia of Santa Clarita, Darrell Issa of El Cajon and Jay Obernolte of Big Bear Lake were among the 138 House Republicans who voted to nullify American voters in at least one of the two states.

Garcia, who was just elected in L.A. County’s swing 25th Congressional District, said allegations of election “irregularities” — which have been debunked in no fewer than 60 lawsuits — were enough to get his objection. By the morning of Thursday, Jan. 7, he said the objections had run their due course and acknowledged Joe Biden as the lawfully elected president.

Camp says those House votes were prompted by fear. Even with Trump on his way out, Camp believes many Republicans believe they will lose reelection in two years if they anger the 30% or so of the Republican base who remain fiercely loyal to the president. That fear, Camp added, isn’t going away anytime soon.

But there are non-Trump voters in the GOP. And, given the makeup of their districts, Garcia and Calvert in particular could take hits in the 2022 election over their votes on the election results, predicts Marcia Godwin, a political science professor at University of La Verne.

“That cloud over them in their reelection, that is something we are going to use,” said Mark Gonzalez, president of the L.A. Democratic Party.

Those who’ve left the GOP said they’d love to see it become a party they can again support. But Mayes, Madrid and Camp don’t see that happening soon. And they’re not sure what comes next.

“We haven’t seen an orchestrated act of sedition, or insurrection, so we can’t say with certainty” what will follow, Madrid said. “Does this harbinge a split in the party? Or does it accelerate a devolution into a more relegated, less effective Republican party?”

Mayes said the moment he decided to leave the Republican party came two years ago, when he learned the result of a poll he’d conducted about how voters in his district would respond to a candidate who opposed White nationalists. Though he said the poll found such opposition would win him voters among Democrats and independents, it showed him losing Republicans.

He said he saw that exact sentiment again on Wednesday, as Trump supporters roamed through the Capitol building carrying Confederate flags.

“To me it’s the Trumplican party now,” Camp said. He added that he wouldn’t rejoin the party unless everybody “involved with Donald Trump” was “flushed down the toilet.”

Given how unlikely that seems, Mayes said longstanding talks about forming a third political party have picked up new steam in recent days.

Such a split is possible, Camp says, with some Republicans, many independents and some Democrats dissatisfied with their current options. But the logistics of making such a party viable, he said, would take at least a decade. And many other experts believe a third-party idea isn’t happening at all because the two-party system is too ingrained in American politics.

“It’s amazing how the two-party system has always survived,” he said. “It’s not pretty, but it morphs to adapt to the views of people.”

While Berry foresees “short-term schisms, as people jockey for recognition in office,” he believes the GOP will remain intact.

“The party morphs. It changes,” he said. ” I’m a conservative. I’m not thrilled with a lot of what the California Republican Party is doing, but it’s our only real hope for changing this state.”

In the meantime, Mayes is encouraging more GOP leaders to follow his example and change their party affiliation to No Party Preference.

“You can still be a conservative, but drop your registration,” he said. “That will send a message.”