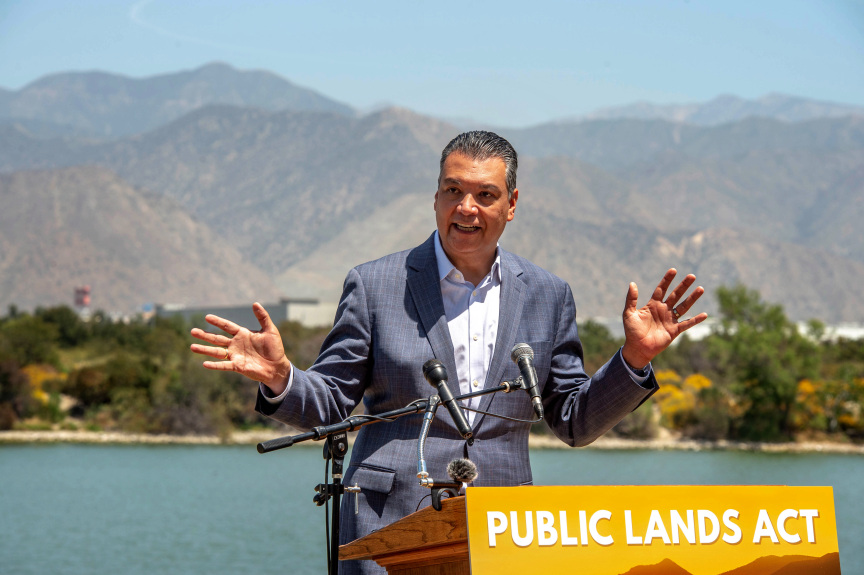 U.S. Sen. Alex Padilla introduced legislation Monday, May 3, that would protect and improve access to 1 million acres of land and 500 miles of rivers across the state, including more than 139,000 acres and 45 miles of wild and scenic rivers in Southern California.

Padilla, the newly installed senator, filling the seat previously held by Vice President Kamala Harris, is championing his first environmental bill that is similar to a larger conservation bill passed by the House of Representatives on Feb. 26. Padilla, who is optimistic his bill will be adopted by the Senate, said it addresses the urgent need for recreation that has grown exponentially during the coronavirus pandemic, especially for park-poor communities.

“California public lands are exactly that: They belong to the public. Too many children, especially those of color, live in nature-deprived communities. In fact, Los Angeles County has one of the lowest rates of park access,” said Padilla, speaking Monday with the San Gabriel Mountains behind him.

Padilla’s bill incorporates the San Gabriel Mountains Foothills and Rivers Protection Act, authored by Rep. Judy Chu, D-Pasadena. Under this provision, the San Gabriel Mountains National Monument established by President Barack Obama in 2014 will be expanded by 109,143 acres, going from 346,177 acres to 455,320 acres, to include front-facing portions of the Angeles National Forest located north of Pasadena, Sierra Madre and Arcadia and into the forest’s western edge near Santa Clarita.

For the past several years, that effort was stalled and the monument threatened with elimination, said Los Angeles County Supervisor Hilda Solis.

“There was an attempt to undo that under the Trump administration. We couldn’t let that be taken away,” Solis said, noting that 82% of communities of color in L.A. County lack green space. The Angeles forest is visited by 10 million people a year, and it makes up 70% of the county’s open space.

In addition, Chu’s act would add 31,069 acres of wilderness, including an expansion of Sheep Mountain Wilderness near Wrightwood to help the threatened breed, and 8,417 acres of the western Angeles National Forest near Ventura County as a wilderness area to protect the California condor. Also in the Angeles, the 45.5 miles of wild and scenic rivers would include the East Fork of the San Gabriel River where the endangered Santa Ana sucker fish are struggling to survive.

Also, Chu’s provision creates a 51,107-acre San Gabriel Mountains National Recreation Area, or NRA, a swath of non-forest land that hugs the San Gabriel and Rio Hondo rivers from the mountains through Baldwin Park and El Monte into the Whittier Narrows Recreation Area, then running east-west parallel to the 60 Freeway along the Puente-Chino Hills.

The recreation area designation would be similar to the governance in the Santa Monica Mountains surrounding Los Angeles and the San Fernando Valley. An extension of that area, known as The Rim of the Valley Corridor Preservation Act, authored by Rep. Adam Schiff, D-Burbank, was not included in Padilla’s bill. That is expected to be taken up separately by U.S. Sen. Dianne Feinstein at a later date.

Under the San Gabriel Mountains NRA, a planning blueprint would be drawn up and eventually, rangers from the U.S. National Park Service would provide tours and interpretive services.

The biggest change would be a north-south leg from the foothills of cities such as Glendora, San Dimas, La Verne and Pomona along the urbanized San Gabriel and Rio Hondo rivers.

“The area would connect the San Gabriel Mountains to the Puente-Chino Hills wildlife corridor,” Monson explained.

A connection to the two rivers and to what planners call The Emerald Necklace, a 17-mile loop of waterways and parks — would be a first.

“By authorizing the National Park Service to engage in this partnership management, it weaves the urban fabric into the natural areas, making the San Gabriel River the same way people are thinking about the L.A. River,” said Daniel Rossman, California deputy director of The Wilderness Society, a national environmental group.

Looking at the bigger picture, Crowfoot said if the Senate bill is passed and signed by President Joe Biden, it would “kick-start” state and national goals to protect 30% of the lands and natural waterways by 2030.

Padilla said by preserving lands, it would promote tree and habitat restoration, capturing greenhouse gases that contribute to climate change and extreme fires.

In two other parts of the state, the Senate bill would:

• Protect 245,000 acres of wilderness in the Central Coast and designate a 400-mile trail, the Condor National Scenic Trail, connecting the northern and southern parts of the Los Padres National Forest by a single hiking route.

• Protect about 317,000 acres of public lands as wilderness in Del Norte, Humboldt, Mendocino and Trinity counties.