Revamped child tax credit is coming your way, Southern California. Here’s why – and how it will work 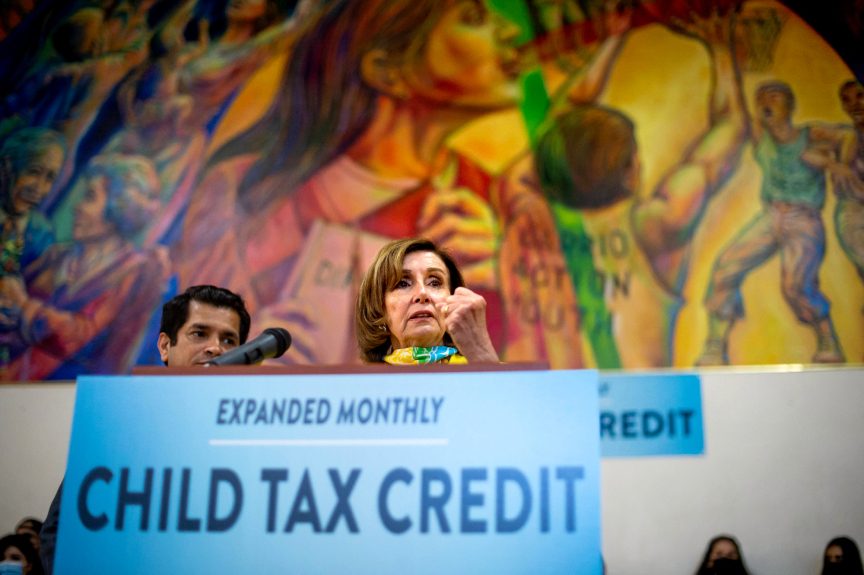 Gaby Hernandez-Gonzalez, mother of three, is fed up with $2,000-plus rents and gas prices climbing to nearly $5 per gallon in Southern California. She had to get a second job, costing her precious time with her children.

Amid the crushing economic and human toll of the pandemic, the cost of living in her Los Angeles County hometown of El Sereno — or pretty much anywhere from the Inland Empire to Orange County  — just keeps going up, and the quality of life is going in the opposite direction.

“People like me have to take on two jobs to make ends meet,” she said Thursday, July 15. It’s the same day relief started showing up in bank accounts here and across the nation in the form of an expanded child tax credit.

“We’re not unemployed,” she said. “It’s just we’re not able to make ends meet. What the the child tax credit does for me is I’m able to not work the weekends any more on my second job.”

Voices like Hernandez-Gonzalez’s caught the attention of House Speaker Nancy Pelosi, D-San Francisco, and a trio of Los Angeles County congressional Democrats who descended on this working class L.A. County neighborhood on Thursday. They celebrated what they called a “transformative” expansion of the nation’s child tax credit, which began landing in families’ bank accounts this week.

The lawmakers also argued the funds should become permanent.

The tax credit — its earlier incarnations long critiqued as never really living up to expectations — is being hailed by Democrats as a landmark program, akin to Social Security, aiming to bring millions of children out of poverty. Republicans have panned it as discouraging parents from entering the job market — as well as promoting a cycle of poverty in America.

Some 15 million households across the country will now receive the full credit. The monthly payments amount to $300 for each child in a household 5 and younger and $250 for those between 5 and 17. The payments are set to lapse after a year, but in L.A. County on Thursday, Pelosi, Bass, Gomez and Chu echoed President Joe Biden in a call to extend the funding through at least 2025.

Pelosi called the credits a “economic and moral imperative,” arriving on the heels of the economically crippling pandemic.

In Southern California, such expanded credits long been called for by local advocates in communities populated by families who, like Hernandez-Gonzalez, find themselves forced to work multiple jobs just to put food on the table.

The credits will provide families with payments throughout the year, aimed at supporting costs for sustenance, childcare, healthcare and other essentials, officials said.

In L.A. County alone, officials said, the credits will benefit at least:

The child credit is not new. It began in 1997 as a tax cut, but eventually become an anti-poverty program. But many, including community advocates, said its promise was never fully realized for children because their parents earned too little to benefit from it.

Former President Donald Trump’s 2017 tax bill — hailed by his boosters as among his top domestic landmarks — doubled the maximum credit while expanding it to families that earned as much as $400,000 a year.

But children with the greatest economic needs were least likely to benefit, according to a study out of Columbia University’s Center on Poverty & Social Policy, which in 2019 called for more equitable, fully-refundable Child Tax Credit, not tied to household earnings. According to the nonpartisan Center on Budget and Policy Priorities, the credit could lift an estimated 4.1 million children out of poverty.

The rules now require the IRS to provide a monthly benefit, so that families in the IRS database can begin collecting now.

Chu said collecting the benefit will not affect current government benefits such as SNAP, Medicaid, SSI and other public distributions.

“I will not rest until this child tax cut is permanent,” Chu said.

While polling has revealed the proposal to be popular, Republicans from the beginning slammed it, even in its nascent stages.

Back in February, Sens. Marco Rubio, R-Florida, and Mike Lee, R-Utah, said they could get behind tax relief for lower-income families, but only if they are employed or are incentivized to work.

“We do not support turning the Child Tax Credit into what has been called a ‘child allowance,’ paid out as a universal basic income to all parents,” the two said in a joint statement at the time. “That is not tax relief for working parents; it is welfare assistance.”

Pelosi on Thursday abruptly took issue with the idea that the credits, as approved, encourage laziness, or discourage responsibility.

“This is taking us into a new era,” she said. “The strongest weapon in that  fight is that it works, and that people truly avail themselves, and…  in fact see themselves as freed up because they can afford what is needed in child care, health care and all the rest. I think it’s very liberating.”

That liberation gives people — in particular, women — the freedom to actually work, she said, without having to worry about how they will pay for child care while at work.

“Let’s be respectful of some of the concerns that businesses put forth, but let’s not paint everybody with a broad brush,” she said.

“It’s kind of a catch, you can’t go back because you don’t have the money to take care of your kids, or get transportation to go to work. It’s like well, what do you want us to do…. we need help,” she said.

HOW THE CHILD TAX CREDITS WORK, COURTESY OF THE ASSOCIATION PRESS

HOW BIG ARE THE CREDITS?

The credit is $3,600 annually for children under age 6 and $3,000 for children ages 6 to 17. But six months of payments will be advanced on a monthly basis through the end of the year. This means eligible families will receive $300 monthly for each child under 6 and $250 per child older than that.  This is a change from last year, when the credit totaled $2,000 per child. Families who did not owe the government income taxes were also unable to claim the credit, a restriction that Biden and Congress lifted.

ARE THERE LIMITS ON WHO CAN QUALIFY?

HOW CAN YOU APPLY?

If you filed taxes and the IRS already has your bank account information, the payments should be deposited directly into your account on the 15th of each month. The Treasury Department estimates that 35.2 million families will receive payments in July. If you didn’t file taxes in 2019 or 2020, you might still be eligible for the credit and can apply here: https://www.irs.gov/credits-deductions/child-tax-credit-non-filer-sign-up-tool.

WHY ARE THE PAYMENTS MONTHLY?

Advocates say the monthly payments can help smooth out an impoverished family’s income, making it easier for them to budget and less dependent on high-interest lenders.

CAN THE MONTHLY PAYMENTS BE STOPPED?

Yes. Some people are used to the child tax credit enabling them to get a refund on their taxes. They might not want the monthly advance and about 1 million people have opted out, according to administration officials. People can unenroll here: https://www.irs.gov/credits-deductions/child-tax-credit-update-portal.