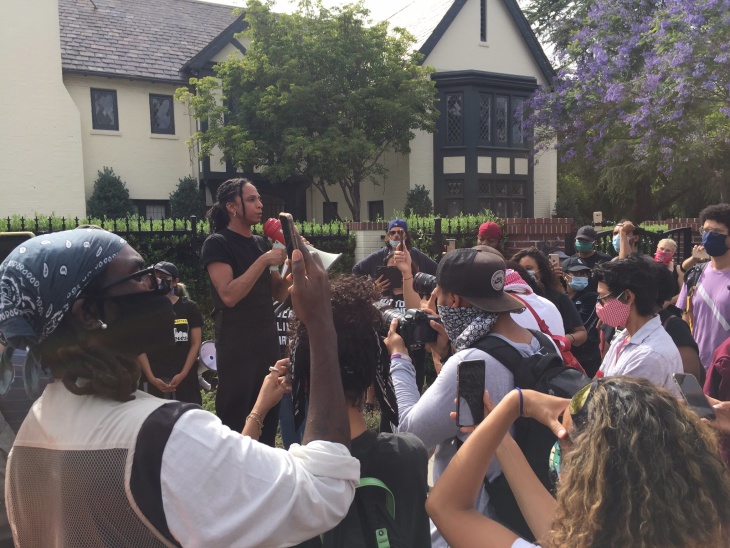 One person was arrested as police and protesters clashed on the 13th consecutive day of demonstrations outside Los Angeles Mayor Eric Garcetti’s official residence, held in an attempt to prevent President-elect Joe Biden from appointing Garcetti to his cabinet.

At about 10:30 a.m., while officers were in “crowd management mode,” a person began using a bullhorn, which is not allowed by the city’s municipal code within 500 feet of residential zones, LAPD Officer Melissa Podany said. The sound it generated traveled more than 200 feet and prompted a noise complaint.

“Four officers attempted to make an arrest for the above violations, when the crowd moved in on the officers, punching and kicking them, which resulted in an ‘officer needs help’ call,” she said. “At that time, an unlawful assembly was declared.”

At least one person could be seen on the ground beneath a dogpile of protesters trying to shove police away in footage recorded Sunday. An officer was also seen swinging a baton and striking several people before demonstrators start to back off.

The person with the bullhorn who prompted the initial noise complaint ran away, while a woman wearing a red backpack and neon yellow vest was arrested on suspicion of taking a person from the lawful custody of peace officer by means of a riot.

In another video of the incident the arrested woman tells police she was trying to stop people from “crushing” an older man as she is taken into custody. She also identifies herself as an elected official representing sub-division 3 of the Wilshire Center Koreatown Neighborhood Council.

Self-described democratic socialist Jamie Penn was elected to that position in November. She had announced plans to attend the event on social media, and later confirmed that she had been released from custody in a Tweet posted at 3:54 p.m.

Two officers were treated for minor injuries and released at the scene of the incident, Podany said. Police were unable to confirm if any protesters were hurt Sunday.

Black Lives Matter-Los Angeles and Ground Game LA have vowed to conduct a demonstration every day until Biden commits to not appointing Garcetti to the cabinet. They are critical of Garcetti’s handling of homelessness, public transportation and other issues.

Garcetti has repeatedly said he has not sought a position with the incoming Biden administration.