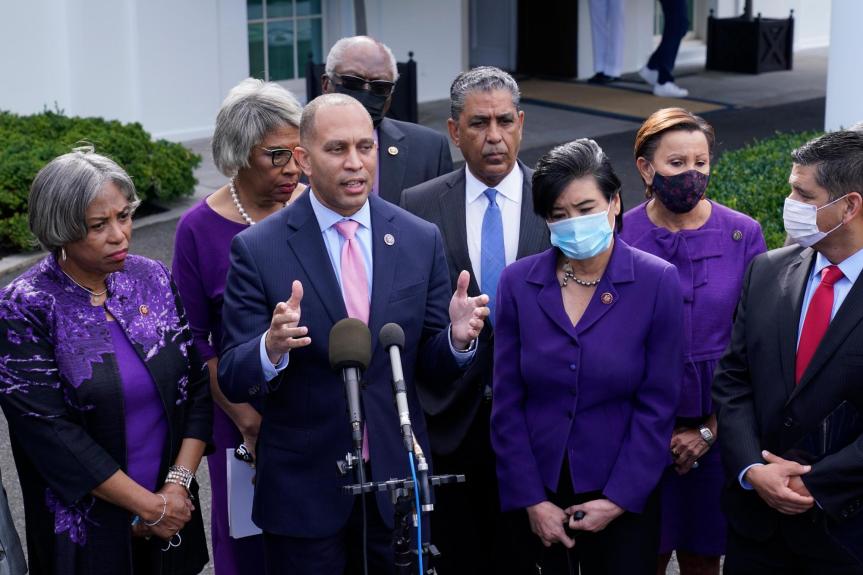 House Speaker Nancy Pelosi told colleagues Wednesday that Democrats are in “pretty good shape” on President Joe Biden’s sweeping domestic plan and a related $1 trillion infrastructure bill as they race to wrap up talks ahead of his departure for global summits.

Her upbeat comments came as Biden and Democrats try to strike agreement soon on his big proposal, now about $1.75 trillion in social services and climate change programs, in part to show foreign leaders the U.S. is getting things done under his still-new administration.

But Manchin hit the brakes, panning the Democrats’ proposed new billionaires’ tax, saying he didn’t like the idea of “targeting” the wealthy. Still, he said it’s time to move forward on a framework for Biden’s plan.

“People in the stratosphere, rather than trying to penalize, we ought to be pleased that this country is able to produce the wealth,” Manchin told reporters ahead of the meeting.

Manchin said he prefers a minimum 15% flat “patriotic tax” to ensure the wealthiest Americans don’t skip out on paying any taxes. “There’s a patriotic duty that you should be paying something to this great country,” he said.

The quickening pace of negotiations came as Senate Democrats pushed past skeptics Wednesday and unveiled a new billionaires’ tax proposal, designed to help pay for the package and edge his party closer to an overall agreement.

There’s a Sunday deadline to approve the smaller, bipartisan roads-and-bridges infrastructure bill or risk allowing funds for routine transportation programs to expire. But that $1 trillion bill has been held up by progressive lawmakers who are refusing to give their support without the bigger Biden deal.

Pelosi told colleagues she would communicate later in the day on developments, according to another person who requested anonymity to discuss the speaker’s private remarks at a meeting of House Democrats.

“That will determine, our timetable, our course of action but we are in pretty good shape,” she said.

“An agreement is within arm’s length,” said Schumer, D-N.Y. “We are hopeful that we can come to a framework agreement by the end of today.”

Pelosi reiterated that in order for the House to pass the bipartisan infrastructure bill, Democrats need to have “the trust, the confidence and the reality” in Biden’s broader package.

One part of that plan is coming into focus: The unveiling of the billionaires tax Wednesday could help resolve the revenue side of the equation as Democrats try to settle on a tax strategy.

The proposed new tax would hit the gains of those with more than $1 billion in assets or incomes of more than $100 million a year, and it could begin to shore up the big social services and climate change plan.

The new billionaires’ proposal, coupled with a new 15% corporate minimum tax, would provide alternative revenue sources that Biden needs to win over Sinema, who had rejected the party’s earlier idea of reversing Trump-era tax breaks on corporations and the wealthy to raise revenue.

Biden met late Tuesday evening with Sinema and Manchin at the White House.

The three made progress on the plans, according to statement from a White House official.

“No senator wants to stand up and say, ‘Gee, I think it’s just fine for billionaires to pay little or no taxes for years on end,’” said Democratic Sen. Ron Wyden of Oregon, chairman of the Senate Finance Committee, helming the new effort.

Biden and his party are zeroing in on at least $1.75 trillion in health care, child care and climate change programs, scaling back what had been a $3.5 trillion plan, as they try to wrap up negotiations this week.

Taken together, the new tax on billionaires and the 15% corporate minimum tax are designed to fulfill Biden’s desire for the wealthy and big business to pay their “fair share.” They also fit his promise that no new taxes hit those earning less than $400,000 a year, or $450,000 for couples. Biden wants his package fully paid for without piling on debt.

While the new tax proposals have appeared agreeable to Manchin and could win over Sinema, whose support is needed in the 50-50 split Senate where Biden has no votes to spare, the idea of the billionaires’ tax has run into criticism from other Democrats as cumbersome or worse.

Rep. Richard Neal, D-Mass., the chairman of the Ways and Means Committee, said he told Wyden the billionaires’ tax may be more difficult to implement than the route his panel took in simply raising rates on corporations and the wealthy.

Under Wyden’s emerging plan, the billionaires’ tax would hit the wealthiest of Americans, fewer than 800 people, starting in the 2022 tax year.

It would require those with assets of more than $1 billion, or three consecutive years of income of $100 million, to pay taxes on the gains of stocks and other tradeable assets, rather than waiting until holdings are sold.

A similar billionaires’ tax would be applied to non-tradeable assets, including real estate, but it would be deferred with the tax not assessed until the asset was sold, though interest would have to be paid.

Overall, the billionaires’ tax rate would align with the capital gains rate, now 23.8%. Democrats have said it could raise $200 billion in revenue that could help fund Biden’s package over 10 years.

“I’ve been talking about this for years,” said Sen. Elizabeth Warren, D-Mass., who campaigned for the presidency on a wealth tax, and backs Wyden’s approach. “I’ve even made billionaires cry over this.”

Republicans have derided the billionaires’ tax as “harebrained,” and some have suggested it would face a legal challenge.

And key fellow Democrats were also raising concerns about the billionaires’ tax, saying the idea of simply undoing the 2017 tax cuts by hiking top rates was more straightforward and transparent.

Under the House bill approved by Neal’s panel, the top individual income tax rate would rise from 37% to 39.6%, on those earning more than $400,000 a year, or $450,000 for couples. The corporate rate would increase from 21% to 26.5%. The bill also proposes a 3% surtax on the wealthiest Americans with adjusted income beyond $5 million a year.

With Sinema rejecting the House’s approach to taxes and Manchin panning the new spending on programs, the senators have packed a one-two punch, throwing Biden’s overall plan into flux.

That was also forcing difficult reductions, if not the outright elimination, of policy priorities — from paid family leave to child care to dental, vision and hearing aid benefits for seniors.

The once hefty climate change strategies are losing some punch, too, focusing away from punitive measures on polluters that raised objections from coal-state Manchin, in a shift toward instead rewarding clean energy incentives.

Manchin’s resistance may scuttle one other tax idea — a plan to give the IRS more resources to go after tax scofflaws. He said he told Biden during their weekend meeting at the president’s home in Delaware that that plan was “messed up” and would allow the government to monitor bank accounts.