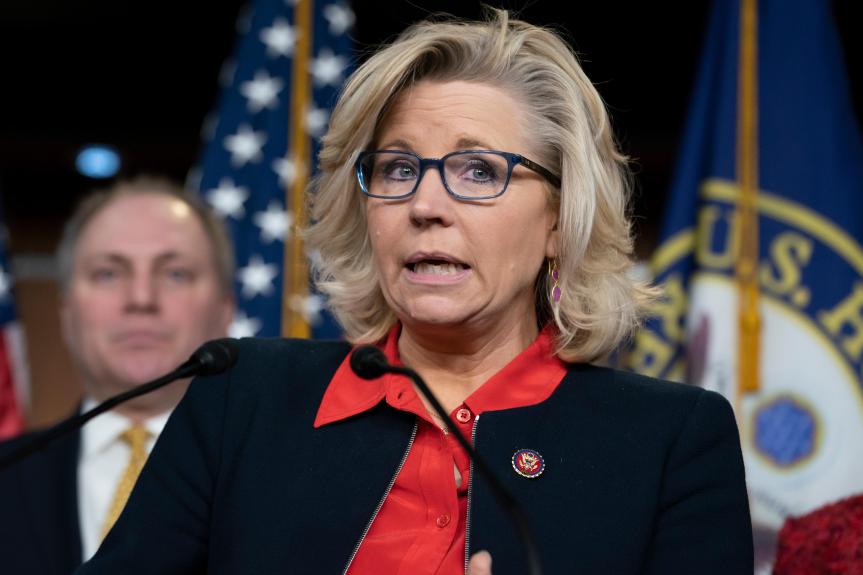 The No. 2 House Republican publicly called Wednesday for the removal of Rep. Liz Cheney from the party’s leadership, adding momentum to the drive to topple her after she clashed repeatedly with former President Donald Trump.

Rep. Steve Scalise, the House GOP whip, is backing New York GOP Rep. Elise Stefanik for Cheney’s post, said Scalise spokesperson Lauren Fine. The public statement from the Louisiana Republican was the first explicit call from GOP leadership for the ouster of Cheney from the party’s No. 3 leadership job.

In yet another powerful blow against Cheney, Trump will soon endorse Stefanik to replace her, said a person familiar with the former president’s plans who was granted anonymity to discuss them. Trump issued a fresh statement Wednesday lambasting Cheney for “unknowingly and foolishly” rejecting his insistence that he lost the 2020 election due to fraud, which is false.

“House Republicans need to be solely focused on taking back the House in 2022 and fighting against Speaker Pelosi and President Biden’s radical socialist agenda, and Elise Stefanik is strongly committed to doing that, which is why Whip Scalise has pledged to support her for Conference Chair,” Fine said.

House Minority Leader Kevin McCarthy, R-Calif., said Tuesday that rank-and-file Republicans were concerned about Cheney’s “ability to carry out her job” as a result of her public comments about Trump.

Without support from McCarthy and Scalise, Cheney’s political future in the House appears increasingly slim. A vote on replacing her could come next week.

Stefanik, just 36 and in her fourth House term, has been one of Trump’s staunchest supporters in Congress, particularly among women. Several Republicans mentioned Stefanik on Tuesday as among several contenders for the post, but Scalise’s overt endorsement makes her a favorite for the post.

Cheney is the highest-ranking woman in the GOP leadership. Removing her without replacing her with another woman could be politically damaging for a party seeking to bolster its weak appeal among women voters.

There are just 31 Republican women in the House, about one-third of Democrats’ total but up from the 13 who served in the last Congress.

What could be seen as a skirmish between minority party leaders trying to find a way back to the majority has become a more politically profound moment for Republicans and the country. The party of Abraham Lincoln is deciding whether to let Trump’s false claims about the election of Democrat Joe Biden go unchecked — or to hold him accountable, as Cheney does, by arguing the country cannot “whitewash” the former president’s role in the deadly Jan. 6 attack on the Capitol.

The standoff has been intensifying ever since Cheney led a group of 10 House Republicans voting with Democrats to impeach Trump on a charge of incitement of insurrection over the Jan. 6 siege, the worst domestic mob attack on the Capitol in the nation’s history.

Not only was her effort an affront to Trump, still president at the time, but it was out of step with most House Republicans, including the 138 who voted against certifying the Electoral College vote for Biden’s victory. However, others, including Rep. Adam Kinzinger, R-Ill., who voted to impeach Trump, see Cheney as the “truth-telling” GOP leader the nation needs.

Some fellow Republicans tried to oust her from her leadership position, but they failed in February in a secret party ballot, 145-61, in part because McCarthy urged his troops to remain unified against Democrats.

But the divisions have now widened into a fight for the party’s future as it navigates a post-Trump world.

McCarthy, who would be in line for the speaker’s gavel if the GOP wins House control, wants to keep Trump voters active in the party and attract new supporters. He believes this is accomplished by keeping Trump engaged, dashing down to the former president’s private club in Florida for support and drawing on his connection with the man who referred to him as “My Kevin.”

Cheney takes the opposite approach, arguing the GOP must rid itself of Trump’s brand of politics with its nationalist, authoritarian overtones if it hopes to return to its conservative roots and attract the voters who fled the party for Biden.

“We can’t embrace the notion the election is stolen. It’s a poison in the bloodstream of our democracy,” Cheney said at a fundraising event with the conservative American Enterprise Institute at Sea Island, Georgia, according to a person familiar with the event and granted anonymity to discuss it.

“We can’t whitewash what happened on Jan. 6 or perpetuate Trump’s big lie. It is a threat to democracy. What he did on Jan. 6 is a line that cannot be crossed.”

“I have heard from members concerned about her ability to carry out her job as conference chair, to carry out the message,” he said. “We all need to be working as one if we’re able to win the majority.”

The fight between the two is viewed by other GOP leaders as a distraction, and many rank-and-file Republicans blame her for prolonging it rather than simply letting the former president’s claims go unanswered.

One top Republican congressional aide said McCarthy had weeks ago urged Cheney to stop talking about Trump, and her failure to do so has boosted frustration with her.

McCarthy, who delivered a speech supporting her when House Republicans privately voted to keep her in February, will not do that this time, said the aide, who spoke on condition of anonymity to describe internal conversations.

Asked about McCarthy’s comments on Tuesday, Cheney spokesperson Jeremy Adler said in a written statement, “This is about whether the Republican Party is going to perpetuate lies about the 2020 election and attempt to whitewash what happened on Jan 6. Liz will not do that. That is the issue.”

In Wyoming, far from riding out the criticism, Cheney, the daughter of former Vice President Dick Cheney, is on the defensive. She already has four Republican primary opponents for next year’s election.